It was a 6-hour drive from the Can Cau market on Saturday to Hanoi where we checked back into the Silk Path Boutique Hanoi in the heart of the city on Hồ Gươm, the Lake of the Sword.

Sunday morning, Loc took us on a quick tour of the major sites in Hanoi, starting with Ba Dinh Square, the center of the governmental district. We opted to visit Ho Chi Minh’s tomb from the street, rather than stand in what looked like a mile-long entry line to view Uncle Ho’s embalmed body. 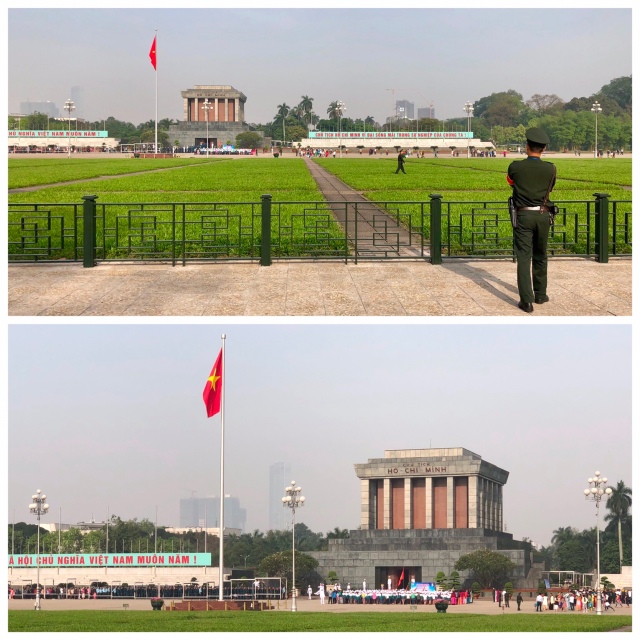 All over Vietnam the newest and finest buildings are painted a yellow, cheddar cheese color. Unsurprisingly, it turns out that these are all government buildings: city halls, administrative offices, military barracks and schools (although public education is not free in Vietnam). Funny how government bureaucrats the world over can always find money in the budget to build themselves nice offices while roads remain in disrepair, riddled with potholes.

Northwest of Ho Chi Minh’s mausoleum is the President’s residence, the “White House” – or maybe I should say the “Yellow House,” home of the Big Cheese, top photo, below. Also facing onto Ba Dinh square is the Communist Party’s Central Committee Building (not pictured) and the National Assembly Building, bottom photo, below. Together, these three buildings house the heads of state and government in Vietnam: the President, the Prime Minister; and the General Secretary, the Communist Party chairman.

In prior posts I’ve written about the Vietnam War up through the Tet Offensive in 1968. Most of the fighting took place in South Vietnam to this point, but, as I said in those posts, Tet was the turning point and the beginning of the end of America’s military involvement in Vietnam. At the end of March 1968, LBJ announced that he would not seek a second presidential term and in May peace talks began in Paris between the U.S.A. and North Vietnam. In November, Richard Nixon was elected President of the United States.

Nixon, for all his faults, was a master of foreign policy. He was knew that American public opinion had changed and soon after taking office he redirected policy in Vietnam to bring the war to a close, starting with a secret bombing campaign to destroy North Vietnamese military bases and supply lines in Cambodia, followed by a withdrawal of U. S. combat troops from Vietnam and “Vietnamization” of the conflict, that is, the transfer of military responsibilities to South Vietnam and ARVN.

In 1971, to the consternation of North Vietnam, Nixon pursued normalization of relations with China, the North’s ally and supporter, and in December 1972 Nixon authorized a bombing campaign in North Vietnam targeting Hanoi and Haiphong that was designed to force the North Vietnamese to make further concessions in the continuing peace talks in Paris that had dragged on interminably to this point.

The result of the bombing was a negotiated cease-fire in January 1973. The military draft was canceled and all American troops where withdrawn and brought home by the end of the year.

Nixon’s bombing of Hanoi by B-52s for 12 days, “Operation Linebacker II,” was not without controversy or American casualty. Sixteen B-52s were shot down (the Vietnamese claim the number was 34), together with 12 tactical aircraft; 43 airmen were killed in action and another 49 were taken prisoner. The targets were military and industrial, but undoubtedly there was considerable collateral damage. Hanoi claimed that 1,624 civilians were killed.

One B-52 that was shot down crashed in the heart of Hanoi, its wreckage left as a memorial of sorts. We visited the site. Some entrepreneurial Vietnamese has capitalized on the event, opening the “Cafe B-52,” visible across the water, below. The claims on the nearby placard are quite an exaggeration, but the victor writes the history, at least for its domestic audience.

From here, we hopped back into the van and drove just a short distance to the Hoa Lo Prison, infamous to Americans as the Hanoi Hilton. This prison was built by the French during their occupation of Vietnam to house political prisoners, but during the Vietnam War, the Viet Minh repurposed it to house American prisoners of war.

The most famous POW imprisoned in the Hanoi Hilton was Lt. Commander John McCain who had been shot down by a surface-to-air missile in October 1967 while on his 23rd bombing mission over Hanoi. He fractured both arms and a leg when he ejected from his doomed A-4E Skyhawk and nearly drowned when he parachuted into Truc Bach lake, just north of Ba Dinh square, but Vietnamese soldiers captured him, bayoneting him and breaking his shoulder with a rifle butt in the process. He was taken prisoner and interred for nearly 6 years – in solitary confinement for 2 of those years – part of the time in the Hanoi Hilton.

Most of the Hanoi Hilton has been demolished, but the front gate and part of the structure, including some of the cells, still remains. 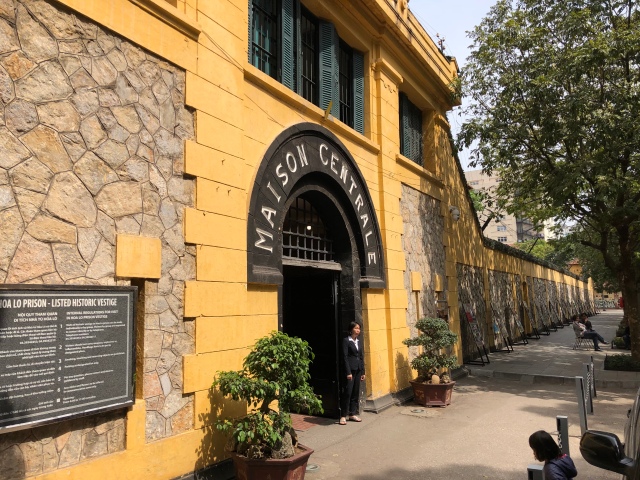 Although the United States had withdrawn from Vietnam by 1974, North and South Vietnam continued to fight and by 1975 the North had captured Hue and was taking aim at Saigon. By now, the United States military was completely out of Vietnam, with the exception of the guards at the U. S. Embassy in Saigon which was evacuated by helicopter on April 29th. There’s an iconic photograph from the front page of the New York Times depicting one of the final flights “from the embassy” (see, below left), but the building in the photograph was actually a CIA safe-house. When we were in Saigon, Loc got access to the top (below, right) for us to take our own airlift photo.

After our visit to the Hanoi Hilton, Loc took us through a street-front shop then down a long hallway, avoiding scooters on their way out, to a staircase that went up four stories…

… to a rooftop coffee shop for our final “egg coffee,” a Vietnamese coffee with an egg yolk whipped into it. I had two.

Coffee was followed by a fried fish lunch at a restaurant that has been operated by the same family since 1871, then back to the hotel. Once we were packed and rested, Dale and I went out for a walk around the lake.

The city closes the surrounding streets to cars and scooters on the weekend and it seems the entire city comes out to promenade. As we walked along, four college students approached us and asked if we would participate in a survey. “Sure,” we said, but the “survey” was really just an excuse to start a conversation. These girls really just wanted to talk with Americans to practice their english and we were happy to oblige, chatting with them for half an hour.

Completing our sojourn around the lake, we approached the front of our hotel and a mini-LeMans race in progress! All weekend, the roadway here was one big bumper-car emporium. 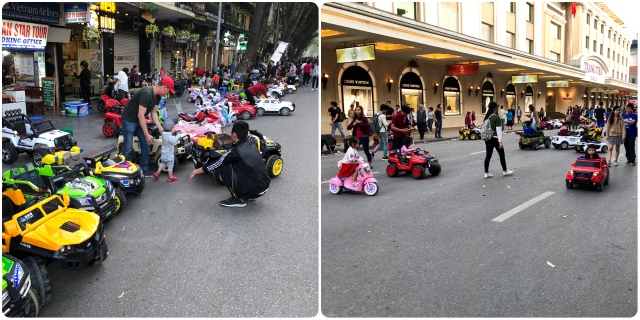 The kids were adorable here at the end of the road and the end of our time in Vietnam.

We had a great time traveling with Loc, Bill, Emily, Bob and Annie for nearly a month in this amazing and vibrant country. I tagged most of the places where we spent the night, went on an excursion, or thought were special. We drove the entire country with the exception of the segment from Da Lat to Da Nang. I didn’t realize it until I edited the map, below, but we spent several days north of the southern reaches of China, including being north of Shenzhen, Guangzhou and Hainan Island, as well as the city-states of Hong Kong and Macau, former possessions of the Great Britain and Portugal, respectively. 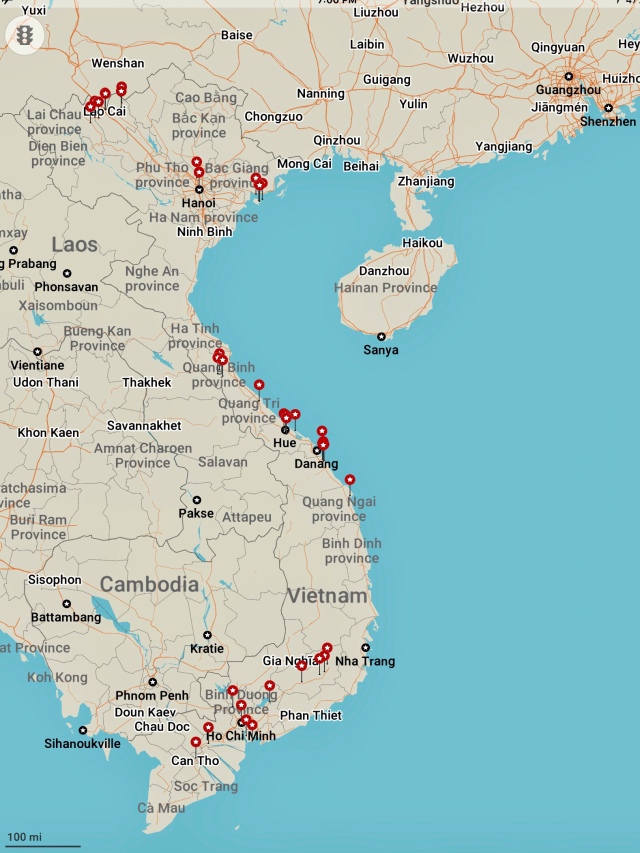 The trip was made especially memorable by having Loc with us the entire time: to plan and schedule our travels; to energize us when we were tired; to explain things we didn’t know or understand; and to share his enthusiasm and love for his country. We started as guide and guest, but finished as friends. Thank you, Loc.