In biblical times, Istanbul was known as Byzantium, founded by Greeks around 600 B.C. The city later came under dominion of the Roman Empire.

In 285 A.D., the administration of the Roman Empire was divided in half and in 324 A.D., the Roman Emperor Constantine moved the capital of the eastern division of Rome to Byzantium, renaming it Constantinople. Given that the people of Constantinople were originally Greek (and subsequently, Christian), the area moved away from the paganism and Latin language of the Romans, toward Greek and Christianity (of the Greek Orthodox variety). By 395 A.D., Rome had formally divided into two empires with Constantinople continuing as the capital of the Byzantine Empire.

In 532 A.D. the Byzantine Emperor Justinian began construction in Constantinople of a massive Christian basilica named the Hagia Sophia to replace the original Greek Orthodox church, built in 360 A.D., that had been destroyed in riots in the 500s. The design of the Hagia Sophia was unique: a domed church. It was built in short order and continued for nearly 1,000 years as the largest cathedral in the world.

I showed a picture of the exterior of the Hagia Sophia in yesterday’s post. Today, we visited the interior. It was extremely crowded on the ground floor…

…so we found a passage up to the mezzanine, not only to avoid the crowds, but also to get a better view:

You’ll notice two things in the picture, above: the Arabic script; and the lack of pews.

The reason for the first is that in 1453, Constantinople was sacked and the Byzantine Empire was conquered by the Ottoman Turks. Immediately after entering the city, the muslim Sultan Mehmet II ordered that the Hagia Sophia be converted into a mosque, renamed the Aya Sofya. As a result, all the Christian symbols and relics were destroyed or removed and the walls and mosaics plastered over. Minarets were added to the exterior. The script you see was later placed around the dome, proclaiming the names of Allah, the Prophet Muhammed and the first four caliphs.

Thus, the Hagia Sophia Christian church became the Aya Sofia, an Islamic mosque, which it remained until the Ottoman Empire was, in turn, defeated in WWI and the Turkish Republic was founded in 1923 as a secular nation. Religion was, consequently, removed from the great building. It is now a museum and tourist attraction. 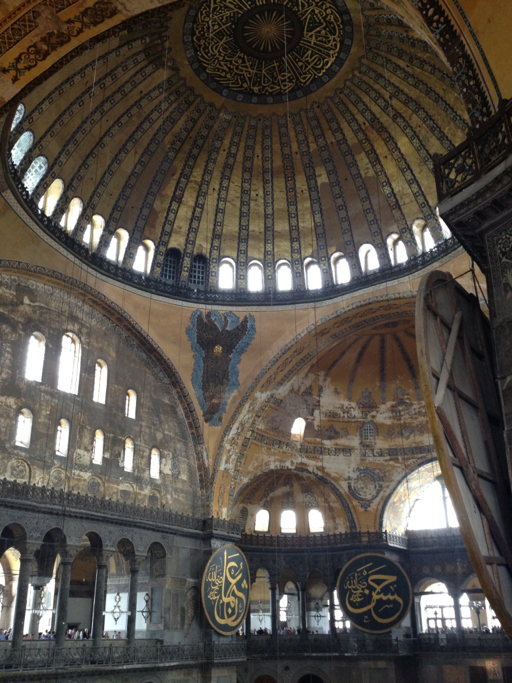 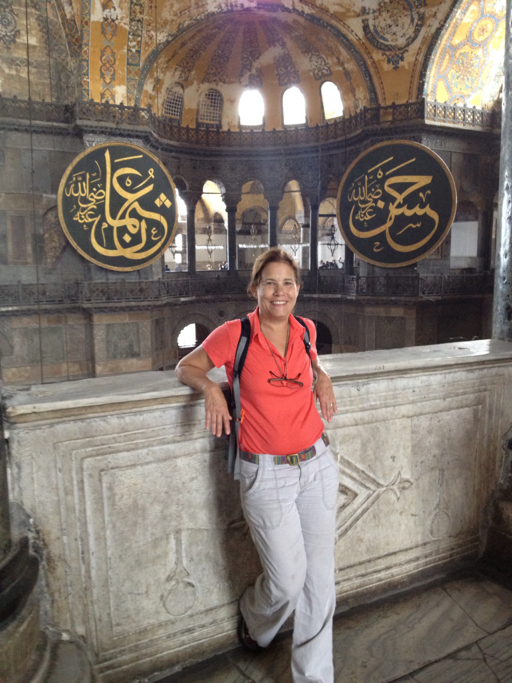 We finished our visit of the Hagia Sophia’s mezzanine and went back downstairs to where the altar would have been. After the fall of the Ottoman Empire in WWI, the new Turkish nation set about restoring the Hagia Sophia to its former glory, removing the plaster that the Ottoman Turks had put up; underneath, they found a number of the old, Christian mosaics. This one is on the dome, above where the altar would have been:

And this mosaic from the 900s is found in the southwest exit: the Virgin Mary holding Jesus, flanked by Emperors Justinian and Constantine.