Yesterday afternoon as we walked back toward the hotel, we thought we would stop at the Blue Mosque. As we approached the steps, a young Turkish man walked up to us and said that we could not go in the mosque just then because prayer was in process and it was a holy day; we would have to wait until Saturday to visit. He then started explaining various features about the mosque, saying that he was not a tour guide or anything, just being friendly. Dale mentioned that she needed to use the restroom and our new friend said, “Don’t use the ones around here, they’re dirty. My family has a shop nearby with a clean restroom that you can use. Follow me.”

Dale wanted to say no and just go back to the hotel and we both sensed that something was up with this guy, but I wanted to see what the scheme or scam was and Dale really had to go, so we followed him back to – wait for it – his family’s carpet shop! Surprise, surprise!

We did plan to buy some Turkish carpets on this trip, so we went on into the shop and Dale used the restroom while they asked me to sit. When she returned, our new friend’s “uncle” introduced himself and said, “Come up stairs where it’s air conditioned and let me tell you about Turkish carpets. No obligation.” So, up we went.

Dale had read up on carpets and the Turkish sales technique, so we weren’t total newbies and we did want to buy carpets, so we sat and chatted and were served tea and Turkish coffee. Very exotic. 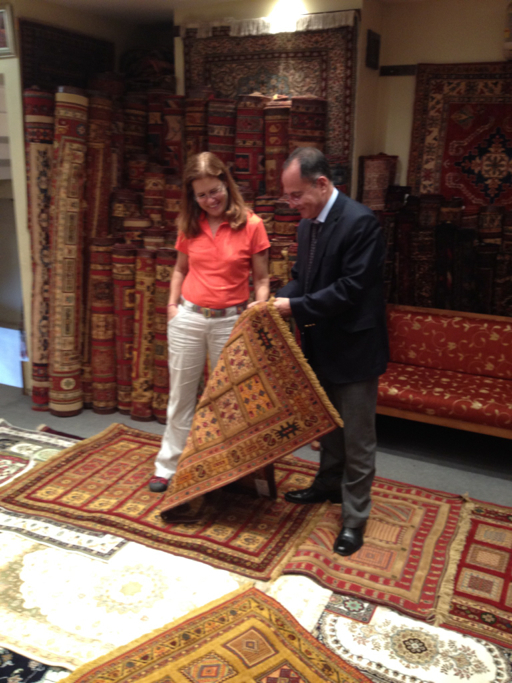 “So, you see, these carpets are all hand made. Some are all wool, some are wool and cotton, some are all silk – those are the most expensive – and some are a combination of wool, cotton and silk. These are quality rugs, tied with two knots for each thread; not like those Iranian rugs that are tied with only one knot. See here, the more knots per inch, the higher the quality. Silk is so fine that there are many, many knots per inch.”

They threw rug after rug after rug on the floor. Uncle Erdogan’s helper had a real flair for it, spinning the carpets like frisbees, then flipping them to show how the carpets with silk in them changed color, depending on the angle from which they were viewed. It was a real show.

After two hours of choosing and rejecting, drinking tea and coffee, haggling over price, changing our minds and talking politics (the current Turkish President’s name is also Erdogan and Uncle had definite opinions about his namesake: “He’s an idiot!”), we reached an agreement to buy six carpets. Here’s the one for my office:

And here’s one that will go on the wall in the family room; it’s really a piece of artwork, all silk:

And one for the bedroom:

But, here’s the nicest one of the bunch, silk and cotton for Dale’s office:

We might have been suckers; all the guide books tell you that you shouldn’t do it this way – visit several shops so you can compare prices. But, the guidebooks also say that you should aim for a 40% discount and we beat that.

Still, I think Uncle Erdogan got the better of me. After his final counter-offer to my final counter-offer, I groaned and said, “Okay, I’ll split the difference with you.” He told me how I was such a good negotiator and how I was getting such a great deal, then he smiled a wicked smile and, before I could flinch, grabbed and shook my hand, sealing the deal before Dale and I could make our escape.

Really, though, we were pleased. We can’t imagine going through that routine more than once.

Now let’s just hope they actually show up when we get back home.