We got off the river cruise one stop before the southern terminus so that we could walk along the Bosphorus to the Tünel, an underground funicular, that would take us up to Taksim Square and the Galata Tower at the top of the hill overlooking the Beyoğlu district of Istanbul.

As we exited the Tünel, we found ourselves immediately in the midst of some sort of rally or protest, we didn’t know which.

We had been seeing Turkish flags flying all over the city and thought it might be some sort of holiday, but we couldn’t find anything in the guidebooks saying that was the case. So, Dale asked a family that was standing nearby waving flags what was going on. They were very friendly (like most folks here in Turkey) and they told us that it was the Turkish national holiday to celebrate the founding of the country by Kamal Atatürk. That’s Atatürk in the big banner draping the building, flanked by two Turkish flags: 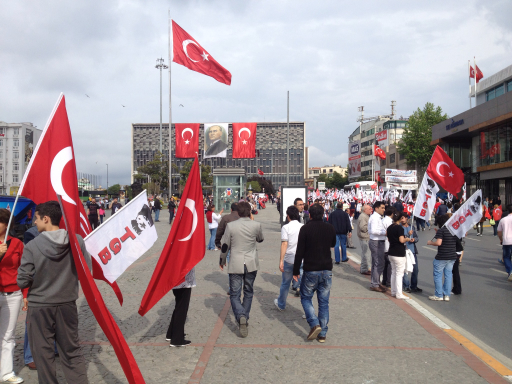 During WWI, Atatürk was an officer for the Ottoman Empire which had sided with the Germans; they lost the war. When the Allied forces came to Turkey after the war, Atatürk led a movement for independence and defeated the Allied takeover, thus establishing the Turkish nation in 1923. He is considered the Father of the country; the Turkish George Washington.

We stood and watched the parade go on and on and on. The marchers were mostly young people, apparently members of the TGB political party.

They folks we talked to had simply said that the TGB is a youth group, but when I tried to research it on the internet today, I had the distinct impression that it’s something more than that; and that the parade was something more than just a celebration. I couldn’t find anything about TGB in English, but using a translation engine, I was able to interpret a little of the TGB Turkish website. It seems that it is a relatively new youth movement, started in the universities a couple years ago, to oppose “imperialism” by the United States and the European Union and to continue the “revolution” begun by Atatürk. Hmmm, sounds kinda ominous. And there was definitely a nationalist fervor in the air, though we didn’t ever feel threatened, obvious Americans that we are.

We started walking down the hill along (but in the opposite direction of) the parade route on İstiklâl Caddesi, which also happens to be the main up-scale shopping street. Even after the marchers had passed, İstiklâl Caddesi was unbelievably crowded: 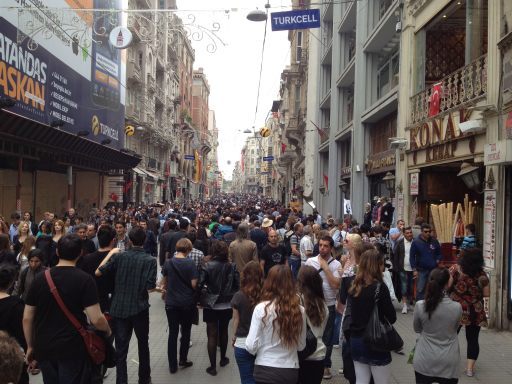 About one-quarter of the way down, we came upon the Galata Tower, built in the 1300s (I posted a picture of the Galata Tower yesterday that I took from the Bosphorus river cruise): 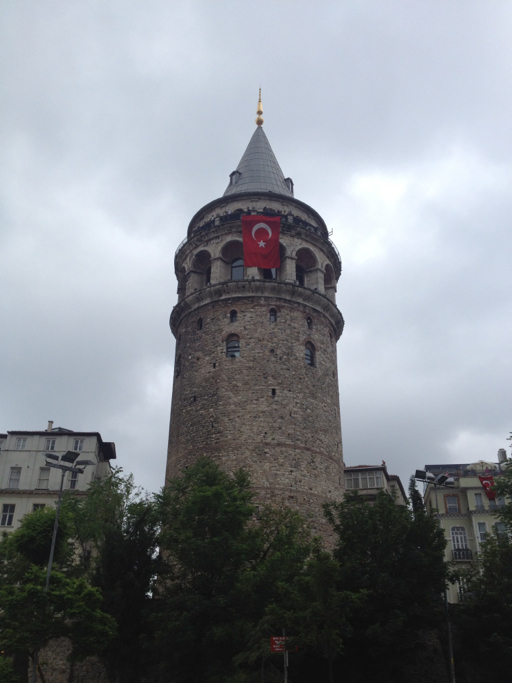 We continued on down İstiklâl Caddesi to the Galata Bridge, passing the clothing stores, then the musical instrument stores, then the electronics stores, but only the fruit shop and fish mongers were picturesque: 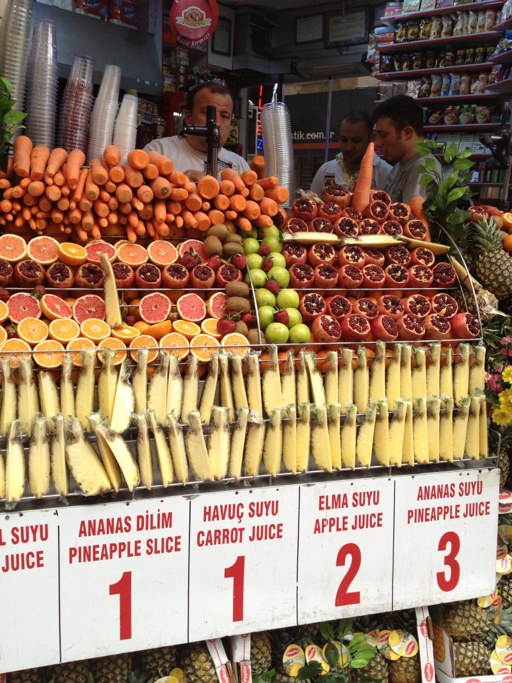 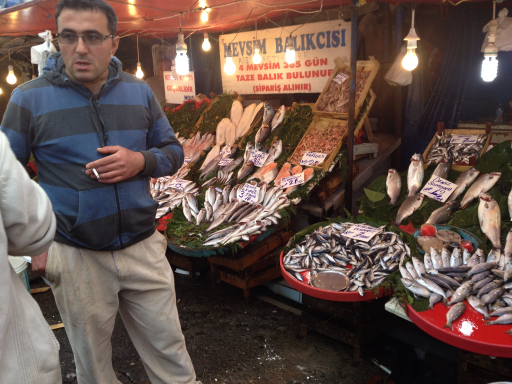 We crossed the Golden Horn over the Galata Bridge, careful to avoid getting hooked by the fishermen…

…but we stopped right in the middle of the bridge to watch the chaos of the ferries jockeying for position. I don’t know how these guys avoided an Andrea Doria moment. They drive their boats as wildly as they drive their cars around here. 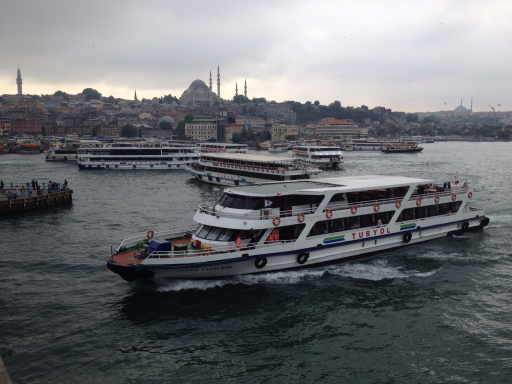 On the far side of the Galata Bridge, there was just as much pandemonium with the pedestrians. 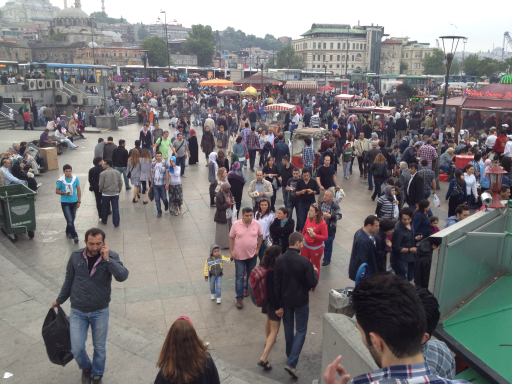 We wandered around and people-watched for a while, but it had been a long day, so we caught the tram back to the old city and our hotel.