Cappadocia is famous for its strange geological formations and cave dwellings. The soft rock that makes up the ground and hills is called “Tuff.” The guide book says that 30,000,000 years ago, the three volcanoes in the region erupted and covered the plateau with ash and mud. Tuff is the result of the compression of this ash over the eons. It feels similar to sandstone; in fact, when I have bumped up against the wall in our hotel room (which is carved out of the Tuff cliff face), sand-like grit rubbed off.

For millenia, men have worked the hills and rock formations with metal tools, probably similar to pick axes and chisels, cutting houses, store rooms and churches in the rock.

Yesterday, after taking a short nap to get over the early morning flight from Istanbul, we took a hike up the Pigeon Valley to Uçhisar. It was a beautiful afternoon, cool and sunny.

We thought this cave dwelling was cool; little did we know…

Pigeon Valley was spectacular with fascinating rock formations on all sides. 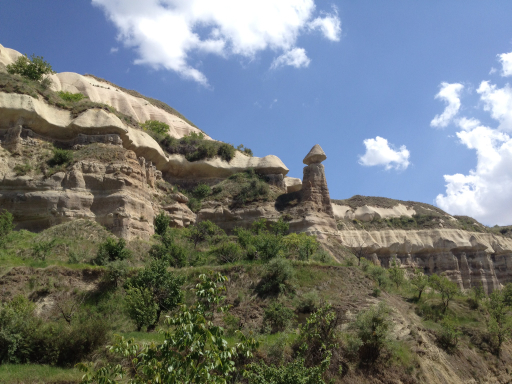 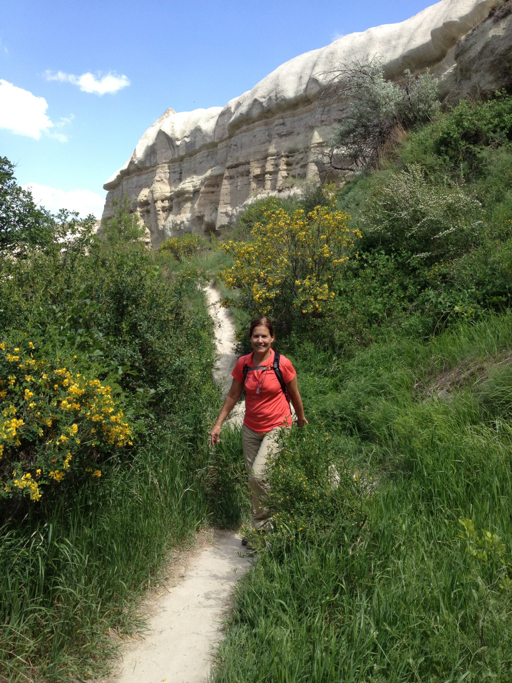 The hike up the valley to Uçhisar was 3 miles more or less with about an 800 foot rise in elevation by the time we got to the top of the highest point in the village. That’s our destination way up there: the butte on the top left of this picture (if you look closely, you might see a flag on the very top):

Actually, that butte was, effectively, an apartment building centuries ago, although it’s advertised now as the “Uçhisar Castle.” The placard at the entrance to the Castle says that years ago, all of the villagers lived in apartments carved into this rock formation, something like 400 families, but the honeycombed structure started to cave in, so all the people moved out. Here’s Dale standing in front of the Castle’s base about 3/4 the way up the butte. 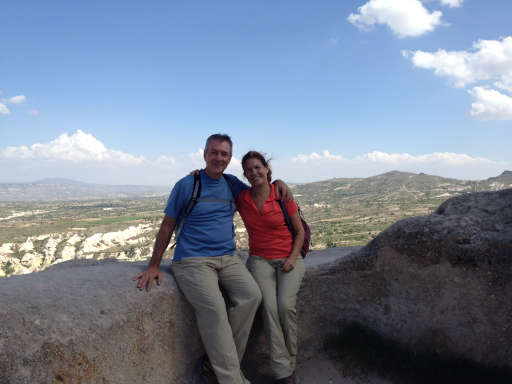 …all the way to the pinnacle where a big, Turkish flag was on display, the one you might have been able to make out in the earlier photo. 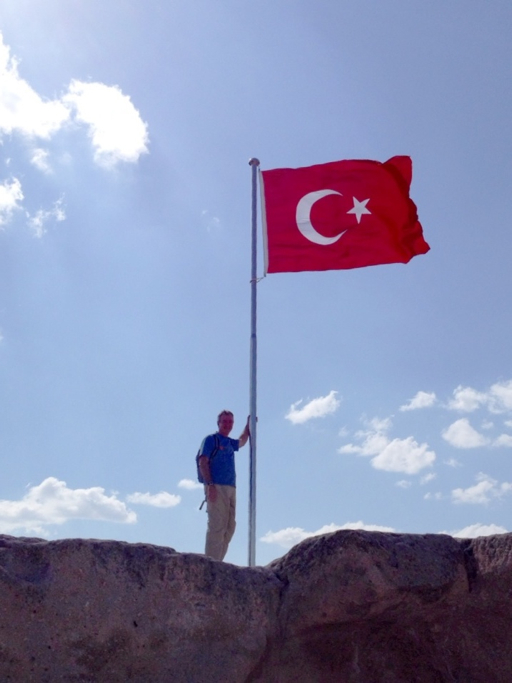 There was quite a view from the top. Our starting point, the village of Göreme where our hotel is located, is at the top left of this picture, way off in the distance. 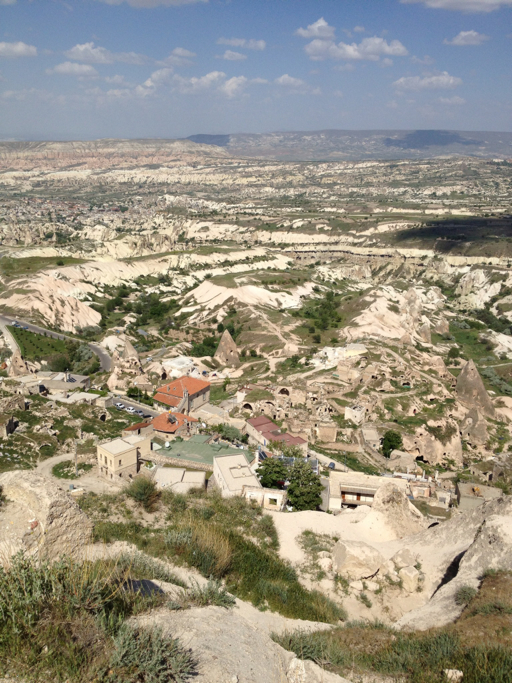 Here’s where the residents of Uçhisar Castle live today: 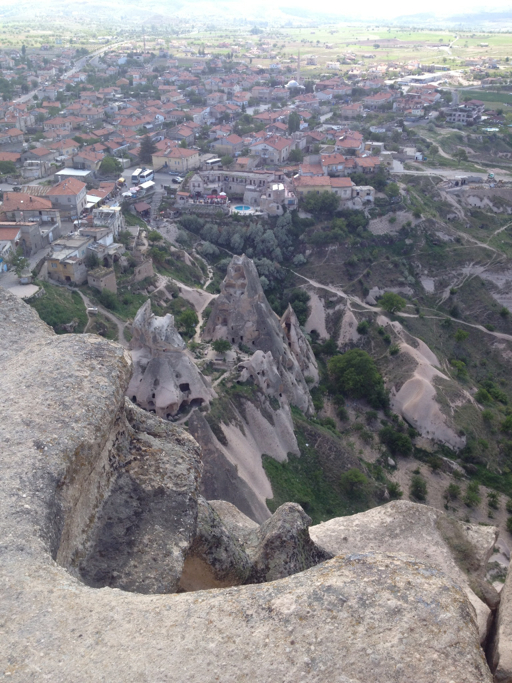 Before exploring the Castle, I needed to relax in my rock recliner for a few minutes.

The cave apartments were not all that big and the outer rooms seemed to have already lost walls and compartments from erosion. 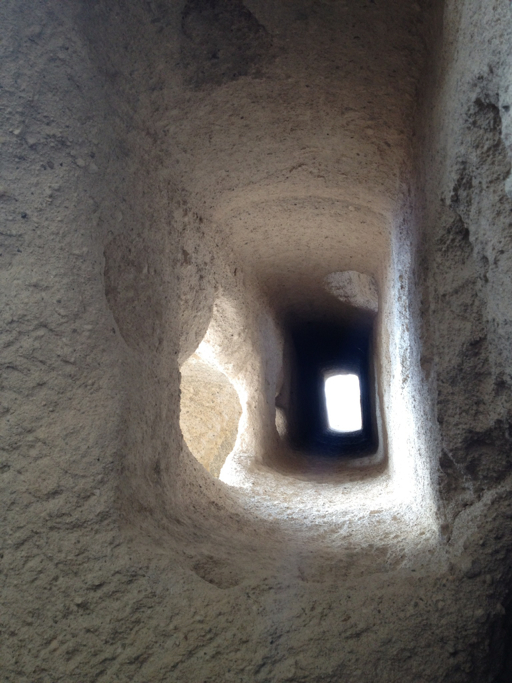 We made our way back down the Castle, stopping to take in the scenery.

As we made our way down, we turned and looked back up to where we had been. 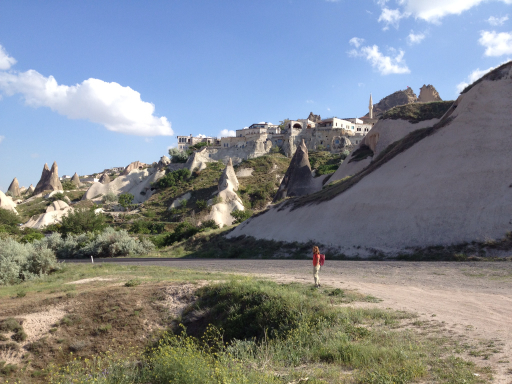 It was quite a strenuous hike, and fascinating; but the best was yet to come on the return trip to Göreme. 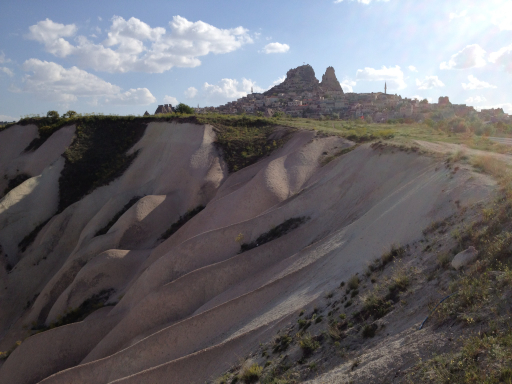