About 20 miles west along the coast, we stopped to visit the Roman ruins at Aspendos, primarily because of its Theater and Aqueduct. These structures, along with a Basilica, Gymnasium, Hippodrome and several other public buildings, were built in the late 2nd century A.D., during the reign of Marcus Aurelius.

The Theater at Aspindos is said to be in the best condition of all the Roman Theaters, and I believe it. Like the Theater in Side, this one held at least 15,000 spectators and perhaps as many as 20,000. They were each about 60 feet tall from the floor to the top row of seats. And they were both originally built for theatrical performances; however, unlike the Theater at Aspindos, the Theater at Side was also used for gladiator contests and, later, for religious events.

These pictures are of Aspindos as we walked around the top row: 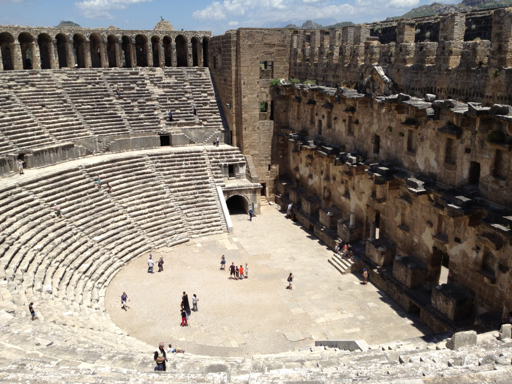 It was common to build these structures into a hill, which is how the Theater at Aspindos was constructed, as you can see in the following picture. The Theater at Side was unique in this regard; it was built on level ground.

Dale walked around to the other side and I went down to the floor of the theater. You can see her in red, sitting in the top row in this picture:

I said her name from the Theater floor in a normal speaking voice, and even with all the noise from the other people, she was able to hear me! The acoustics were phenomenal.

By the way, that arch at the lower left was one of two public entryways into the Theater, the other being on the other side of the stage, directly opposite this one.

After the Theater, we walked up to see the Basilica, passing the Hippodrome, where horse and chariot races would have taken place, off in the distance.

The outer walls of the Basilica were still intact. 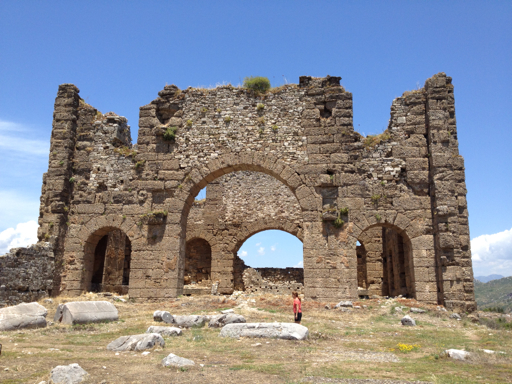 Aspindos also had a Nymphoneum fountain. That’s it to the right of the Basilica. 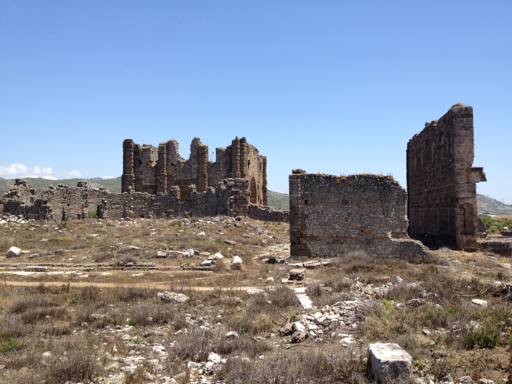 From this vantage point on the top of the hill upon which upper Aspindos was constructed, we went looking for the Aqueduct. We found it on the back side of the hill. It brought water to Aspindos from that low mountain on the right, making a slight turn just before reaching Aspindos. If you look closely, you’ll see that the Aqueduct ran across this valley and that it was originally much higher than what now remains.

Here’s a closer view from the top of Aspindos of the section at which the Aqueduct changed direction.

We left the top of the hill and returned to the car, then drove around to the Aqueduct. Here, you can see it running across the valley, minus a few sections.

Near the hill upon which upper Aspindos sits, the Aqueduct was still at least 40 feet high.

The locals had set up trinket tables all around the base of the Aqueduct to sell to the tour buses that came through, many of which carry German tourists.

As soon as I got out of the car, an old woman in traditional dress and headscarf hobbled over to me with an orange as a “gift” for Dale. My repeated “no, thank you,” went unheeded and, when I finally held out my hand to accept the orange, she dropped it and a pair of earrings and a key chain into it saying, “Du kauf, Du kauf” (meaning, in German, “You buy, you buy!”) I was stuck. I reached into my pocket and pulled out five 1 Lira coins and counted out 3 for her. She smiled an ear-to-ear, toothless grin and snatched the other 2 coins as well. “Auf wiedersehen!” she said, as she shuffled away.