Yesterday, we drove from Kaş to the larger city of Fethiye where we plan to stay for three nights. This part of Turkey, called the Turquoise Coast, is replete with Lycian ruins. We stopped at three of them: Patara; Letoon; and, Xanthos. 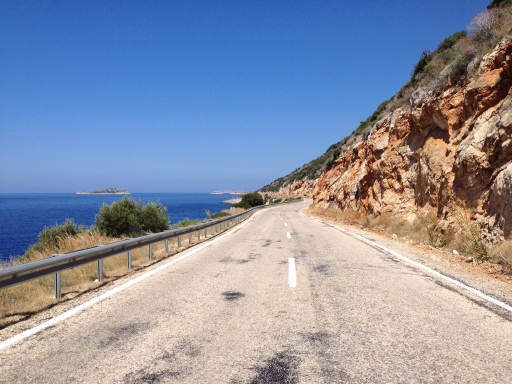 Patara, it turns out, is the birthplace (in the 4th century A.D.) of St. Nicholas, known to us in the Western world as Santa Claus. But to the Lycians, centuries earlier, Patara was mainly known as their best harbor and the administrative center of the Lycian Federation. Today, it is visited mainly for its white sand beach, one of the longest continuous beaches (9 miles) on the Mediterranean Sea. In fact, the parking lot was quite crowded with beach goers; very few people were there, like us, to visit the ruined city.

At any rate, the mouth of the harbor, nearly 1/4 mile wide, began to silt up in the 4th century A.D. and the formation of the beach put an end to the port of Patara. Here’s a view of what used to be the harbor entrance before it silted up; that’s an ancient Roman lighthouse up on the hill to the left.

Turning to the right, I took this photo across what used to be the main harbor, but is now a swamp, of Emperor Hadrian’s Granary, a storage depot.

The settlement of Patara dates back to at least 3,000 B.C. and it is known to have been a major Lycian city and port by at least the 6th century B.C. Like the rest of Lycia, it submitted to the Greek invader, Alexander the Great, in 334 B.C., and to the Romans in 190 B.C.

The Romans granted the Lycians a semblance of independence in 167 B.C., though Lycia remained a Roman Protectorate, and the Lycians then established a representative form of government called the Lycian Federation. Apparently, Patara was the functioning capital of the Federation; at least the governmental assembly met here in the Bouleuterion, a Theater-like structure built here around that time. The framers of the United States Constitution made reference to the Lycian system of government in forming our federal union.

In 43 A.D., the Romans dissolved the Lycian Federation and incorporated the region into the Roman Empire as a province. Patara blossomed under the Romans who made a number of public improvements to the city, including this ornamental Arch at the gate to the city.

It appeared to us, though, as we wandered around, that the Lycian construction was every bit as substantial as the Roman buildings. Like all large cities along the Turkish coast, there is a Theater here, although this one was built by the Lycians. Take a look at the stonework. The stones were perfectly squared off, decorative and tightly joined, though over the centuries, internal pressure has caused the lower sections to blow out and collapse.

From inside the Theater, you can see where the Lycian representatives met in their assembly hall, the Bouleuterion, currently under reconstruction by the Turkish government. 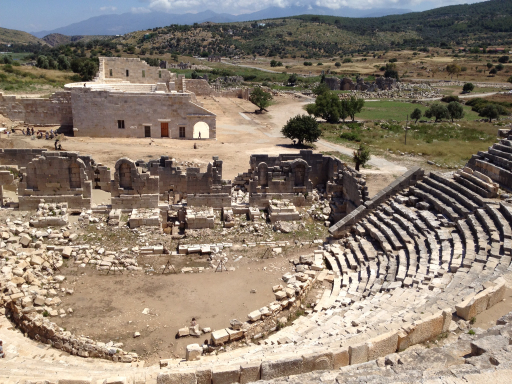 We walked around behind the stage of the Theater, between it and the Bouleuterion, to look at the current archeological work underway. Here, at the back of the Theater’s stage, you can see how much the sand and dunes have covered up.

And it looks like they are continuing to find additional ruins between the two buildings.

We left the Theater and Bouleuterion and walked over the hill into the old city, looking back, one last time, at the Theater before making our way down: 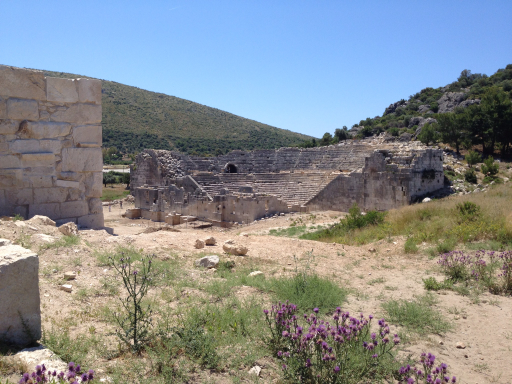 At the bottom of the hill, we walked along and then over the old city walls, built by the Romans, which are now crumbling away, though sections of the ramparts remain. 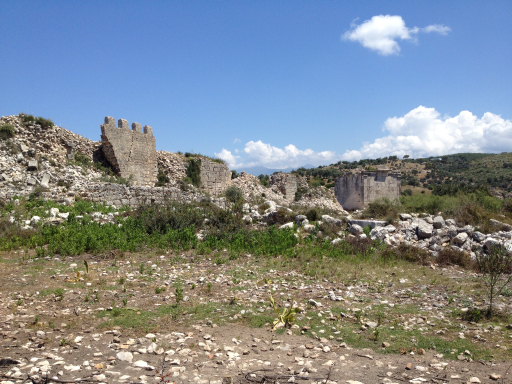 Inside the walls, there are a handful of Lycian ruins. You can see why we were impressed with the Lycian construction in this picture. 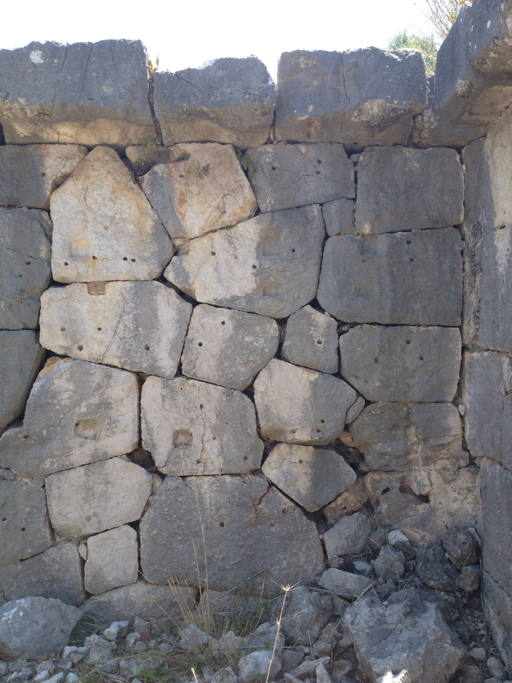 We discovered that sheep are the main occupants of Patara today and they tend to favor the churches and temples for some reason. Religious sheep, who would’ve guessed?

Since the sheep didn’t seem to honor any particular god, I nominated myself and climbed up on a nearby pedestal so they would know who to baa down to.

Further along, we came upon these pagan sheep, lounging around a 2nd century A.D. temple honoring some lesser Roman deity. 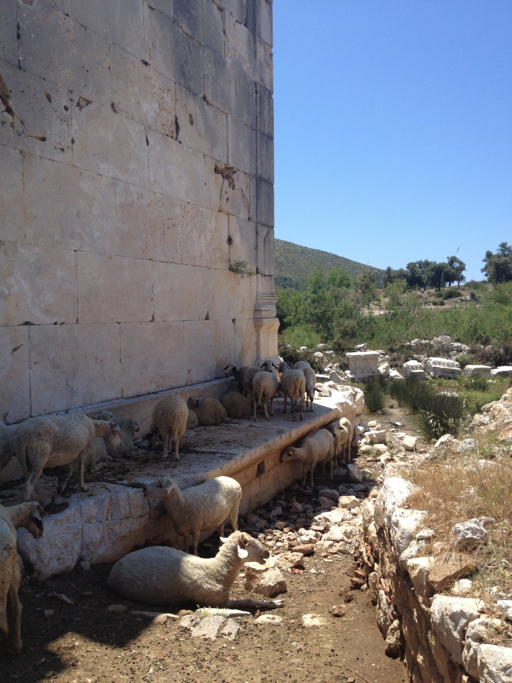 Dale looked around to the backside of the Temple to make sure we had the whole lock assembled.

…looking into a shop along the right hand side as went…

…and ending up back at the Bouleuterion. 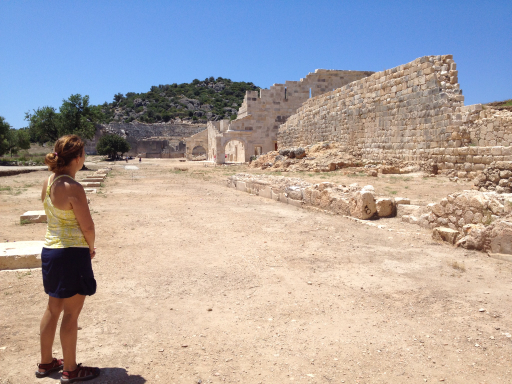 The Turkish government has done an admirable job restoring the Bouleuterion to its former glory. We walked inside and took a couple pictures. Here, you can see where the representatives sat; they elected a “President” annually – his seat is there in the middle. 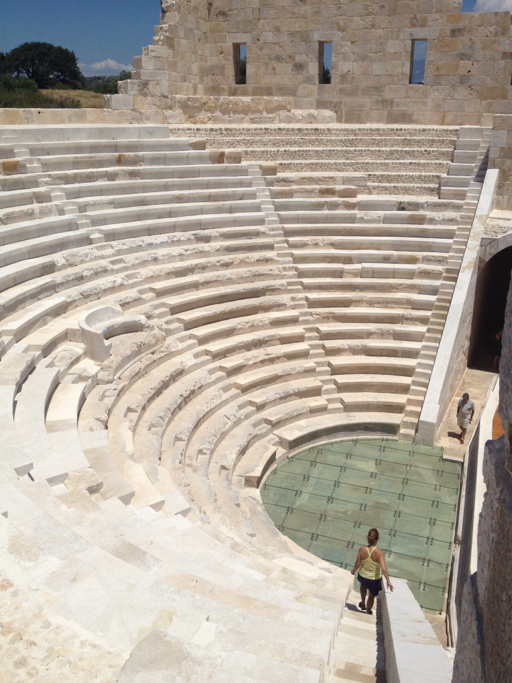 But it looked like most of the oration came from the stage.

Dale wanted to be President of the Federation, so she went up on stage to get a feel for things.