We arrived at Pamukkale at 4:30 in the afternoon yesterday, hoping that the tour buses would have already been and gone. Most had, but there were still plenty of people at the site.

The approach to Pamukkale is nothing spectacular: 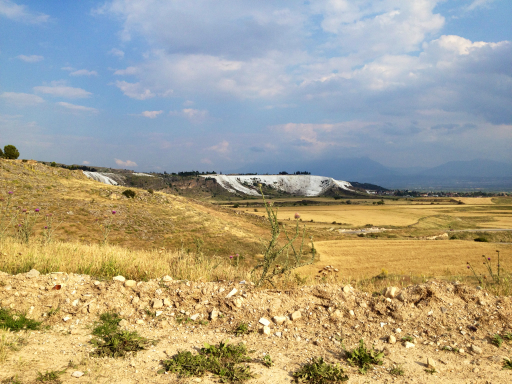 But, once atop the hill, it’s easy to see why Pamukkale is a World Heritage Site. We timed our visit to not only miss the peak tour bus hours, but also to arrive near the end of the day when the light for photography is best.

In the foreground of this picture, you can see the water-filled travertine pools in blue. The white and golden areas are dry travertine, a sedimentary rock formed by the build-up of calcium carbonate (CaCO3).

Calcium carbonate precipitates out of the thermal spring water as a result of the carbon dioxide in the water turning to gas. The resulting rock, called travertine, was used by the Romans (and it’s still used today) as a building material. I’ve heard people talk about travertine marble, but it’s actually a limestone, which, when it dries and hardens, it is a soft rock, easily cut, shaped and polished.

We were fortunate to have the sun break through the clouds while we were there.

The village of Pamukkale lies at the base of this travertine hill. Though it looks quaint in this photograph, the village is a tourist trap of the worst kind, tacky, run-down and full of cheap souvenir shops and aggressive hawkers. Driving through the main street, looking for a hotel, was like running a gauntlet of pickpockets. We rolled up our windows and locked the doors, then decided to avoid the village altogether and drive straight to the top to the public parking area.

The top of the hill is a Greek, Roman and Byzantine ruin known as Hieropolis. We skipped it in favor of the ruins of Efes which we plan to visit tomorrow. The main attraction of Hieropolis in the old days, much like today, were the travertine pools and the thermal springs that feed them. That’s a museum complex on the right, built in and around the old Roman Baths at the top of the hill. 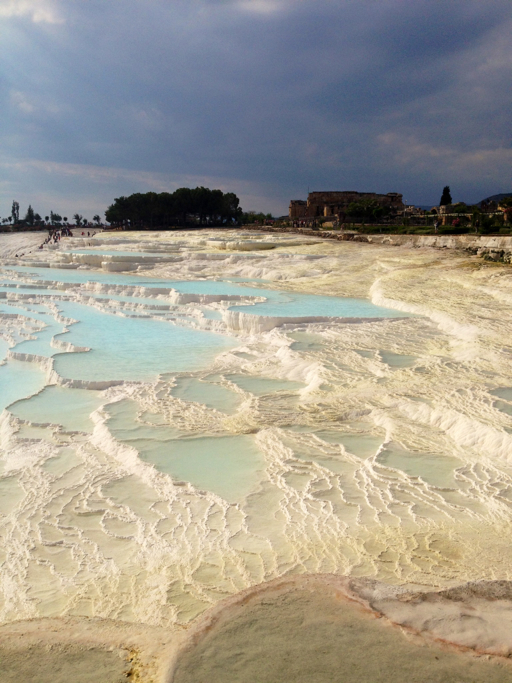 The public is allowed into the water in an area that has been reworked for that purpose.

Terraces were created to hold the water in pools, the bottoms of which are filled with soft calcium carbonate precipitate gel which hardens when dry. 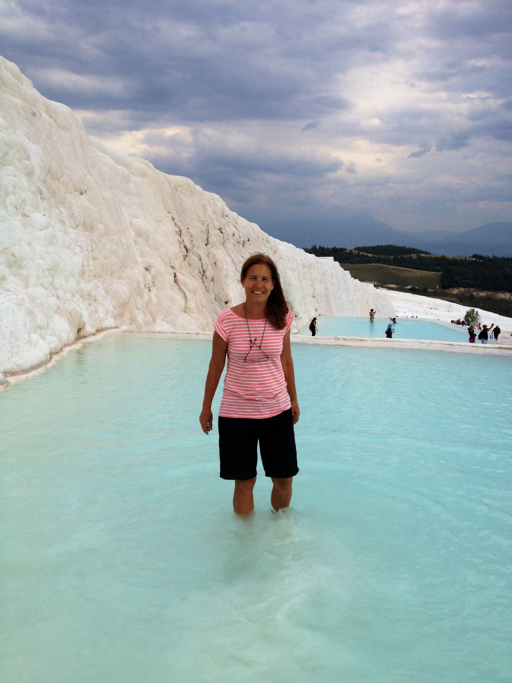 You can see how dramatically the stuff builds up over the years.

The contrast of colors was amazing. 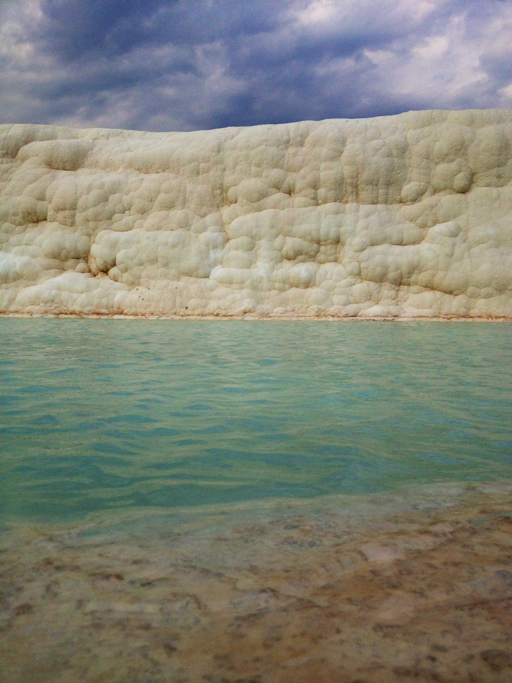 The water is around 95° F. We decided to stop and soak our tired toes for a while.

On the way out, I took a picture of the Hieropolis Theater and some of the ruins up top. 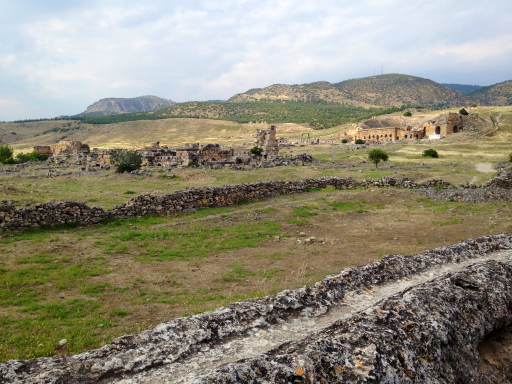 That little taste of the thermals made us wonder if there were any spas nearby, but we needed to get on the move. Since we had decided not to stay the night in Pamukkale, we had quite a drive ahead of us to the next city where we might find lodging for the night.