After getting up early to beat the crowds to Knossos, the most impressive of the Minoan ruins in Crete, we were disappointed yet again by the site being closed. The excuse this time was the national election that has been so breathlessly anticipated by the financial press.

Greece, including Crete, is a beautiful country; unfortunately, this birthplace of democracy has done its best to devise a completely dysfunctional modern government. I had read that the political system here was corrupt, but it was hard for me to believe that it could be as bad as the media claimed. I’m starting to wonder, though.

I find it very odd that all of the archaeological sites we have visited – all owned by the national government – only take cash, no credit cards accepted. Hmmm. And all restorative work at the sites seems nonexistent; no money is being put into these national treasures. Combine that with the sites and museums changing their hours of operation willy-nilly and having no staff other than the lone cashier dispensing paper tickets for cash (only) and you have a perfect recipe for embezzlement.

But I’m getting ahead of myself.

After looking over the fence at Knossos and vowing to return on Tuesday to see it and the Archeological Museum in Heraklion, we drove along the coast to Rethymnon. Here’s a view of the harbor here in Rethymnon. 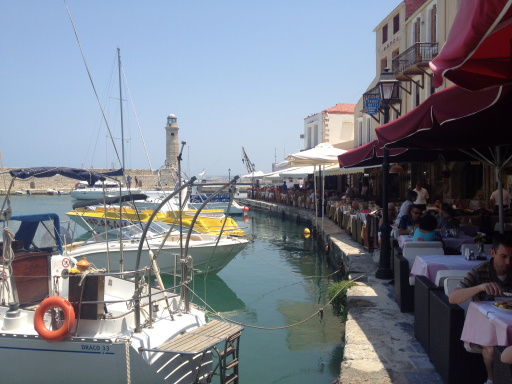 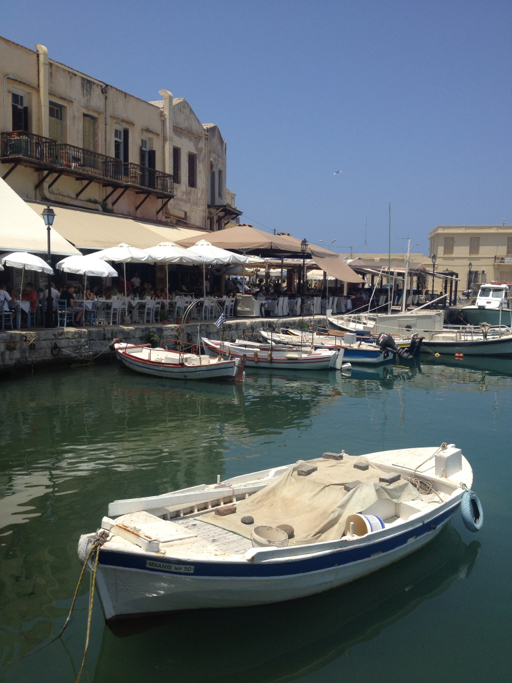 Further to the west of the harbor, sitting above the old town, we saw the massive Fortress of Fortezza, built by the Venetians starting in 1573. 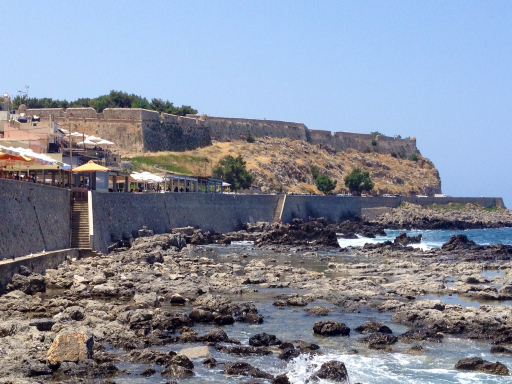 The Fortress was so impressive that Dale and I decided to walk the waterfront around it. We must have walked half a mile, at least, and never left the defensive wall of the Fortress. 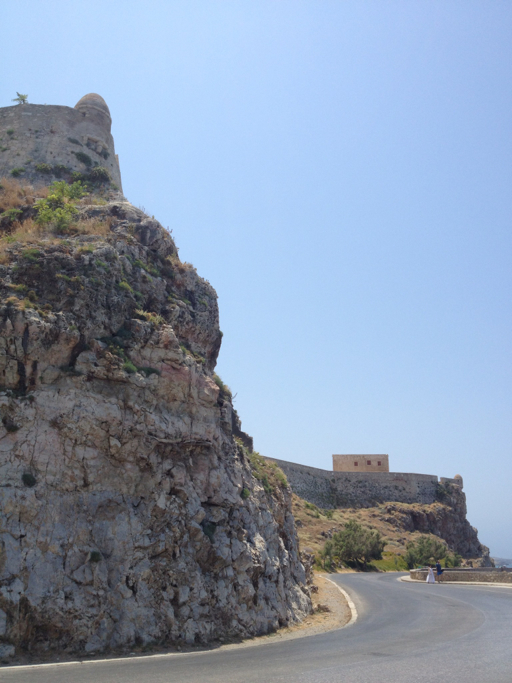 From the point that I took the photo, above, I turned around to take the photo, below, just to show how big this fortress was. 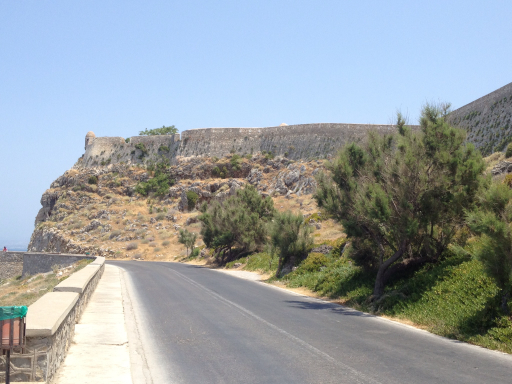 We continued into town and walked up the road into the fortress. 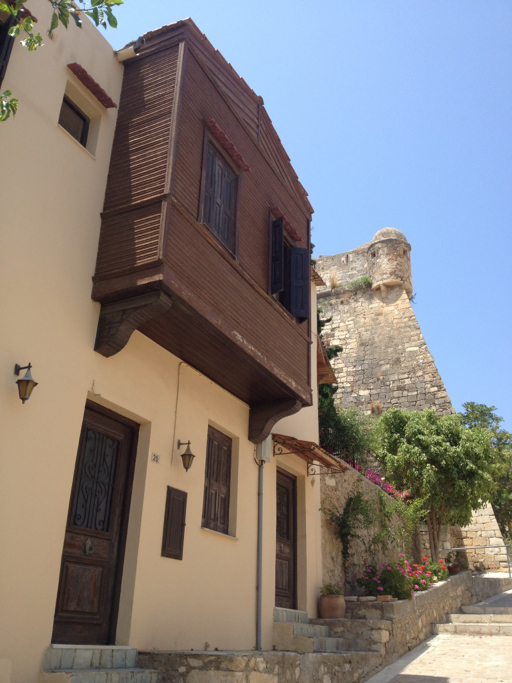 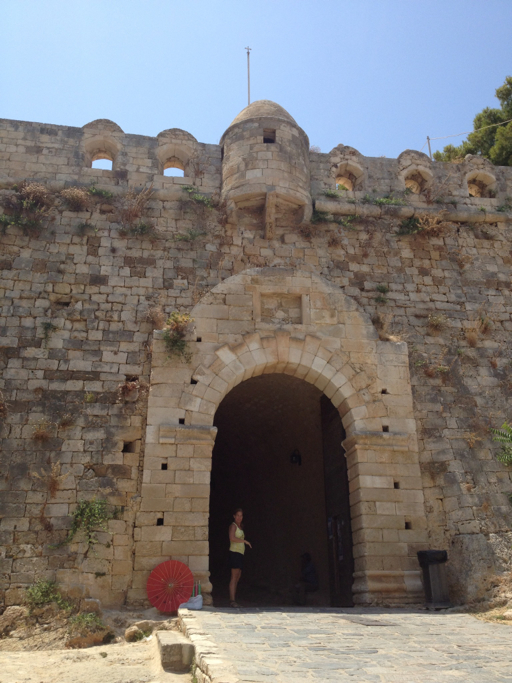 The Fortress of Fortezza sits atop a hill overlooking the town and both of its harbors, clearly a commanding defensive position against a seaborne invasion. Here’s a view looking south, back into the city of Rethymnon. The large, white two-story, red-roofed building in the center of the picture is our hotel, by coincidence, the Fortezza Hotel. 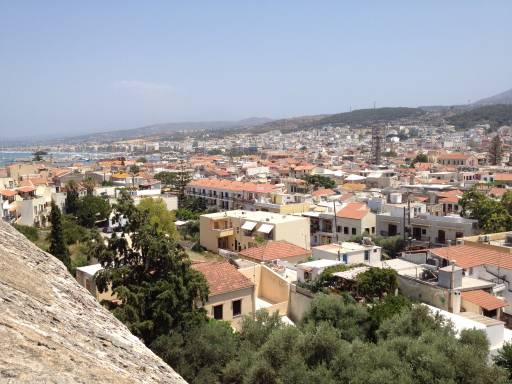 As I mentioned, the Fortress of Fortezza was built in the late 16th century, after gunpowder and cannon had been in use throughout Europe for at least a century. You can see that this fortress was built to control the harbor by cannon batteries. Here’s Dale looking out a gunport, the rocky area in the foreground was placed there in order to swivel the cannons to target a wider area. 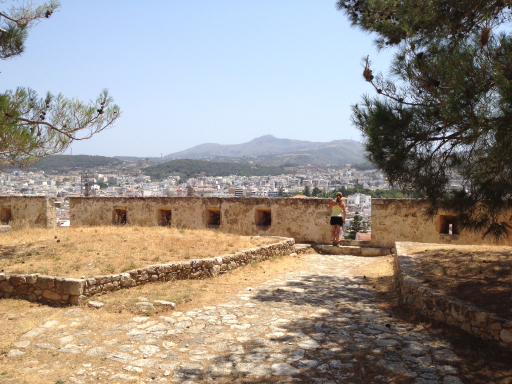 Above the main gate, the gun ports were for small arms and smaller cannon fire to defend against a land attack on the front gate. 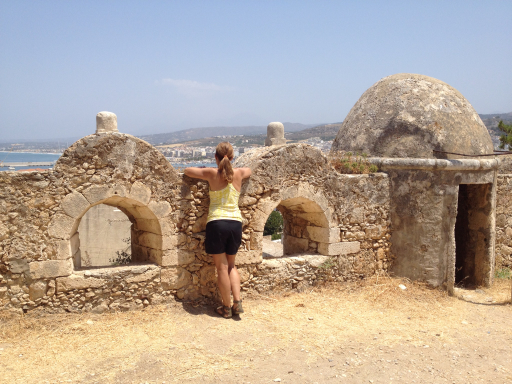 And here are several cannons, apparently recovered during excavations here, though there was no signage or explanation that we could find, they appeared to have just been left by the government to sit and rust in the sun. 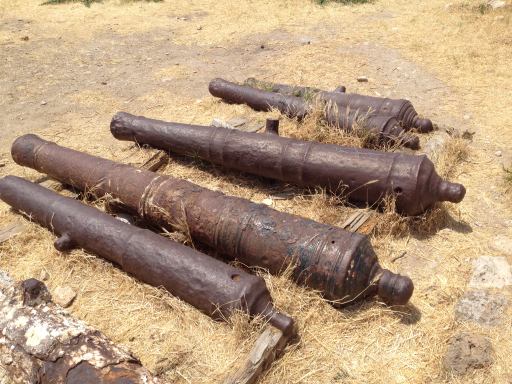 Crete had been part of the Roman and then Byzantine Empires until the time of the Crusades. But in 1204, the Crusaders conquered Constantinople and, temporarily at least, the Byzantine Empire which was carved up and parceled out to the various crusading knights. Crete was given to Boniface of Montserrat, who, in turn, sold it to the maritime trading city-state of Venice in 1212.

The Venetians had a little trouble convincing the native Greek population to let them rule, but they eventually subdued the locals and for the next several centuries, Crete was a possession of the Republic of Venice.

Being a maritime trading power, the Venetians were most interested in improving and defending their harbors throughout the Mediterranean, so they set about building fortresses like the one here in Rethymnon as the Ottoman Empire slowly became a power in the region.

The Venetians were right to worry about the Ottomans because in 1646, the Otttoman Empire did attack Crete, forcing the Venetians to eventually leave the island and for the next 200 years, Crete was part of the Ottoman Empire, the population being required for practical reasons to convert to Islam.

And, so, the Turks built a mosque inside the Fortress of Fortezza. 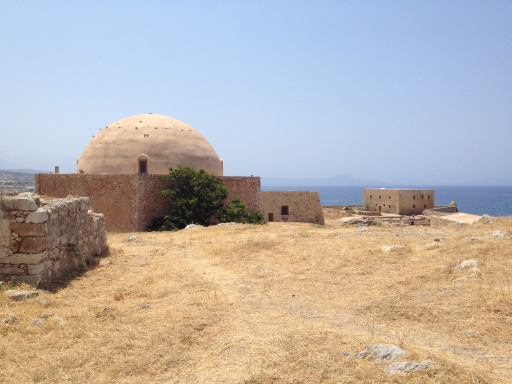 It was an interesting place to visit; very scenic: 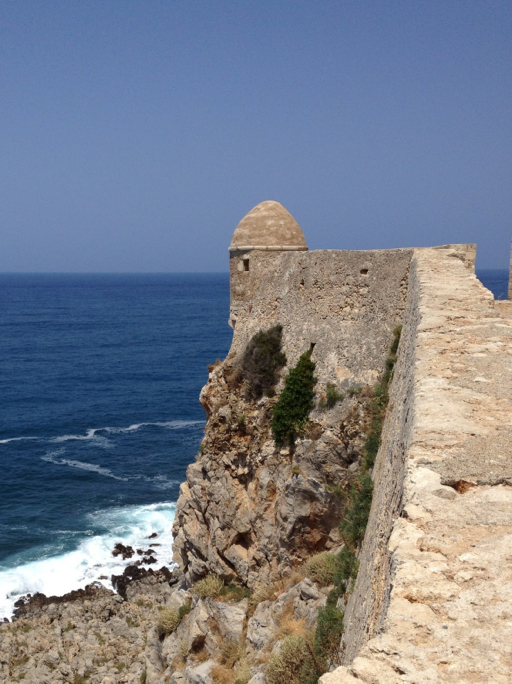 But we never did figure out why this national site was open when Knossos, the national site we really wanted to visit, was closed “for the election.”

At any rate, we returned to our own Fortezza, the Hotel version, for a swim and a little lounging around.

Tomorrow, we’ll find out how the election went and whether our Euros are worth anything here anymore. 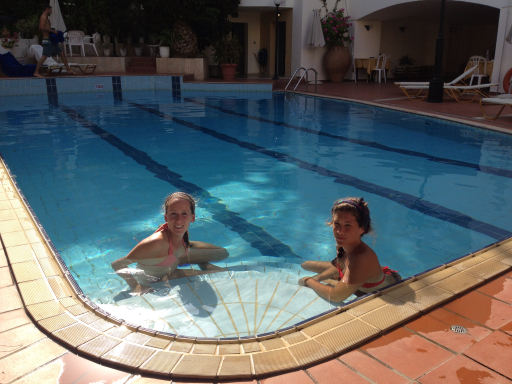 There’s more than one way to conquer Greece and the current method doesn’t require an army or a navy, just let the Greeks destroy themselves by electing knaves and fools; they’ve been pretty good at it so far.