This morning, we drove up the windward coast of Oahu. About a third of the way to the far north end, we stopped at the Byodo-In Temple, a Japanese Buddhist temple built in 1968 to commemorate the first Japanese immigrants to Hawaii. It was just like being in Japan. 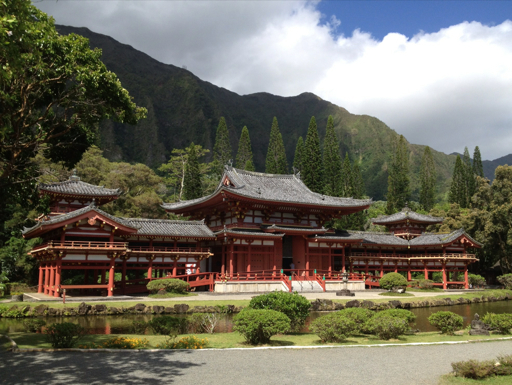 The entire temple was built without nails and is a replica of a 900-year old temple in Uji, Japan.

When first entering the grounds, it’s customary to strike the 3-ton bell that sits in a pagoda just outside the temple.

Oops…you’re supposed to ring it gently. My bad.

We walked around the grounds. As you might imagine, the temple is popular with Japanese tourists. Dale enjoyed watching these two Japanese girls feed sparrows out of the palms of their hands, but I was more interested in the Koi pond.

The temple is encircled by a rock garden and Koi filled moat that had a couple black swans swimming in it.

Dale bumped into an old friend – a fellow bodhisattva – but couldn’t remember her name.

Inside the temple was an 18-foot tall buddha statue, painted in gold leaf.

The visit got us thinking about our next big trip. Hmmm…maybe the Far East. 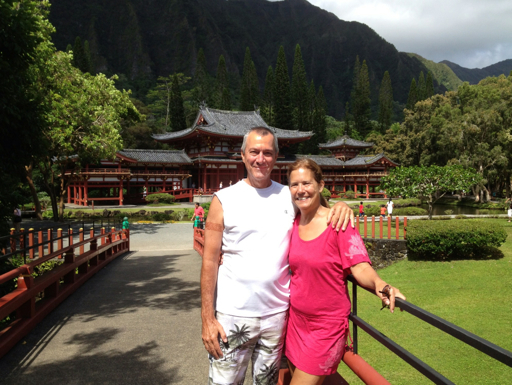 A little further up the road, after leaving Byodo-In Temple, we passed a small offshore island, fittingly called “Chinese Hat;” that’s it on the right.