On Monday, we drove to the eastern shore of Cape Breton Island to visit the Fortress at Louisbourg, a National Historic Site of Canada. The town and fortress at Louisbourg were both destroyed in the mid-1700s, but the Canadian government located the plans to the fort and most of the important buildings in the archives in France and Quebec and recreated the fort and rebuilt one-quarter of the town as it existed in the 1740s.

Today, the town is a living history museum, staffed with well-informed docents in costume, similar to the recreated colonial town in Williamsburg, Virginia.

Arriving at the Visitor’s Center in the late afternoon, we took a bus down to the outskirts of the town where we were dropped off for the walk into the fortified town.

We passed through the gates and walked along one of the batteries that protected the harbor.

The French were granted rights to Nova Scotia in the Treaty of Utrecht in 1713 which ended the War of Spanish Succession, a war in which France and England took opposite sides.

The area was quickly inhabited by French fishermen in the early 1700s and King Louis XIV then began construction of a fort to protect the inhabitants and the Gulf of St. Lawrence (and the other French possessions up the St. Lawrence River). Construction of the fort took 28 years, with nearly all of the defenses facing the harbor and the ocean, leaving the marshy landward side of the fortress relatively undefended.

We walked through the town which, on this September afternoon, was almost entirely populated with French-speaking Canadians. 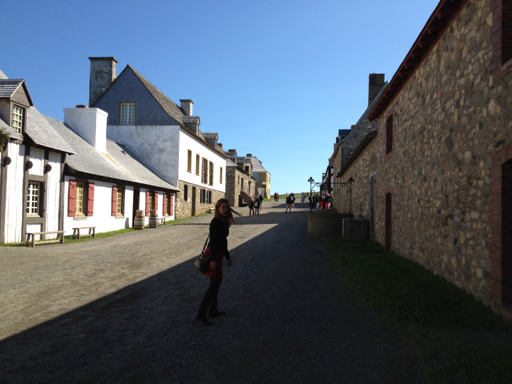 Above the town sat the Governor’s quarters and the military barracks.

After hiking up to the fortress, we walked along the walls, looking inward at the barracks and parade grounds. 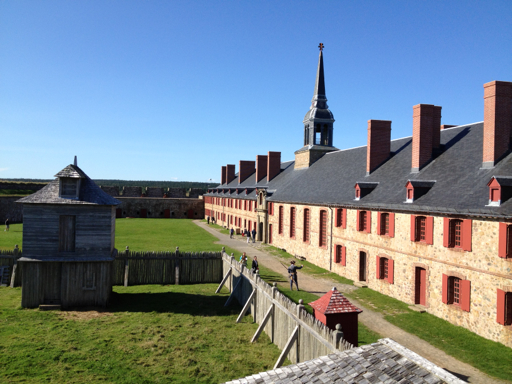 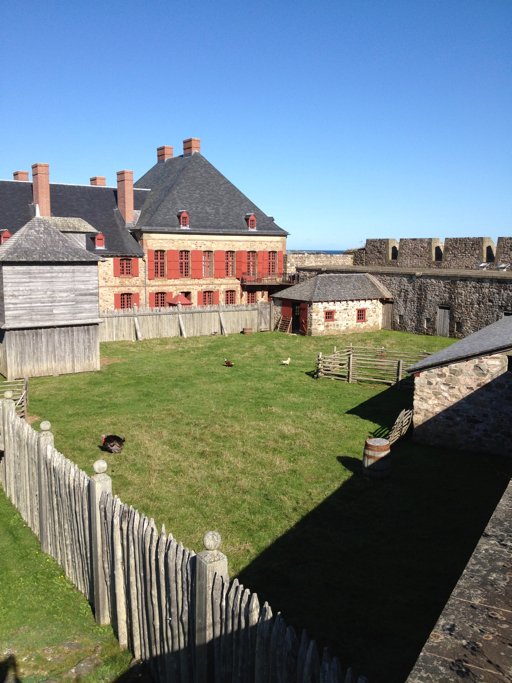 Then, we looked back on the town from the fortress walls.

In 1745, the French and English were again at war, this time in the War of Austrian Succession, also known as King George’s War. The English laid siege to the fortress from the undefended landward side and captured the town, which England held for only a few years, returning it to the French in 1748 through the Treaty of Aix-la-Chapelle.

The English were also fighting the Scots in 1745, defeating their “Jacobite Rebellion” in the Scottish Highlands once-and-for-all at the Battle of Culloden in 1746. After the battle, the English hunted down and either killed or imprisoned all the Scots Highland soldiers they could find. In time, the English decided to deport these Scottish warrior-prisoners to the colonies, rather than continue to maintain so much of the population in prison. And so they did, shipping all the Scots Highlanders that would pledge to never again take up arms against the King of England off to North Carolina and. . . you guessed it. . . Nova Scotia.

Meanwhile, back in Louisbourg, the French rebuilt their town and fortress while the British retreated south to modern-day Halifax, the current capital of Nova Scotia, where the British built their own fort and city….

Until 1758 when the British once again laid siege to Louisbourg at the beginning of the French & Indian War, known in Europe as the Seven Years War. This time, however, after the British captured the town, they completely destroyed the fortress and deported all the French soldiers, fishermen and citizens, then they used the harbor as their staging area to battle their way further down the St. Lawrence to take Canada away from the French. The 1763 Treaty of Paris, which ended the French & Indian War, gave Canada to England.

As our day was ending, the last French soldier at the fortress explained to us the mechanics of firing a cannon.

So, Louisbourg became Louisburg, a Scottish community under English rule (I noticed that all the native Anglophiles I talked to about the place called it Lewisburg; whereas, the native Francophiles all called it Louiebairg).

But some of the Frenchmen later returned. And, as I mentioned in an earlier post, the Maritime Provinces of Canada are an ethnic mixture of French, Scottish, Irish and English, each holding onto its own heritage while mixing with its neighbors.