Ever since landing in Argentina, we have wanted to taste one of those famous steaks, cooked at a parrilla, an Argentinian BBQ restaurant. After spending about an hour researching the internet and asking for a recommendation from people in the hotel, we opted to just walk across the street to Restaurante Las Nazarenas Asador Criollo, which nobody had recommended. It turned out to be a fantastic native grill.

Some of the meats they served were cooked on spits over a charcoal fire inside the restaurant, including, I believe, the churrasco steak I ordered:

Dale ordered a “lomo” which we’re pretty sure was a gigantic filet mignon; hers was probably cooked on the grill behind our gaucho chef, chopping away in this photo: 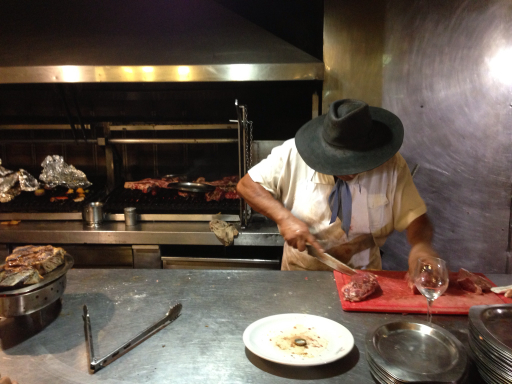 It was one of the best steak dinners we’ve ever had. Unfortunately, we enjoyed it a little too much, feeling stuffed all day today, which we spent traveling to Iguazu.

Our flight on this Valentine’s Day was delayed until the afternoon, so we had to juggle our schedule around in order to make up for the time we lost waiting for our plane. We had planned to visit the Brazil side of the Iguazu falls this afternoon, but we arrived too late, so we changed our next flight and booked an extra hotel night in Iguazu, so that we can go to Brazil tomorrow – after all, it took us three trips to Miami and $320 in fees to get our Brazilian visas!

We landed in Iguazu and checked into our hotel, another Sheraton, just as the sun was about to go down. But there was still time for a Valentine’s Day kiss with the Iguazu falls as a backdrop.

3 thoughts on “Be Mine, Valentine”