Although Monte Fitz Roy is visible from nearly everywhere around El Chaltén due to its height, it’s quite a challenge to actually get to the base of the mountain.

Here’s Dale near the start of our hike as we left Pilar, with Monte Fitz Roy off far in the distance, about 7 miles away:

…with magnificent views of Fitz Roy across the valley. 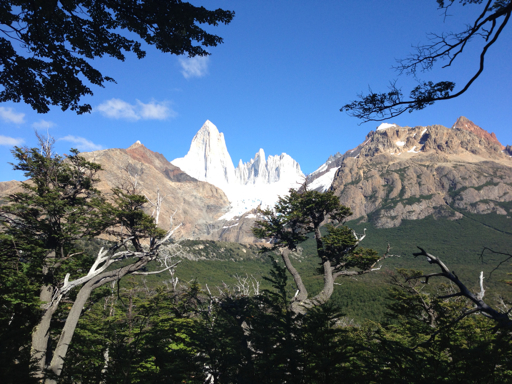 We chose the trail in from Pilar in part because it passes Laguna Piedras Blancas and its attendant glacier, whereas the other route (from looking at the topo map) seemed to have less spectacular vistas.

The forested part of the hike lasted about two hours and though it was a bright, sunny day, we walked in shade much of the way, admiring the changing vegetation. 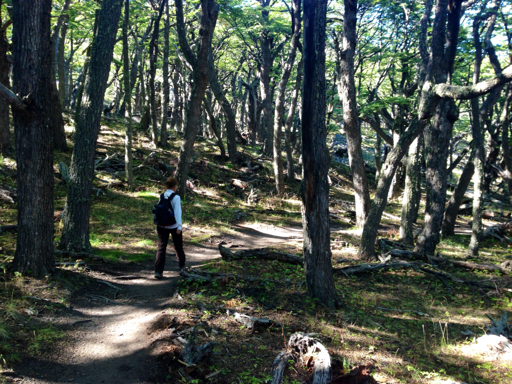 We emerged from the forest, much closer now to Monte Fitz Roy, where we could see the steep final mile up to the base of the mountain. If you look closely, you can see the trail traversing back and forth up the incline just above the trees in this photo: 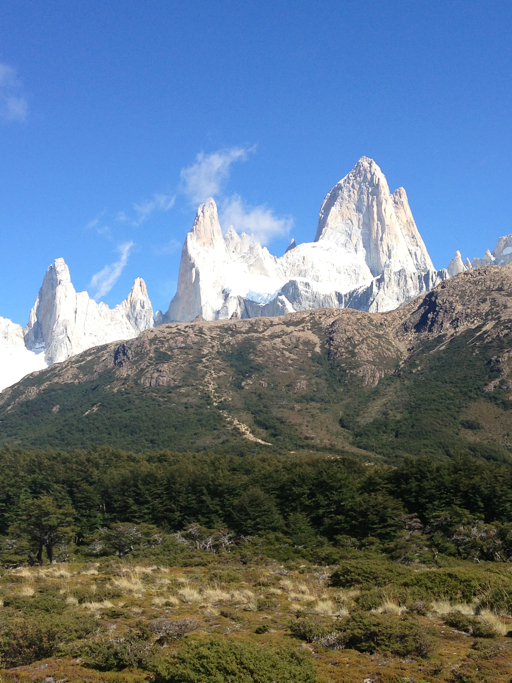 Passing through a small prairie, the trail then descended through that last small wooded area before coming to the river flowing down from Fitz Roy which we we crossed on a log foot bridge.

Across the river, we were able to see the big challenge ahead: a very steep, one hour ascent gaining 2,300 feet over one mile, nearly a 45° grade, that we had been told by other hikers “you must do, even if you have to crawl at the end.”

Finally topping the ridge you see in the photo, above, there was a small plateau and then another ridge, shown in the photo, below. It was a very strenuous climb and though we didn’t have to crawl, we did need to frequently stop and rest toward the end. 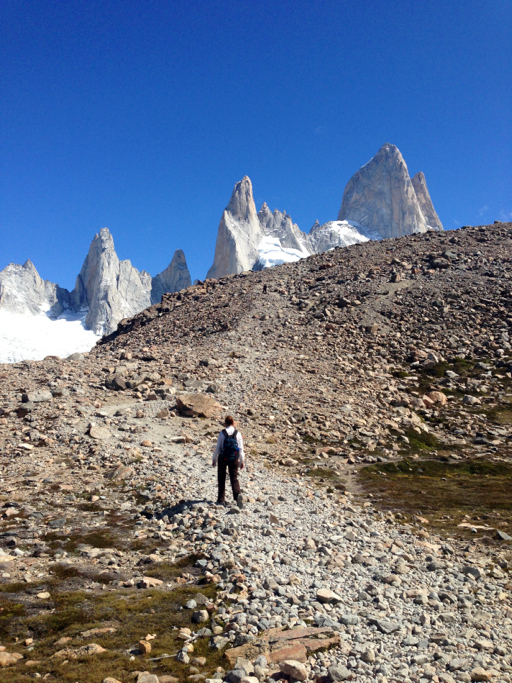 Finally reaching the top, we understood why everyone says that you must climb to Laguna de los Tres at the base of Monte Fitz Roy. Here’s the view at the end of the ascent.

We decided to hike down to the lake from the overlook…

to refill our water bottles with meltwater from the glacier,…

…then we made our way around the lake to the left where Laguna de los Tres overflows down into another lake, Laguna Sucia.

After collecting a few small fragments of granite as souvenirs, we hiked back up from the lakes to the overlook,…

…then looked back down toward town, our destination 8 miles distant.

At least it would be all downhill from here.