The Gironde is the estuary connecting the Bay of Biscay with the Garonne and Dordogne rivers. The Gironde and the Garonne are Bordeaux’s lifeline to the Atlantic Ocean, without which the city would not have developed into the magnificent wine-exporting port it became.

When the National Assembly established the modern administrative structure of the new French nation-state in 1790 at the beginning of the French Revolution with the creation of 83 districts called Departments, it named this Department, the Gironde.

The French Revolution followed quickly on the heals of the American Revolution which, to some extent, was its catalyst for at least two reasons: providing military assistance to the colonists had nearly bankrupted the French monarchy; and, the French people, still living under feudalism, could not help but be inspired by the success of the Americans in creating their new, egalitarian self-governing nation.

So, when, in an attempt to raise taxes, French King Louis XVI called a new “Estates General,” an assembly of the three estates: the nobility, the clergy and the commoners, things quickly spun out of control for him. The “Third Estate,” the commoners, rejected the King’s authority and the old system, the “Ancien Régime,” assumed sovereignty for themselves as the representative government of the people, and abolished feudalism.

Two “parties” arose in the new National Convention, the Girondins – a group of lawyers, politicians and merchants from the Gironde department – and the Montagnards, a more revolutionary faction, backed by the “sans-cullots,” the commoners and mobs of Paris.

As the situation became more frenzied, the Montagnards, led by Maximilian Robespierre, accused their less radical political opponents, the Girondins, of being traitors to the Revolution when they opposed the execution of the King, so the Montagnards added them to the list and had 21 of the Girondins deputies arrested and guillotined in a mass execution. This was the beginning of the “Reign of Terror.”

Nearly a century later, the city fathers of Bordeaux decided to erect a monument to the Girondins martyrs. It is the focal point of the immense public plaza known as the Place des Quinconces.

Here’s a view of the Place des Quinconces from the base of the Monument des Girondins. The columns in the distance are topped with statutes of two famous Bordeaux citizens, Montaigne and Montesquieu. 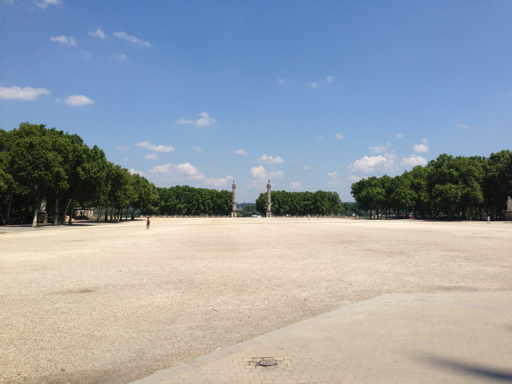 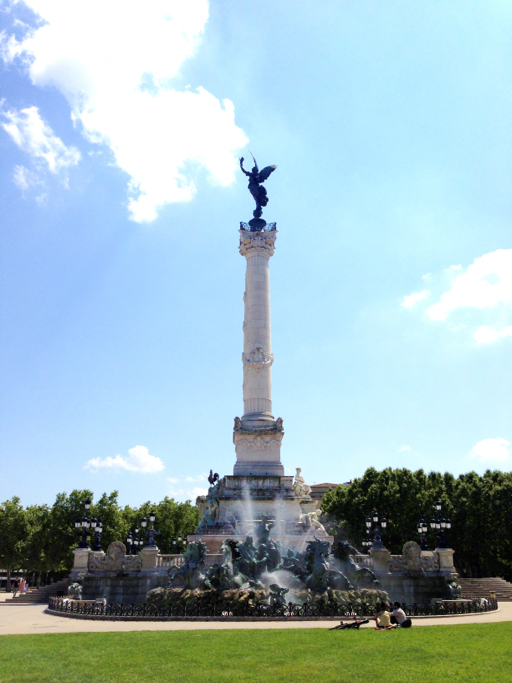 …with a statue of Liberty breaking her chains at the top. 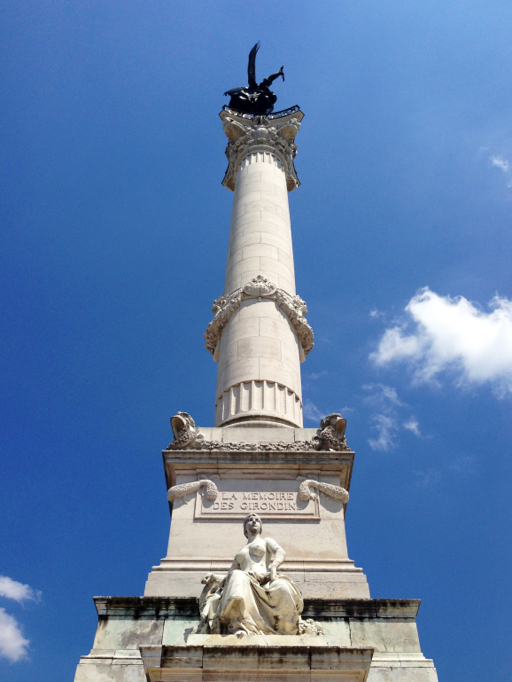 The fountains around the base of the monument were amazing, although I don’t have the slightest idea what they are intended to symbolize.

This one, facing the Grand Théâtre, is called the Triumph of the Republic: 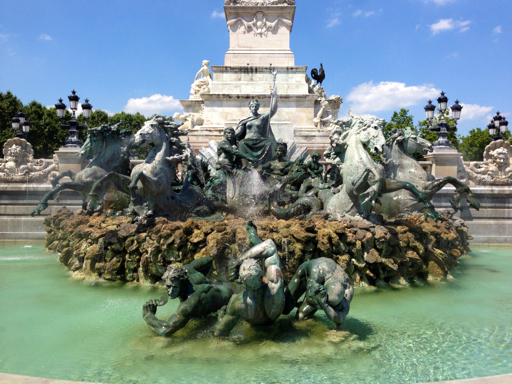 The one on the opposite side is called the Triumph of the Concorde, whatever that is (one definition is “union”).

Whatever. We loved the horses with webbed feet, snorting streams of water. 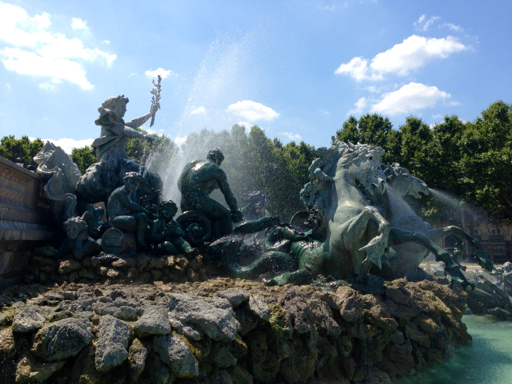