The French National Day, “Bastille Day” to English-speakers, is celebrated on July 14th in much the same way as we celebrate our own Independence Day in the USA on July 4th – with parades and fireworks.

The biggest Bastille Day celebration is in Paris (we were there as a family several years ago on Bastille Day and saw what seemed like the entire French Air Force fly over the Louvre). But most of the larger cities also have some type of holiday program and the celebration here in Bordeaux was going to be on the Place des Quinconces, the plaza with the Girondins monument and fountain. [By the way, Nico just sent me an email explaining the symbolism of the Girondins fountain: the horses and their drivers are the virtues of the French Revolution and they are chasing away the evils of the Ancién Regime.]

The official program called for the recognition of the military forces at 7:30 and a military parade at 8:20, to be followed by fireworks along the riverfront at 10:45 p.m.

We started walking over to the Quinconces plaza around 7:00. It was very eerie; there were no people on the street anywhere for nearly the entire 20 minute walk. 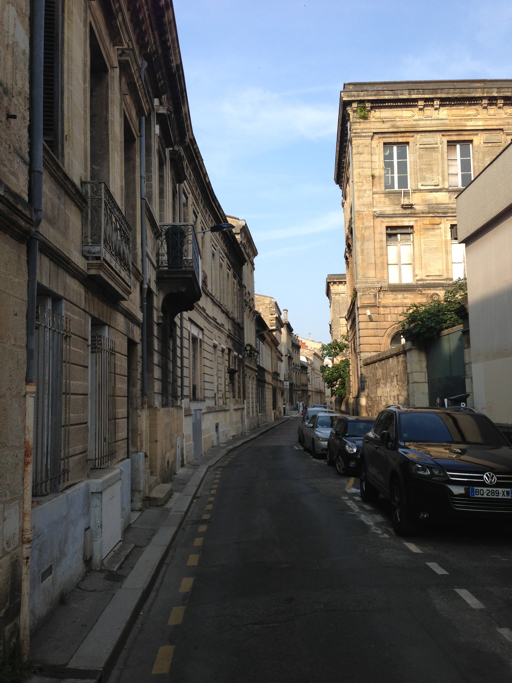 Even the Allées de Tourny was abandoned (Trevor would have thought World War Z had started)! 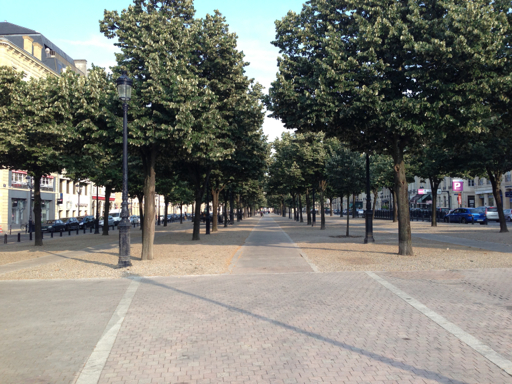 We soon found everyone, though; already assembled for the recognition of the troops at the Quinconces plaza.

I mentioned that the French celebrate July 14th as their National Day, that is, their Independence Day. The first time this holiday was celebrated was in 1880 and it seems that there was some debate over the significance of July 14th as the date for the celebration.

On July 14, 1789, at the beginning of the French Revolution, Parisian partisans stormed the Bastille, a fortress-prison that was believed by the citizenry to also be an armory – they were after the gunpowder and weapons they thought were housed there. The partisans’ victory over the minimal Royalist forces holding the Bastille was later viewed as a turning point in the overthrow of the monarchy.

But, things settled down somewhat after the storming of the Bastille and the new National Convention legislated away feudalism and enacted the Declaration of the Rights of Man. The people believed that the French Revolution had reached a happy conclusion with the peaceful transfer of power from the monarchy to the National Assembly, leaving only a weakened, but constitutional, monarchy in place. So, on July 14, 1790, a great feast known as the Fête de la Fédération took place to celebrate.

Not long afterwards, however, it was discovered that King Louis XVI had been carrying on secret communications with the monarchs of neighboring countries seeking military support for a counter-revolution and the king ultimately lost his head over the whole affair – literally.

Followed by what looked to us as representatives of the French Foreign Legion. It looked like every branch of the military, as well as the local gendarmes and fire brigades, were in the parade.

After the parade, we walked along the quay (known along this part of the Garonne River as Quai Louis XVIII)… 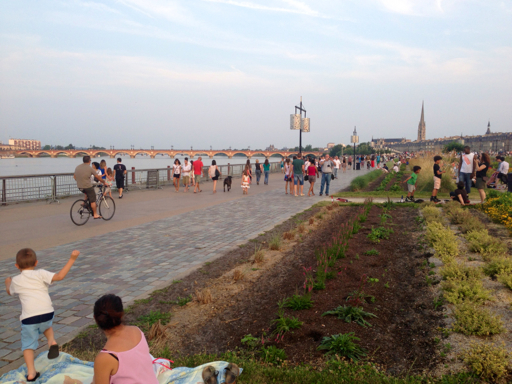 …down toward the Place de la Bourse where the crowds were already starting to gather for the fireworks.

The Place de la Bourse is the location of the old stock exchange. Behind all these hopeful fireworks spectators is a huge reflecting pool that the anxious kids in the crowd were cooling off in as their parents waited. 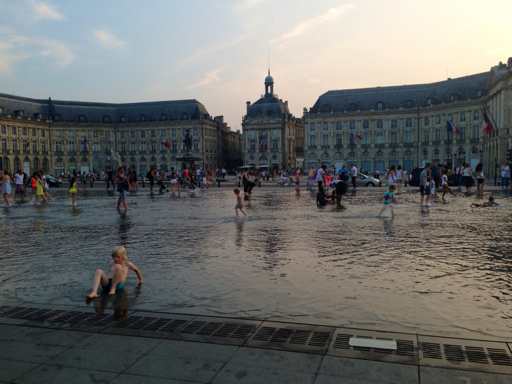 We walked back down toward the Place de Quinconces where it seemed more of the crowd had settled in for the show.

Then we realized that it was only 9:30 and there was still over an hour before the fireworks would begin – IF they started on time, which everybody knows they never do.

The sun was setting over the Place de Quinconces and the politicians, soldiers and marching bands had all dispersed. We took that as our cue to leave, too.

I’m sure it was an amazing show, but we had an early day ahead of us on Monday, so we headed home where we were lulled to sleep by the distant percussion of the fireworks display, the bombs bursting in air.