One thing we wanted to make sure to see before leaving Bordeaux was the nearby medieval village of Saint-Émilion, located in the center of a famous wine region of the Gironde.

Supposedly, the village is named after a hermit from Brittany known as Émilion – some say he was a monk – that arrived and lived in a cave here in the 8th century A.D. At any rate, he was never canonized by the Catholic Church, so he was not really a saint (if you believe in that stuff). The local people, however, attributed miracles to him, such as healing a woman’s blindness, so they declared him their saint, Saint-Émilion.

In the 12th and 13th centuries A.D., the town that had grown up in this wine-growing region (the Romans were the first to grow grapes here), which in those days was as populous as Bordeaux, was fortified as a gated and walled city. There was even a moat, put to use these days as a vineyard that partially encircles the town; here’s a picture of it: 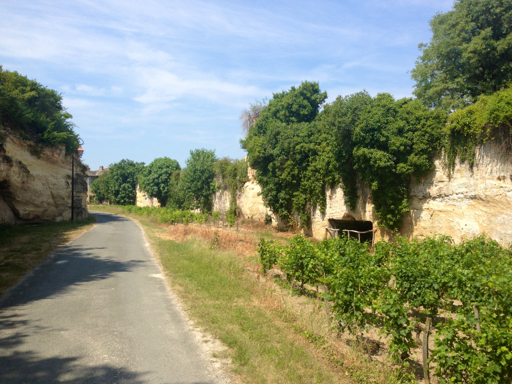 In more recent times, the vintners have carved caves into the sides of the old moat (you can see one on the right in the photo, above) that they now use as wine storage warehouses because the caves are 55°F, year round.

Most of Saint-Émilion is limited to foot traffic and most of the parking is outside the city walls. As we walked into town from where we parked, we could see the 3 main religious structures of the “upper” town; from left to right they are: the collegiate church and its cloisters (on the far left); the bell tower of the monolithic church; and, the cordeliers cloister (on the far right).

We walked over to the bell tower of the monolithic church; it’s the tall steeple in the picture, above. From here, we could look back to the King’s Tower, a castle keep built in the 13th century A.D. (the photo, above, was taken from the base of the King’s Tower).

From the plaza surrounding the bell tower, we could look down into the marketplace of the “lower” town. The big tree you see is a “liberty tree,” planted at the time of the French Revolution in the 1790s (actually, the original liberty tree died and this one was planted to replace it).

In medieval days, the upper town was where all the religious orders lived and worshiped and the lower town was for the local populace. Back then, the only way to get up and down between the upper and lower towns was to walk the “tertres,” the steep cobblestone streets. We walked down into the marketplace on the Tertre de la Tente.

The cobblestones of each tertre are atypically large, purportedly because they were actually ballast stones left in Saint-Émilion by English merchants and reused by the townspeople. The wine casks being exported back to England took the place of the ballast stones in the merchants’ ships’ holds.

After walking through the marketplace (to which we later returned for lunch), we walked up another steep tertre, the Tertre de la Cadéne, to the Rue de la Porte Brunet. 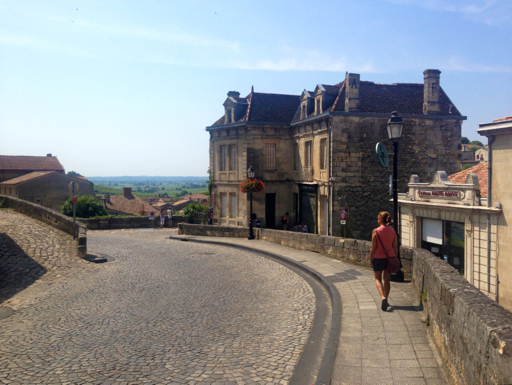 Along the way, we got a glimpse of the surrounding vineyards.

We continued east along the Rue de la Porte Brunet to the Brunet gate, which, like the walls, was built in the 12th century. We passed through this easternmost city gate, then turned and took this picture of it… 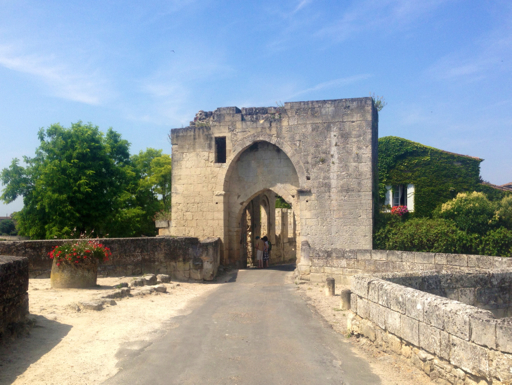 …before walking back inside the town and west back along Rue de la Porte Brunet to the cordeliers cloister, a Franciscan monastery built in the 14th century A.D.

Besides the cloisters (now used as a terrace café), the Franciscans also had a church here. This is what’s left of it.

Having oriented ourselves to the town, we returned to the tourist office to take a tour of the most famous site in Saint-Émilion, the monolithic church, the Église Monolithe.