The Musée de l’Orangerie is one of the few museums in Paris that’s open on Mondays and since it has a collection of Impressionist (and Post-Impressionist) paintings, we decided to start the day there.

L’Orangerie began life in the 1850s as a large greenhouse. It is located in the southwest corner of the Tuileries Garden, a fabulous public park of 63 acres bounded by the Seine River on its south, the Louvre on its east and Concorde Plaza on its west.

We arrived just after noon and spent the rest of the day walking the Right Bank of the River Seine. Here’s a preview of our walk:

After exiting the Concorde Metro station, we walked around the west end of Tuileries Gardens before heading over to the Orangerie, which you can see on the other side of the pond.

There were several beautiful statutes scattered around Tuileries Garden, as well as a number of Parisians out enjoying the sunny day around the pond. 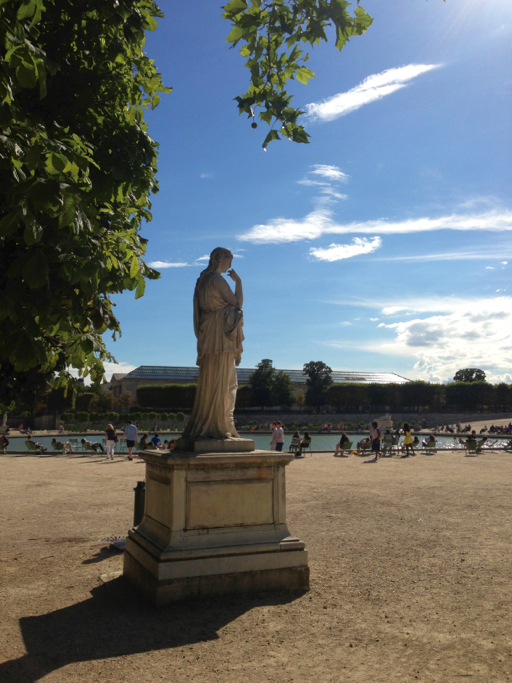 The Musée l’Orangerie is most famous for its display of Claude Monet’s Water Lilies murals, housed in two large oval-shaped rooms built specifically for that purpose and lit by natural sunlight from skylights in the roof.

Monet donated these huge paintings to the French government as a Peace memorial to celebrate the end of WWI on the condition that the building be modified so that the murals would be displayed in accordance with his wishes. The government lived up to its end of the bargain, but Monet then refused to part with the paintings, claiming they were not finished, and they remained in his possession until his death in 1926, at which time they were promptly moved into the Orangerie and put on public display. No photography was allowed in the oval rooms, so I don’t have any pictures of the murals to show you.

The Water Lilies murals are interesting and the changing light through the skylights makes the paintings almost seem to evolve as you look at them, but Monet is not my favorite Impressionist painter (his mentor, Edouard Manet is) and we weren’t really all that impressed with the exhibition.

We took a guided tour of the murals rooms, but opted to visit the rest of the collection by ourselves, and we enjoyed it more than the murals. The collection included paintings by Renoir, Cézanne, Modigliani, Matisse, Picasso, Rousseau and Sisley; there was also one Gauguin (which made a good segue from visiting the French Polynesia artifacts at the Musée du Quai Branly the day before), this one:

Leaving the Musée l’Orangerie, we walked through the Place du Concorde, the centerpiece of which is the 3,300-year-old Obelisk of Luxor (from the Luxor Temple in Egypt). This 75-tall pillar (on the right in the photo, below) was erected in the exact spot where the guillotine stood that was used to execute King Louis XVI and his wife, Marie Antoinette, during the French Revolution. 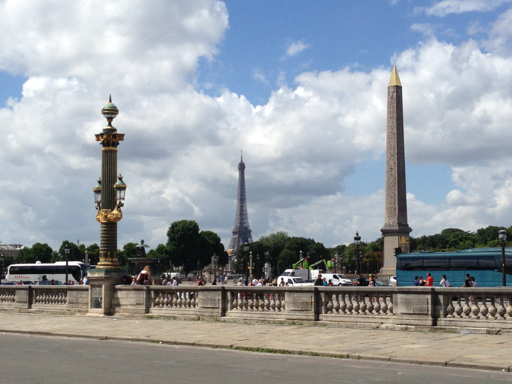 There are also two fountains in the Concorde Plaza; this one is a monument to Rivers; the other memorializes the Seas:

From here, we walked down the street that separates the two hotel buildings you see in the background in the picture, above, to the Église de la Madeleine.

It felt like we were back at the Parthenon in Athens! 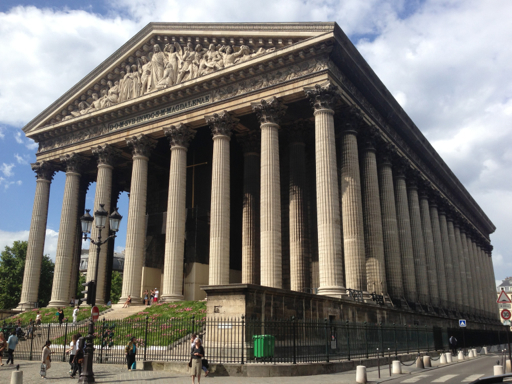 The structure was massive; look at the diameter of the columns:

And the façade was very imposing. 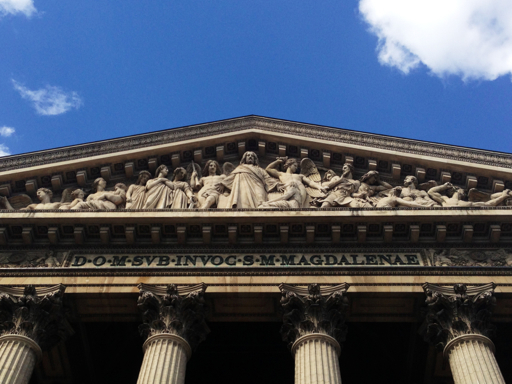 Construction of the current structure was started under Napoleon Bonaparte and the building was intended to serve as a temple to the honor of Napoleon’s army, but after the fall of Napoleon and the restoration of the monarchy, King Louis XVIII decided to convert the temple into a Catholic church dedicated to Mary Magdelene.

And, so, today it is a church. We were lucky; there was a concert going on inside. We sat and listened. 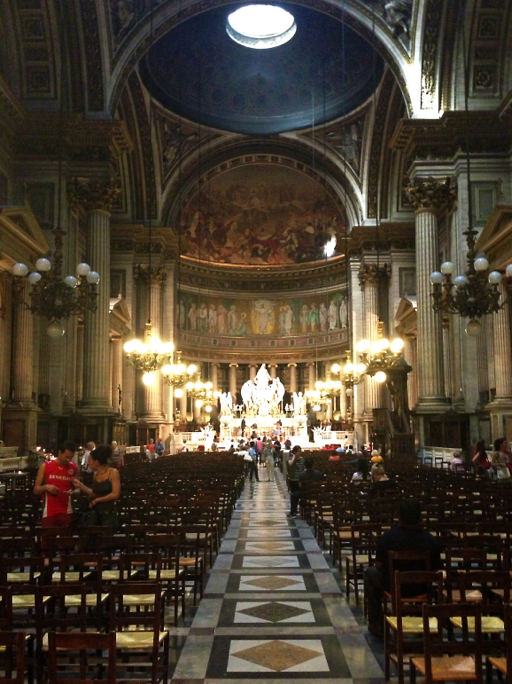 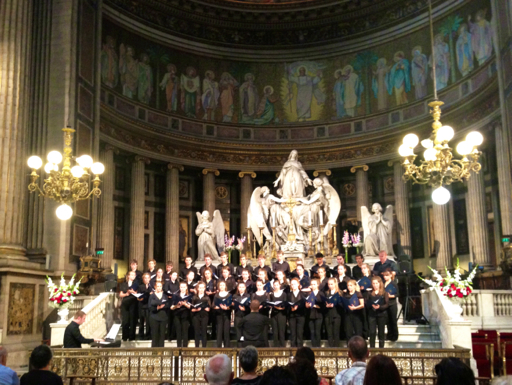 Retracing our steps back to Tuileries Garden, we walked down the main promenade,…

…stopping for a late lunch (Croque Monsieur – it’s like a grilled cheese) at one of the open-air cafes, before continuing to the Louvre end of the Garden, which I’ll show you in the next post.