Leaving Ulm, we traced the Blau River ten miles west to its headwaters: the spring at Blaubeuren known as the Blautopf (the “Blue Pot”). Blaubeuren is also home to an ancient Benedictine monastic village, obviously located here for the spring water and mill power it provides.

Blautopf is the second largest spring in Germany and, I suspect, the prettiest blue hue. The spring is about 70 feet deep and leads to a mile-long labyrinth of submerged, limestone caves that have only recently been explored. I'm sure our son, Kyle, an avid cave-diver, would be mesmerized by this place.

The magnificent coloration is supposedly the result of the chemical properties of the limestone. Here's a view looking across the spring at the still-operating hammer mill on its opposite shore. 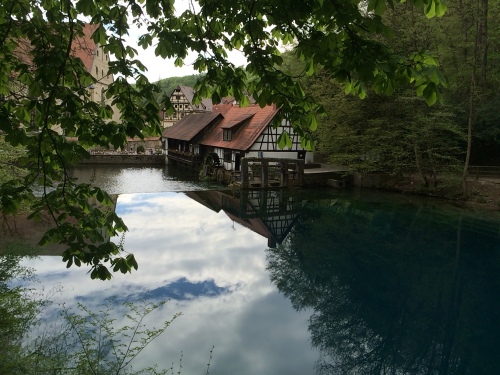 While at Blaubeuren, we walked around the abbey. Many of the buildings, like the one below, were built in the 1400s…

… which is apparent from the use of wooden pegs instead of nails.

We had coffee and ice cream, but didn't linger because we had one more stop to make before returning to Schönaich for a family dinner at Manfred's house.

About 2/3 of the way back to Schönaich, we drove up to the top of a peak on the edge of the Swabian Alps to visit the ruins of Hohenneuffen Castle. A castle was first built on this prominent, 2,500-foot-high peak sometime in the 11th or 12th century.

The original castle was expanded in the early 1500s and used as a prison in the later years of that century. In 1635, during the Thirty Years War, the castle was besieged by Imperial troops, surrendered, and was abandoned by its garrison. By 1800, the castle had fallen into such a state of disrepair that it was partially torn down by the surrounding villagers and used for building materials. In recent years, the castle has been partially restored and is now used for weddings and special events.

Passing through the castle gate… 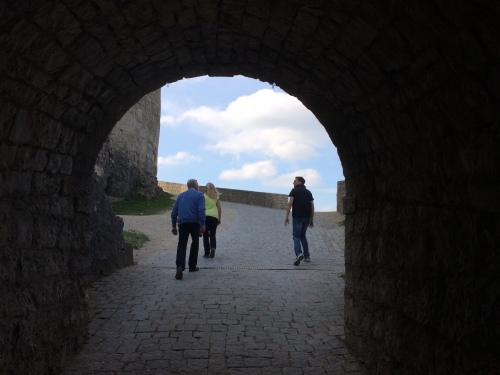 … we were greeted by the castle's guard-goat which Manfred tried to bribe. This guy wasn't interested in Manfred's offer – or in us – so we slipped on into the castle.

Continuing upward, we were treated first to a fine view of the village of Beuren to the north under the bright, blue sky…

… and then Neuffen to the west.

Here's another view of Neuffen, this time from the top of the castle.

And here's Beuren again in the distance with the Baden-Württemberg state flag flying high above.

We were lucky to have had such a beautiful day for our trip with Manfred and Henrik. The 360° view from Hohenneuffen Castle was stunning!

Thank you, Manfred and Henrik, for a wonderful day.