I have to say that I really love the beer, pretzel bread and wurst here but my favorite Swabian food is Spätzle, a boiled dough that looks and tastes a little bit like spaghetti. Dale asked Heike to show her how to make it, so when we got back to the house, Heike and Dale got started making Spätzle for our final meal in Schönaich.

Generally, the ingredients are flour, eggs, water and salt which all get mix into a dough.

But the real art of making Spätzle is cutting or slicing it into strips like Heike is doing in this photo:

The dough is boiled until it floats…

… then scooped out and rinsed in a collander.

There are all kinds of sauces that go on Spätzle, just like spaghetti, but I like mine with butter and salt.

After dinner, we went to bed early so we would be fresh in the morning for our all-day train trip to Vienna.

The main train station in Stuttgart, the Hauptbahnhof, is under construction as part of the Stuttgart 21 Project, a massive €7,000,000,000 multi-year project. Planned for completion in 2021, the project involves rebuilding the Stuttgart Hauptbahnhof as an underground station with the rails turned perpendicular to their current layout in order to pass through the city, rather than dead-end as they currently do, coupled with constructing a new, high-speed rail between Stuttgart and Ulm, part of the ultimate Paris to Budapest rail. We saw the on-going construction of the new Stuttgart-Ulm link on our drive to Ulm with Manfred and Henrik.

Anyway, Heike and Dorothea took us to the train station Saturday morning and gave us a nice send-off.

As the train started to pull out of the station, Heike texted me this photo that she took of us just after I took the photo of her and Dorothea, above:

We purchased a 4-country, regional Eurail pass which I upgraded to First Class for just an extra $100 each. That allowed us to have a semi-private cabin on the train from Stuttgart to Salzburg… 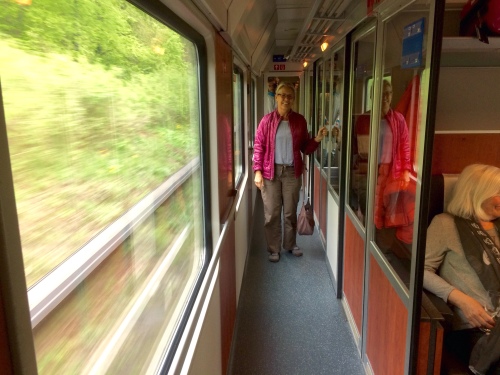 … that we shared with a chatty German couple for 2/3 of the way, then we had it to ourselves.

It was a nice, easy train ride with only one train change and we got to Vienna on schedule at 4:30 p.m. We were lucky to be traveling on the day we did because the German railroad workers went on strike (for the second time in less than 2 weeks) just a couple days after our arrival in Vienna.

So, we made it to Vienna without any problems. I'll tell you more about our home for the month of May starting with my next post.

[A note about the title: The Orange Blossom Special is a bluegrass song that relies on a fast-paced fiddle to mimic the sound of a train; the lyrics say that train is utlimately bound for Florida.]