The Hofburg Palace complex contains several museums, in addition to one of the two royal residences, the treasury and the Spanish riding school. It also is home to the Austrian National Library, the Österreichische Nationalbibliothek.

Around the back side of the National Library, and somewhat hard to find, is the Prunksaal (the State Hall) that Emperor Karl VI (b. 1685, ruled 1711-1740) had built in the baroque style in 1723-26 to house his personal library. We thought we’d stop in and flip throught the card catalog to see if there was anything worth checking out.

Dale was intrigued by the way the books – 200,000 of them – were arranged on the shelves: big, heavy tomes on the bottom, working up to tiny volumes on the top shelves.

The Prunksaal is not quite the length of a football field and is divided by these columns into two thematic rooms, art-wise: the war wing, foreground; and the peace wing in the distance. In the old days, the emperor would enter from the far door into the peace wing. 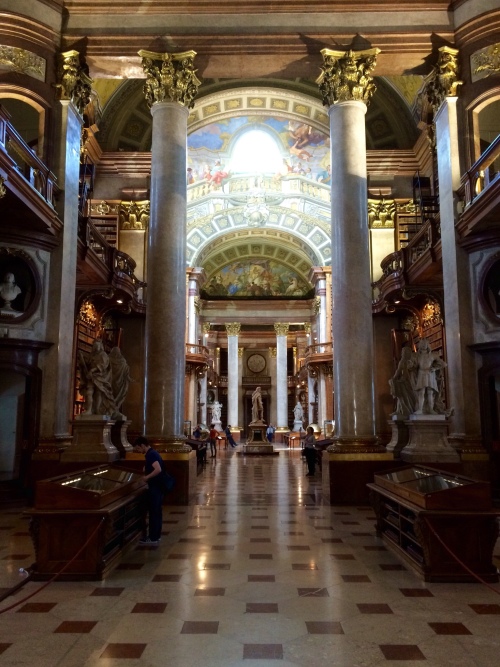 Emperor Karl VI is the guy on the pedestal in the photos above and below. He was the father of the more famous Empress Maria Theresia (b. 1717, ruled 1740-1780) who, in turn, was great-great-grandmother of Emperor Franz Joseph (b. 1830, ruled 1848-1916) who I mistakenly said in an earlier post was the last Habsburg emperor – he was next-to-last, his grand-nephew, Karl, was the last until his exile at the end of WWI.

The fresco, honoring Emperor Karl VI, on the top of the cupola is nearly 90 feet above the floor. It was really quite impressive. 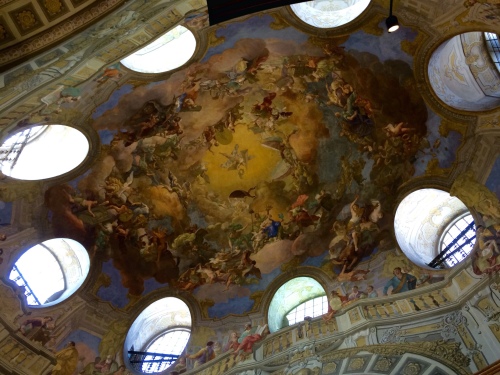 Inspired to read a little, we headed back to the apartment for a while, needing to rest up for a little wine and song this evening.