It was fascinating to learn about the rise and fall of the Roman Empire when we visited Turkey in 2012. Prior to that trip, I knew relatively little about Rome from the early years of Christianity on – and nearly nothing about the Byzantine Empire, that is, the Eastern Roman Empire that continued on until 1453 A.D. when its capital, Constantinople, now known as Istanbul, was overrun by the Ottoman Turks.

The Western Empire continued to be ruled from Rome until it eventually succumbed to the “barbarians” and by 476 A.D. there was no longer a Roman Empire nor a Roman Emperor. Thereafter, western europe deteriorated into small fiefdoms and the Roman infrastucture of roads, aqueducts, towns and defensive barriers fell into decay.

After several centuries of these Dark Ages, Charlemagne, king of the Franks, set out to unite the fractured continent and found it expedient to restore ties with the Christian Church in Rome and resurrect the old Roman Empire in the person of himself as the new Holy Roman Emperor, effective Christmas Day, 800 A.D.

From 1452, the Habsburg family sat on Charlemagne’s throne, and in 1569 the fifth Habsburg Holy Roman Emperor, Maximilian II, acquired a huge wooded estate on the outskirts of what is modern-day Vienna which he had fenced and stocked with game to serve as the royal hunting grounds.

Sometime thereafter, a Schön Brunnen – German for “beautiful spring” – was found on the estate and in the early 1600s the Habsburgs built a hunting lodge on the property that they called, simply, “Schönbrunn.”

Not longer afterward, in 1683, the Ottoman Turks (remember them?) invaded and destroyed the Habsburg’s hunting lodge, but in the early 1700s Emperor Karl VI began construction of a palace in its place, though his heart wasn’t really in the project and he gave the property to his daughter, the future Empress, Maria Theresia, as a wedding present (Kelly, don’t get any ideas).

We spent half a day visiting the Schönbrunn Palace and its grounds, a UNESCO World Cultural Heritage Site, on Tuesday. Here’s the front façade:

Empress Maria Theresia (b. 1717, ruled 1740-1780) really got into designing and decorating mode, revising the plans, commissioning the decorator, and even picking out the paint color, a bright yellow, for the exterior.

The Empress’ husband, Franz Stephan, was happy to stay out of politics and house building, so Maria Theresia, heir to the throne, in addition to building the Palace and giving birth to 16 children (including none other than Marie Antoinette), ran the Empire.

Here are portraits of the Empress, her husband and part of her brood that we found in the Wien Museum Karlsplatz:

The Palace, which is supposedly the most-visited tourist attraction in Vienna and advertised as being a rival to Versailles, is, in a word, ostentatious. It has 1,440 rooms, 40 of which we toured, including these two:

I’m not sure, because it was so dizzying walking through all the gilt and lavishness, but I think this is the Great Gallery where the delegates of the Congress of Vienna met in 1815 to divide up Europe after the defeat of Napoleon (today it was under invasion by masses of Chinese tourists): 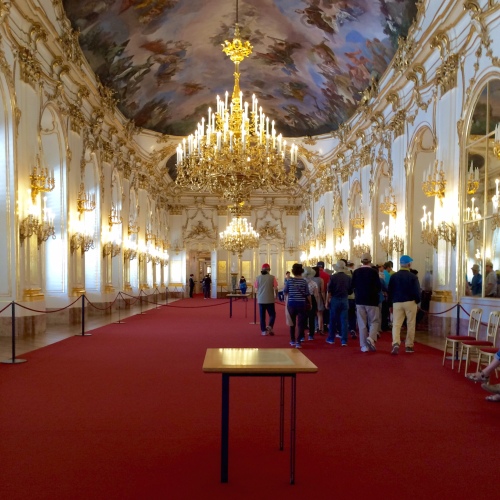 The Palace grounds are enormous. Making our way out back, we could see the Gloriette, an unusual, open-air structure, off in the distance. 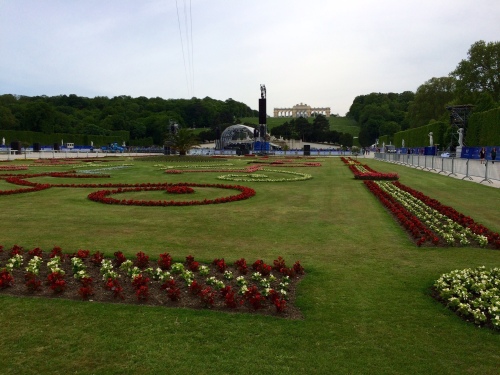 We walked uphill on a diagonal path, glancing back at the Palace,… 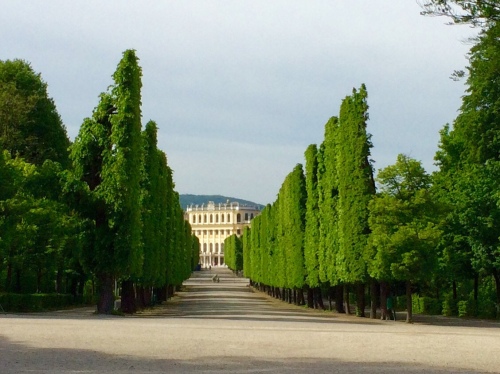 … to the “Roman Ruins,” which are neither Roman nor Ruins, having been constructed in 1778 as yet one more attempt to enhance the claim that the Habsburgs were legitimate heirs to the Emperors of Rome.

But I found the Obelisk Fountain to take things a little too far. Also constructed around 1778, this “Egyptian” monument was covered with hieroglyphs purporting to list the achievements and history of the Habsburgs. The only problem was: the first time hieroglyphs were deciphered was 50 years later in the 1820s, so whatever was written on the Obelisk was, at best, gibberish (though I read today that the museum curators now claim the symbols are some kind of Freemason code. Yeah, right; whatever sells tickets). 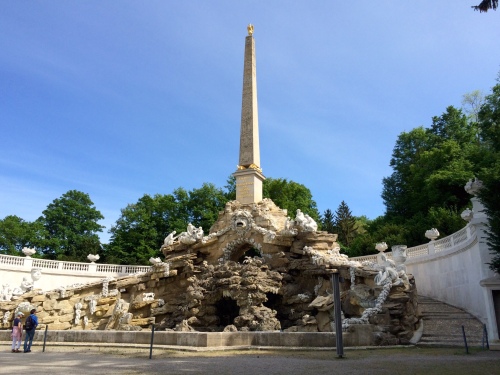 The most famous Habsburg Emperor in modern times, Franz Joseph (b. 1830, ruled 1848-1916), the one who threw down the gauntlet to Serbia in 1914, starting the First World War, was born and died in the Schönbrunn Palace. He liked to eat breakfast in the Gloriette. After WWI and the dissolution of the Habsburg Empire, Schönbrunn became the property of the new Austrian Republic.

Having reached the Gloriette, we stopped for a photo-op with the Schönbrunn Palace is the background.

The view of Vienna is really great from up here. That’s the St. Stephen’s Cathedral you see in the distance on the right, below.

It was a nice day to stroll around the house and gardens of the rich and famous, but, as awe-inspiring as the palace was, we thought this little part of the more-or-less natural world was mighty fine, too.

Perhaps these “Holy” Roman Emperors would have been well advised to have spent a little time with the Good Book.