A little over five miles upriver from Krems, we came to the medieval walled town of Dürnstein (established 1019 A.D.), just as the tourist riverboats from Vienna docked nearby. The main attraction inside the walls of Dünstein is the Augustiner-Chorherrenstift, a gothic monastery built for the Order of St. Augustine in 1410 and then rebuilt in the baroque style between 1710-1740.

We went inside the church and were startled to see complete skeletal relics in glass coffins, one on either side of the nave, probably some ancient abbot, but there was nothing we could find to tell us who they were. Just plain weird if you ask me.

The Augustinian monastery here was dissolved by order of Habsburg Emperor Joseph II in 1788, but has been kept well maintained over the years…

… and the tower has been repainted in its original blue – Danube Blue, I suppose.

About this time, the tourists from the riverboats invaded the town and one of them agreed to take a picture of us with the not-quite-so-blue Danube River in the background.

To escape the tourist invasion, we decided to hike up to the top of the nearby castle ruins known tosome as Kuenringerburg and as Burgruine Dürnstein to others.

The castle was destroyed by Swedish troops in 1645 near the end of the Thirty Years War.

It was really great to be outdoors on such a nice day and to get a little exercise climbing up to the castle. 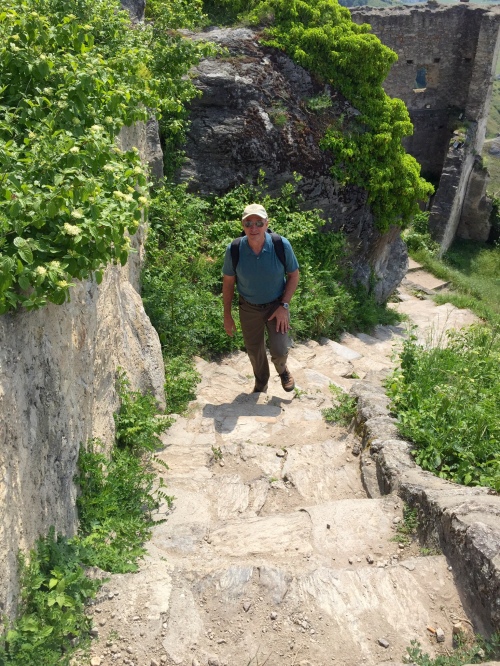 Here's the view from about halfway up:

The castle's claim to fame is that the English King known as Richard the Lionheart was held captive here for about three months in 1192 A.D. after being captured in Vienna by rivals on his return home to England from the Third Crusade.

From the top of the hill, the castle had a commanding view up and down the Danube.

The Battle of Dürnstein was fought in the flood plains around here during the Napoleonic Wars, but most likely it was on our side of the river. Those farmlands across the river are the only significant fields on that side between Krems and Melk, planted mainly with grape vines and apricot trees.

We stayed on top for about a half hour admiring the view and chatting with an Australian tourist from one of the riverboats. He did a great Sean Connery impersonation, about the last thing I expected to hear in the hinterlands of Austria.