The first new building completed on the Ringstraße was the opera house, built in 1861-1869. It was originally known as the Wiener Hofoper (the Vienna Court Opera), but after the fall of the Habsburgs in WWI, the name was changed to the Wiener Staatsoper (the Vienna State Opera).

Bombing during WW II destroyed most of the rear of the building, including the stage and much of the auditorium, but the façade and entry halls were unschathed. After considerable debate, the Austrian government decided to rebuild the structure to its original design rather than tear down what was left and the opera reopened in 1955. 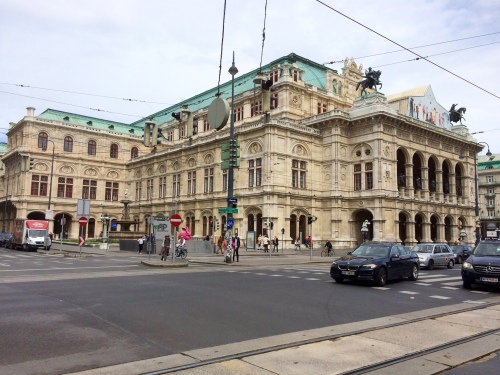 On Thursday we went to a performance of Rossini's “La Cenerentola” which is based on the Cinderella story, but without the fairy godmother and magic stuff.

Dale's not quite sure how it happened, but we ended up with front row box seats directly above the orchestra and stage! (Notice her sly look; I think there's something she's not telling me.)

Having ordered our tickets over the internet well in advance, we wanted to get to the opera house early to pick up our tickets at will-call. As you can see, we pretty much beat everyone to the performance, but it was fun watching the audience filter in, some in formal dress, others (mostly tourists, like us) in more casual attire. 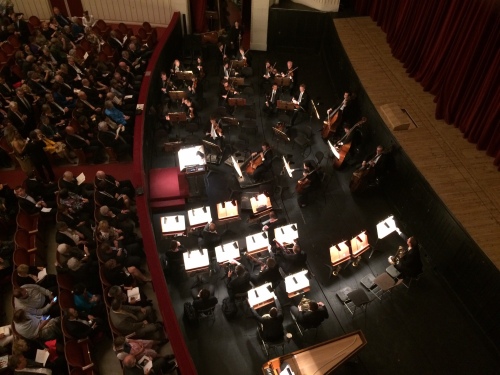 Rossini's more famous composition is “The Barber of Seville” (you know: Figaro, Figaro, Figaro) which he wrote in 1816 at the age of 24. A year later, over the span of 3 weeks, he wrote “La Cenerentola.”

The music was beautiful, the acoustics in the opera house were amazing, and it was a real treat to be seated so close to the orchestra and the stage.

This is only the second opera we've ever attended, the other being “Madame Butterfly” by Puccini at the Sydney Opera House in 2003. I think we need to do this a little more often.