On Monday, we walked over to see Váci Street (Váci utca) which is supposed to be the most beautiful shopping street in Budapest.

Not being an expert shopper, I can’t really say one way or the other if that claim holds water, but having handled my share of public works related cases, I can say that the manhole covers on Váci Street are second to none!

At the southern end of Váci Street, at the foot of the Liberty bridge, stands the enormous Great Market Hall (Központi Vásárcsarnok) where the shopkeepers will gladly relieve you of any money you have left after running the gauntlet of Váci Street. 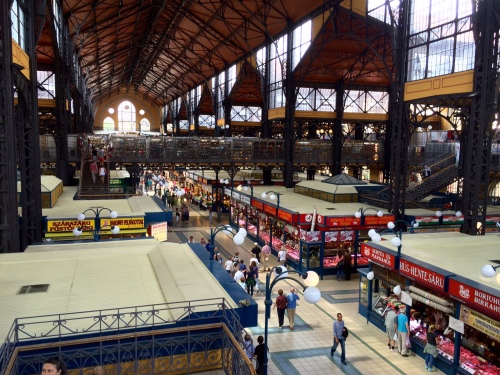 We had lunch on the upper deck, finishing with a local dish called a lángos which is like an elephant ear (fried dough) that you get at the carnival, smothered in Nutella. [I’m going to do a foodie post at the end of the trip and I’ll post a photo of one then.]

Also on Monday we walked over to the Parliament Building (Országház) for a tour; funny how we keep ending up in national capitals. Here’s Parliament from the southeast as we walked past.

The Parliament Building is the tallest (possibly tied with Saint Stephen’s Basilica) and largest building in Budapest.

According to our tour guide, the building was “inaugurated” in 1896 on the 1,000th anniversary of the creation of Hungary which the locals date to the coming of the Magyar tribes from the Eurasian Steppe in 896 A.D. I’m not quite sure what “inaugurated” means. According to Wikipedia, construction of the building started in 1885 and was completed in 1904. There is also considerable debate about when the Magyar tribes occupied the Hungarian Plains, so this 1,000th anniversary stuff is probably just a story to make the tour interesting, but who knows?

Anyway, if you closely compare the photo above with the photo below you will notice that the building is symetrical and, in fact, it has two, identical legislative halls, one under each of the sections with the four pointed towers.

Here’s Parliament again, this time from the northeast as we made our way around to the underground tourist entrance on the north side.

Since WWII, Hungary has had a unicameral legislature called the National Assembly (Országgyűlés) that currently consists of 199 members, although at times there have been as many as 386 members.

The tour took us into where the Parliament meets. Well, actually, I discovered later that this hall is just for tours; the Parliament really meets in the twin hall on the other side of the building.

My favorite part of the tour was this cigar ashtray outside the assembly hall with each slot numbered so each member would be able to find his own cigar. It must have been unbearable in this place when all 30 of these stogies were fired up in close proximity – and this was only one of many of these ashtrays in this hallway! 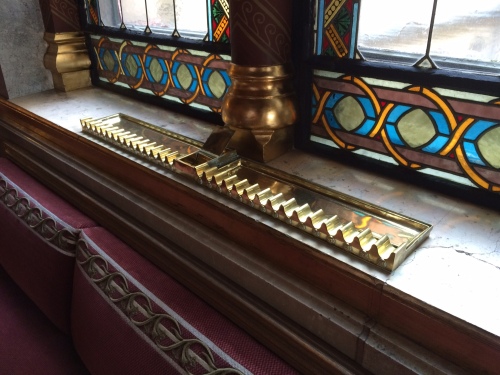 Every morning there’s a little performance in front of the Parliament Building that Dale called “synchronized soldiers” – it’s kind of like sychronized swimming.

But, it was all for show. The movements were quite intricate, but nobody would ever win a war marching in square dance formation like these guys were doing. 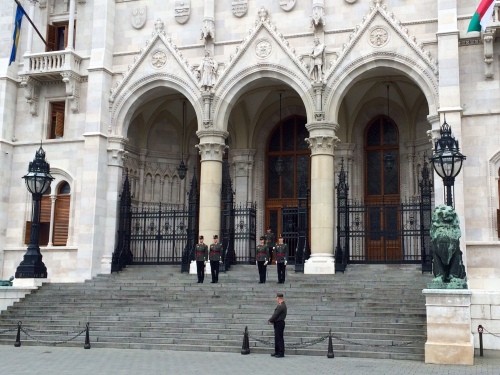 We enjoyed the show, and then something astounding happened. 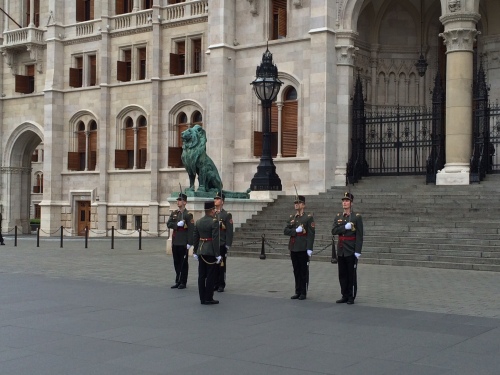 Which reminds me of something that I’ve noticed here, unlike the other places we’ve been to on this trip. The younger people here are generally friendly and helpful and most of them speak English. But the older generation (and quite a few middle-aged men) seem to consider tourists as mere pests or targets. We’ve had to dodge several cars that seemed to be intentionally trying to scare us by speeding up and aiming at us while in a cross-walk, then slamming on the brakes at the last minute.

I was surprised when the old lady didn’t give the crowd the finger.