We spent all day Sunday (yesterday) traveling by train from Budapest to Munich. Saturday was a clean and pack day, punctuated by going out to find ways to use up the rest of our Hungarian forints, the local currency. So, our last sightseeing day in Budapest was really Friday, the day after our boat ride to Szentendre, which we used to visit a completely different part of the city to the northeast: Városliget, the City Park.

In reading up on the things to do and see at City Park, I came upon several references to Millennium celebrations in 1896, so I decided to wait to write this post until we arrived in Munich in order to have time to do a little more research first.

As I had suspected, much of the construction that took place in Budapest near the end of the 19th century was in connection with a millennial celebration: the Parliament Building and the Fisherman's Bastion (as I had surmised); City Park and most of the buildings in and around it; and, the grand boulevard and subway leading to City Park from the city center.

The internet is an amazing tool. In Munich with a good connection I typed a word search into the browser on my iPad and up popped an abstract of this academic article: Articulating Identity through the Technological Rearticulation of Space: The Hungarian Millennial Exhibition as World's Fair and the Disordering of Fin-de-Siècle Budapest, Slavic Review, Vol. 69, No. 3 (Fall 2010).

Sounds like exciting reading, eh? Well, I was (and am) nursing a bad head cold, so I decided to give it a try. It turned out to be a really interesting read after all. Who woulda thunk it?

But something that I find even more incredible than the article or the fact that there is such a publication as the “Slavic Review” (or that there have been 69 volumes of it) is that you can locate information – not knowledge, but information – on virtually any topic, no matter how esoteric, in a matter of minutes. It's simply mind-blowing.

But enough of that, back to the story: We started our trip to City Park by taking the nearby M-2 subway which is 125 feet below the surface and is accessed by what must be the world's longest, steepest and most vertigo-inducing escalator: 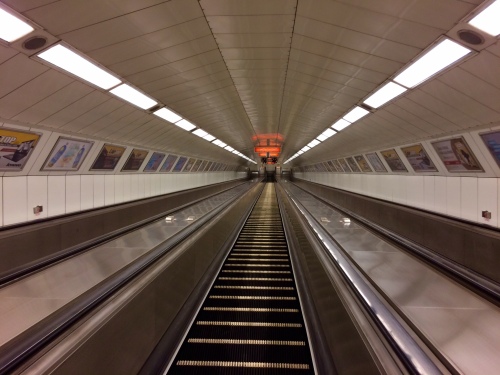 Once underground, we took the M-2 just one stop to a major underground transfer station where, after taking the escalators back up 100 feet, we transfered to the M-1, known to the locals simply as the “Underground.”

The Underground is the oldest subway system in Europe and the second oldest in the world (London has the oldest). It was dug entirely from ground level to a depth of barely 10 feet below the surface and built using a method known as “cut-and-cover.” It runs a distance of 2.3 miles directly under Andrássy Avenue, the main radial boulevard out of the city center, itself constructed as a wide promenade lined with apartments, shops, restaurants and cafes.

According to the article in the Slavic Review, Budapest hosted a World's Fair in 1896 called the Hungarian Millennial Exhibition and Andrássy Avenue and the Underground were constructed to serve as the main linkages between the two focal points of the Fair: the new Parliament Building at one end; and, the buildings and exhibits at City Park, accessed through the station at Hösök Tere (Heroes' Square), at the other.

It was weird getting off the Underground at Heroes' Square station with the street, Andrássy Avenue, directly overhead – literally above the ceiling you see in this photograph: 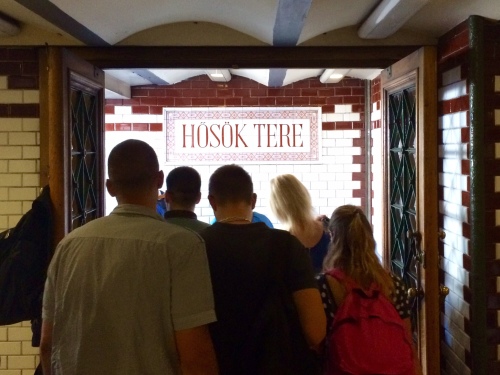 [By the way, I solved the riddle of the Parliament Building being “inaugurated” in 1896. Construction had started in 1885 with the intent that the project be completed by 1896 for the millennial celebration. But, it wasn't. However, the structure was up and the exterior was finished, so they did the “ribbon-cutting” at the celebration in 1896 (the “inauguration”) and completed the interior over the next several years.]

When we popped up from the Underground at street level in Heroes' Square, we were greeted by this beer-mobile, propelled around the square by peddling patrons. 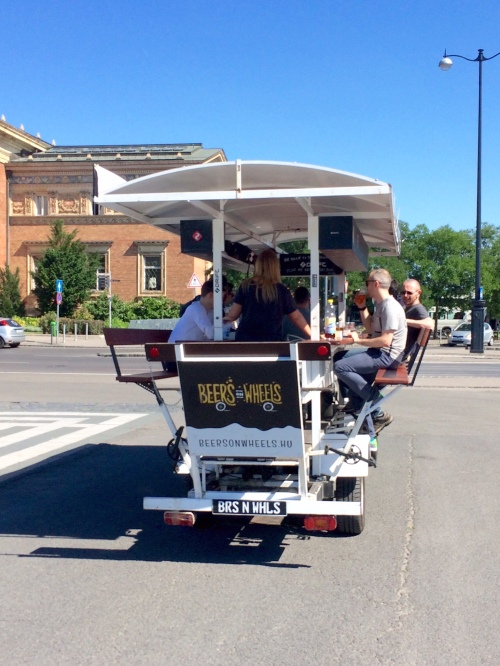 We were laughing so hard that it took us a few minutes to focus on anything beyond the beer-mobile, but we finally noticed the Palace of Contemporary Art (Műcsarnok), one of the buildings built specifically for the World's Fair, behind the plastered peddlers. 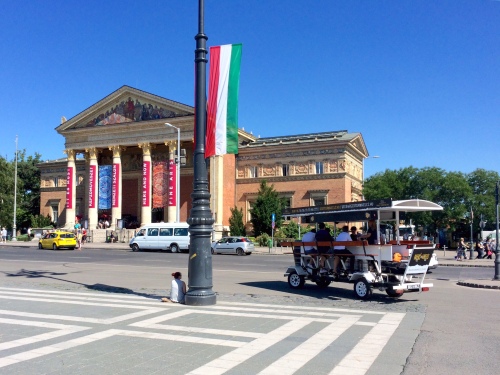 Here's another, more sociable beer-mobile, B-Class for you Mercedes fans. 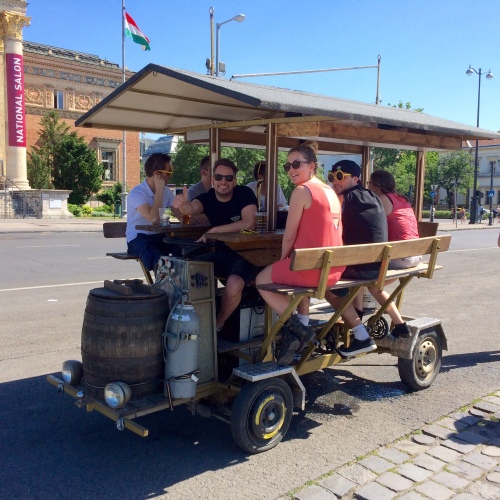 Directly opposit the Palace of (Contemporary) Art is the Museum of Fine Art (Szépművészeti Múzeum) which was completed after the World's Fair in 1906. 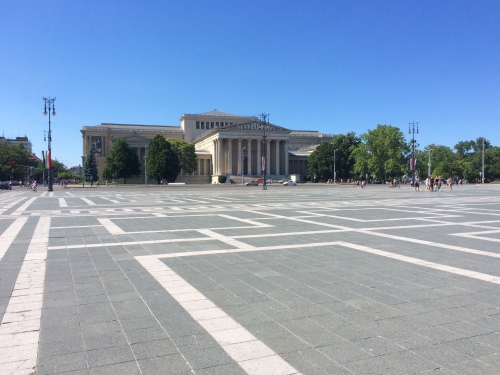 But the focal point of Heroes' Square is, of course, the Millennium Monument (Millenniumi Emlékmű) and matching colonnades with statues of all the Hungarian Heroes: 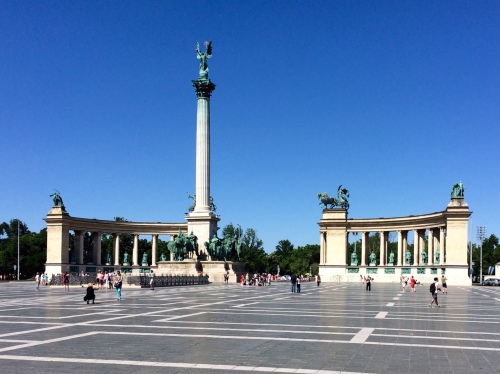 There are seven statues and reliefs on each of the two colonnades paying homage to 14 of the most prominent figures of Hungarian history, most of whom are former Kings of Hungary. The monument was begun the year of the World's Fair, 1896, when Hungary was part of the Austro-Hungarian Empire and the five left-most places were reserved for statues of Habsburg rulers. But the monument was damaged in WWII and when it was restored, it was rebuilt sans Habsburgs.

The base of the central column is festooned with equestrian statues of the chieftans of the seven Magyar tribes that settled the Hungarian Plain in the 9th century.

As I mentioned in an earlier post, the exact date that the Magyars occupied the Carpathian Basin is in dispute (it is thought to be some time between 888 and 900 A.D). So, in 1891 when the Hungarian Parliament decided to hold a millennial celebration it statutorily decreed that 896 A.D. would be the official date of the founding of Hungary in order to coordinate with the anticapated completion date of several projects that were already under construction, such as the Parliament Building.

I don't know about you, but to me this seems like an awfully strange way to go about determining the founding of a nation. I mean, I can understand having trouble deciding among competing events – say: the Declaration of Independence; or the Battle of Lexington; or the convening of the Constitutional Congress; or the adoption of the Constitution – but to just arbitrarily pick a date out of thin air? Really? 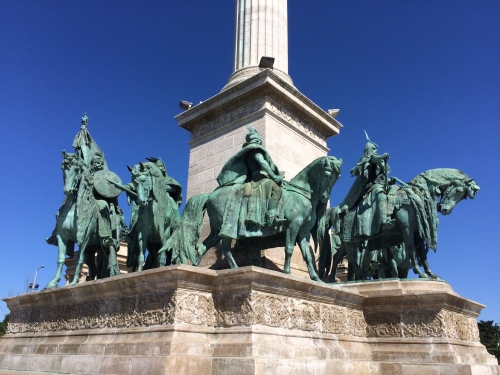 While we were at City Park, we thought we'd walk over to see the Széchenyi Baths (Széchenyi fürdő): 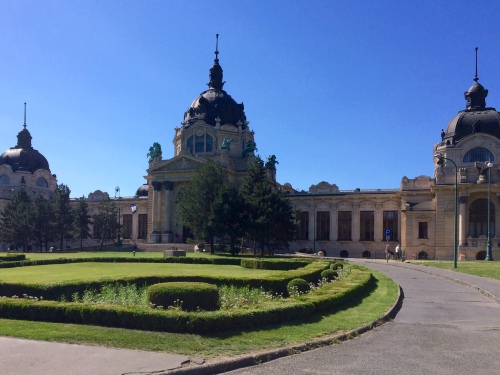 One of the books I've been reading on this trip, Danubia, by Simon Winder, has a comment to the effect that the Ottoman occupation brought mutton, turkish coffee and public baths to Hungary and that only the baths remain. I'd have to agree; there's very little Turkish influence left here in Budapest, with the exception of the public baths.

In spite of the heat, however, we had no desire to go to the baths which, to our eyes, just looked like over-crowded public swimming pools. Here's the one at Széchenyi: 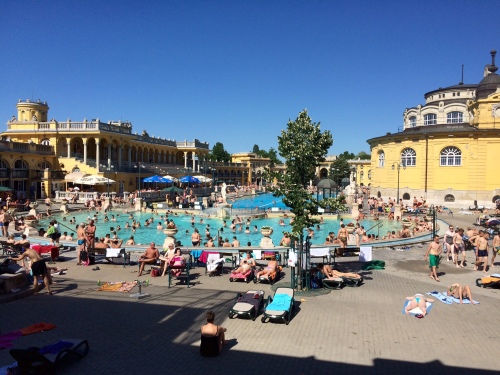 At any rate, that was it for the day. We headed back to the apartment and, as I said, prepared to leave for Munich. We were looking forward to trying those incredible escalators with our luggage! 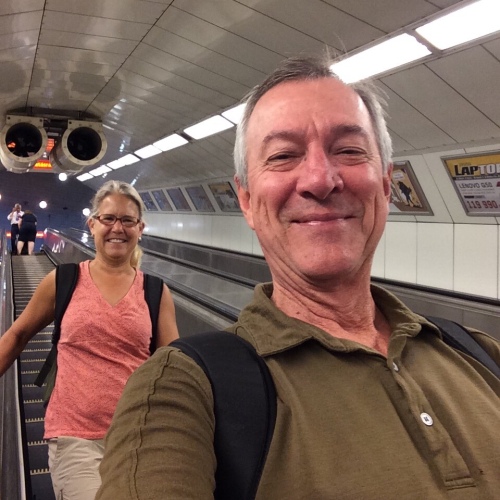