The weather has continued to be cool and overcast since our arrival in Munich, not really good for spending time outdoors at the Englischer Garten or a Biergarten, which is what we had hoped to do.

But the gloomy and foreboding feel of the day matched the mood and experience of our excursion to nearby Dachau and a visit to the first concentration camp to be put into operation by the Nazis.

Upon arriving at Dachau Concentration Camp Memorial Site, visitors enter through the same gate, the Jourhaus, that was used by the more than 200,000 prisoners who passed through here before and during WWII. 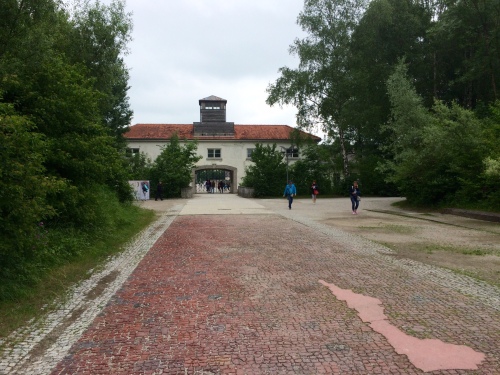 Going in, we pushed open the infamous wrought-iron gate with the slogan, “Arbeit Macht Frei,” that is, work will set you free. [This gate is a reproduction; the original gate was stolen about 6 months ago and the crime remains unsolved.]

Beyond the gate is the huge roll-call area where prisoners were sometimes forced to stand at attention for hours as punishment for an attempted escape. 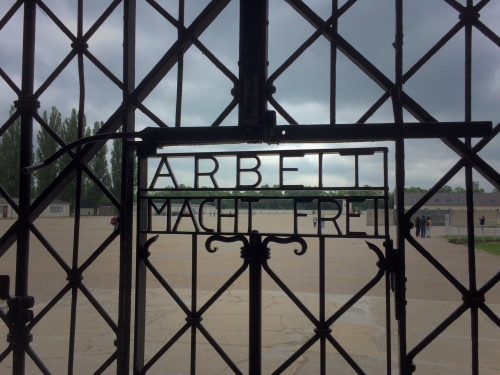 In March 1933, shortly after Adolph Hitler became Chancellor of Weimar Germany, construction began on Dachau concentration camp. I will write more about Hitler and his rise to power in my next post.

The original camp was considerably smaller than the camp we were visiting, having been constructed by the National Socialist Party (the Nazis) immediately after Hitler came to power in order to intern political opponents.

Over the next three years, an additional 6,500 men were interned here, adding to the political prisoners Jehovah Witnesses (who refused to accept Hitler’s authority), Roma (Gypsies), homosexuals, repeat criminals and other “asocials,” but very few Jews.

During 1937 and continuing into 1938, prisoners were forced to build numerous additional prisoner barracks and the camp was enlarged to accomodate a total of 6,000 prisoners in 32 barracks (an additional four barracks were used for other camp purposes). Nearly 19,000 prisoners entered the camp in 1938, many of them Jews following Kristallnacht in November of that year, but most of them did not remain here.

Here’s a panorama photo I took just after entering through the Jourhaus. The prisoner barracks are on the left, the roll call yard is in the center, and the administration and admission building is on the right:

Inside the camp, we followed the route all new prisoners took. Much of the admissions building now houses a museum explaining life in the concentration camp, as well as the rise of Nazi fascism.

I knew that the Holocaust took the lives of millions of innocent people, but I had no idea that the Nazis had such an extensive system for the collection, imprisonment and execution of human beings as what was shown by the exhibits here in the Group Room. 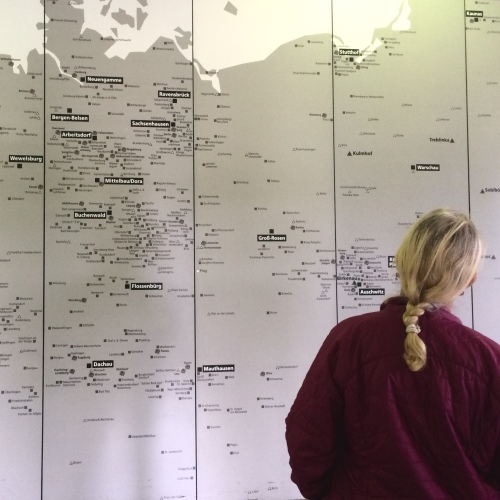 We spent nearly two hours reading the exhibits throughout the facility, but it was the experience of being here that gave us the best understanding of the horror and tragedy of what went on.

The Schubraum, where new prisoners were made to strip naked and surrender all possessions has, likewise, been stripped, exposing the original paint. 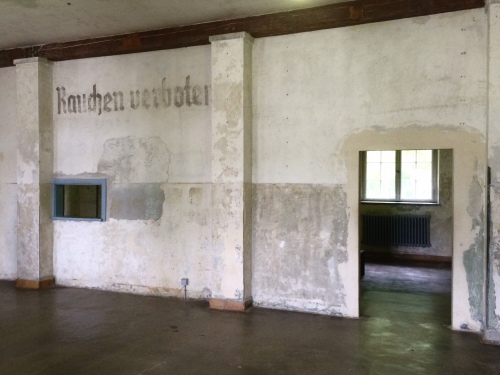 Here’s the view of the front of the rest of the administration and admissions building from inside the Schubraum. Imagine standing here, separated from everyone and everything known to you, naked and frightened, ordered about, and not knowing what the future might hold – or if there would even be a future. 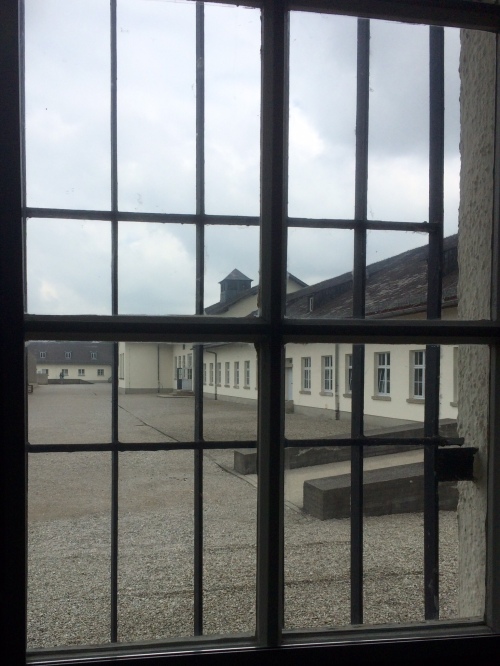 We continued through the rest of the administration and admissions building, reading the exhibits, then watched the movie, before leaving the museum and walking down the main road that separated the 16 barracks on the left from the 16 on the right.

Only the foundations of the barracks remain, although reproductions of the first two barracks have been erected and furnished as they existed during the various years of existence of the camp. [I have not included photos of the interiors of the barracks because the unpopulated, bare rooms and sparse furnishings give the impression that there is plenty of living space, which there undoubtedly was not.]

As I mentioned, Dachau was the first Nazi concentration camp; it was run by the SS (Schutzstaffel), the “political soldiers” of the Nazi Party, headed by Heinrich Himmler.

Dachau was the prototype for all other camps in the system and many of the commandants of the most infamous concentration and death camps were trained here at the facilities adjacent to the Dachau camp.

The Dachau concentration camp was in continuous operation from 1933 until the end of the War and the liberation of the camp by the U.S. Army on April 29, 1945.

Atrocious medical experiments were conducted on some of the prisoners here, in a couple of the frontmost barracks, such as testing the limits of pressure and temperature on the human body, often leading to death. 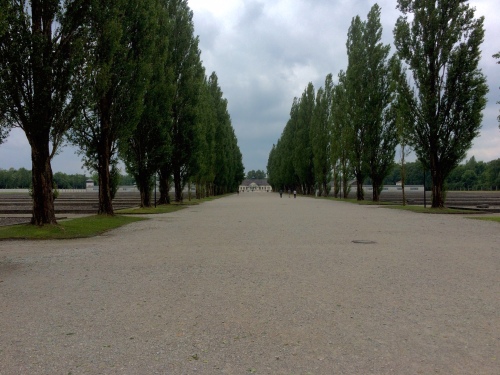 There was little opportunity for escape from Dachau, although not all prisoners interned here stayed here. Many of the Jews that were brought to the camp in 1938 were released and deported, but after 1942, most Jews and others that left here were being transferred to the gas chambers at other facilities.

Even with the transfers of many Jewish prisoners, by 1942, Dachau was well over capacity with 12,000 internees, double what the camp had been designed to house. 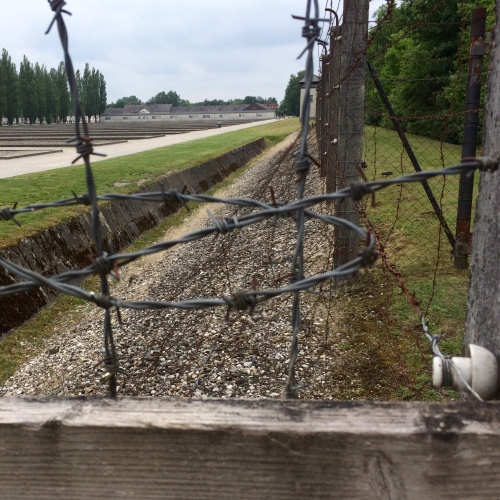 Those that were not transferred out faced a very bleak and uncertain existence in the camp as conditions worsened as the War progressed badly for the Germans. Rations ran out, new inmates arrived (many from other camps in the East as the Red Army advanced) and disease was rampant.

Things became so bad and death so commonplace that the original crematorium that was used to dispose of the dead was expanded by the addition of a second, larger furnace housed in this innocuous looking building at the rear of the camp and known as Barrack X: 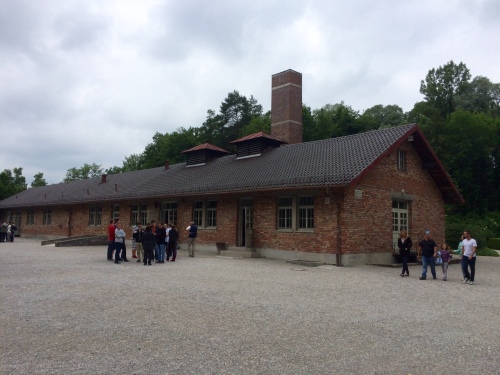 At the time of its liberation in 1945, there were 67,665 registered prisoners in Dachau and its surrounding subcamps, more than half of which were in the Dachau concentration camp itself. That’s 34,000 people living in a facility designed for 6,000!

According to everything I read (which included several articles in Encyclopedia Brittanica and the website of the United States Holocaust Memorial Museum – which is excellent, by the way), as well as the exhibits and brochures at the camp itself, the conclusion is that throughout its existence, Dachau served primarily as a political prisoner internment camp, not as a “killing camp.”

But that doesn’t mean there weren’t facilities for the job: Barrack X did have a gas chamber, shown below from the inside, that all investigations to date have concluded was never used. 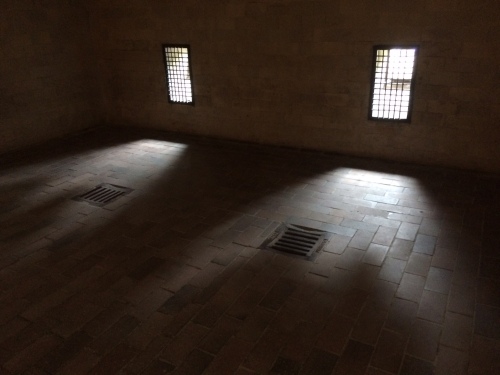