Tomorrow is the annual Stockholm Marathon. Nearly 16,700 runners have signed up. We are not among them. Without knowing it, however, we completed 1/3 of the course today, hiking from our apartment in the Vasastan district down to Gamla stan, literally, the Old City, and back.

Yesterday, after morning coffee, we found the grocery store and the ATM, then reconnoitered the neighborhood. Just down the street from our apartment is a tunnel under the rail and ring roads that provides easy access to the waterfront and the Karlbergs Slottspark (castle park). Here’s the view looking back towards “home” after we passed through the tunnel (our building is behind the pink one on the far left of the photo): 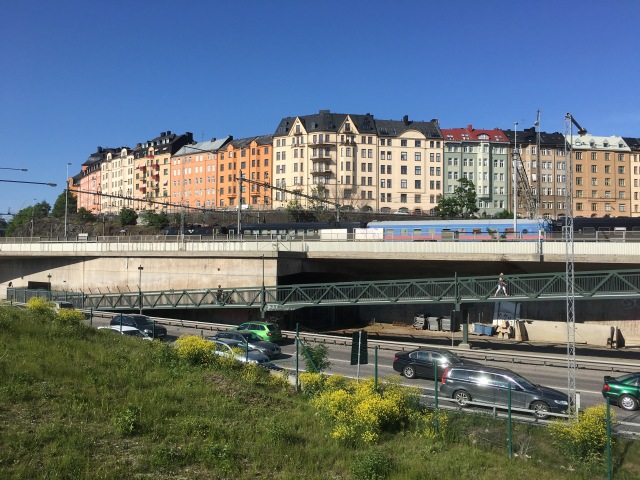 Lots of people were out walking and enjoying the waterfront.

Today, it was a 4-mile walk to Gamla stan which is not only the oldest part of Stockholm, it’s also the location of the Riksdaghuset (the Parliament House) and the Kungliga Slottet (the Royal Palace). Here’s the view as we approached Gamla stan:

And here’s the Parliament House (we hope to take a tour tomorrow while the marathon distracts everybody).

It seems like all the old city centers of Europe have been converted into rows of tourist shops selling trinkets and cafes selling coffee, beer, wine and ice cream; Gamla stan is no different.

We made our way through and around the Old City, returning past the uncrowded rear enty to the Royal Palace.

As our stomachs grumbled, Dale remembered that this week is the “Taste of Stockholm,” a food festival in the Kungsträdgården, a downtown park, and we managed to stumble into it, right at lunchtime and just as a cook-off was wrapping up on stage. 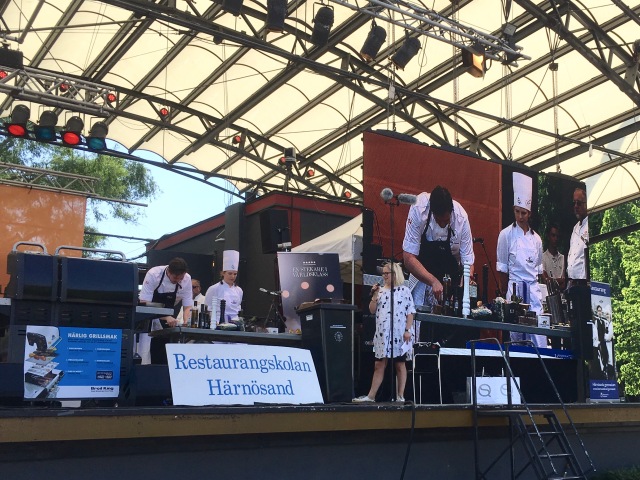 We sat and ate with the lunch break crowd…

… then began our trek back to the apartment. Everyone was dressed for summer weather, which allowed these girls to show off their special tattos.

As we got close to our neighborhood, we heard honking and cheering coming from down the street. I remembered something similar when we were in Denmark a couple years ago around the same time of year – the high school seniors all pile into the backs of trucks and cruise around town, drinking and celebrating their graduation together. They apparently have the same custom here, but this class hired a garbage truck for their adventure!

I think they were planning to get “trashed.”