We hopped in the van in Kaunas on the final day of our cycling tour of the Baltic countries and drove for about an hour to Elektrenai on the edge of Lithuania’s “Lake District.” Again the description of the ride was a little inaccurate.

For about an hour, we cycled along a road heavily used by trucks and local traffic, overtaking other cycling groups also arranged by our tour operator, on a road with no shoulders. It was harrowing at times, although these two photos don’t show it – I only risked taking pictures when there was no traffic and the road was good. 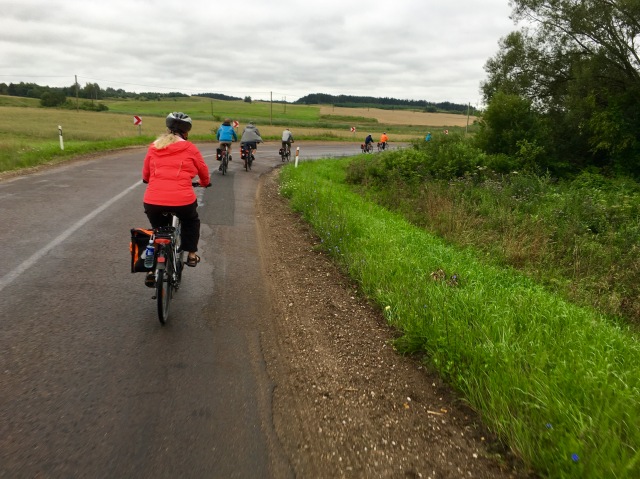 This was the only time we rode in a group; mainly, I think, because everybody had to go the same cautious speed and there was strength in numbers: cyclists vs. trucks and automobiles.

After an hour or so of cycling, we came to an abandoned Orthodox Christian church and a fork in the road where our van was waiting to point us in the right direction, which we appreciated. I mentioned previously (in the post about the Hill of Crosses) that the Orthodox Christian cross has two horizontal bars, as you can see in the photo, below.

It was actually in Estonia, however, that we saw the greatest influence of the Orthodox Church, due to the fact that 25% of its population is ethnically Russian. Today, both Estonia and Latvia are predominantly Protestant, having first been catholicized as of 1290 by German crusaders, then conquered by and incorporated into the Swedish Lutheran empire by Gustavus Adolphus during the Thirty Years War in the 1600s.

But, the German crusaders were never able to conquer or convert Lithuania to christianity and the Lithuanians remained the last pagan people in europe. Nevertheless, the crusaders continued in their attempts. So, in 1386, in order to stave off the crusaders’ aggression, Jogaila, the Grand Duke and ruling monarch of Lithuania (who was born pagan), personally converted to Catholicism in order to marry the Polish Queen, Jadwaga, thereby becoming King of Poland. This unified the Kingdom of Poland and the Duchy of Lithuania in the person of now-catholic King/Duke Jogaila. Almost immediately, the Lithuanian royal court also converted to Catholicism, followed soon after by the rest of the Duke’s subjects in Lithuania. The country remains, to this day, a predominantly Catholic nation.

Even prior to Jogaila’s conversion, however, the Duchy of Lithuania had been expanding its empire to the south and east under Jogaila’s grandfather, Grand Duke Gediminas. And though I think I know a fair amount about European history, it came as a surprise to me to find out that during the 14th and 15th centuries, the Duchy of Lithuania was the largest empire in eastern Europe, stretching all the way from the Baltic to the Black Sea, incorporating nearly all of present-day Ukraine and Belarus. Betcha didn’t learn that in high school.

The union of Lithuania and Poland was formalized by treaty in 1569 (Union of Lublin), creating a dualistic state known as the Polish-Lithuanian Commonwealth which was the largest and most populous empire of Europe in the 16th and 17th centuries and lasted until 1795 when it was carved up by and among the Prussian, Austrian and Russian Empires in response to French Revolution inspired popular uprisings against monarchy.

About now, you’re wondering, “why is he going into all this detail about the Duchy of Lithuania?” I’m glad you asked. Our destination today, and the end of our cycling expedition, is the island castle at Trakai, the former capital of the Duchy of Lithuania (1321-1323). How’s that for a segue? 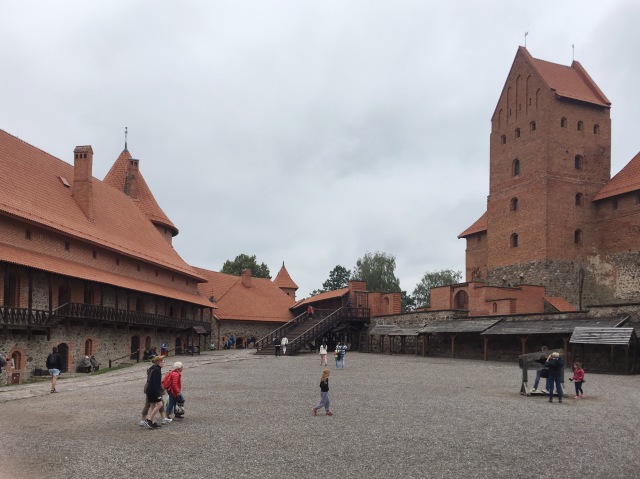 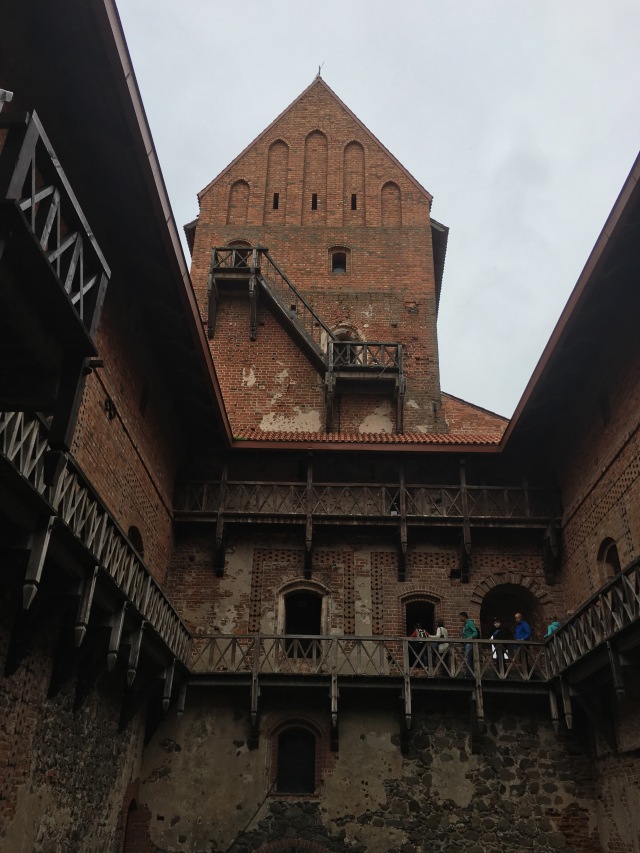 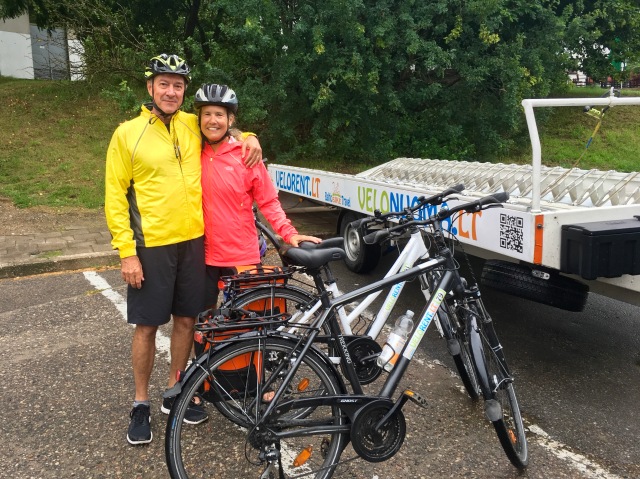 We drove from Trakai to Vilnius, the present-day capital of Lithuania, checked into our hotel and posed for a group photo… 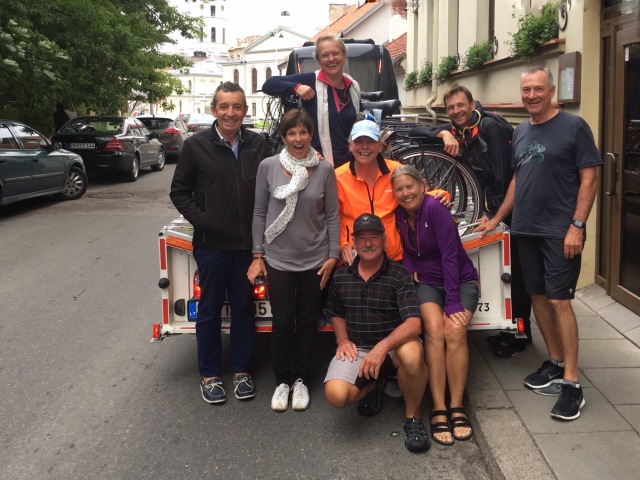 …before heading across the old city in search of somewhere to have dinner (by the way, the statue on the right is Grand Duke Gediminas). 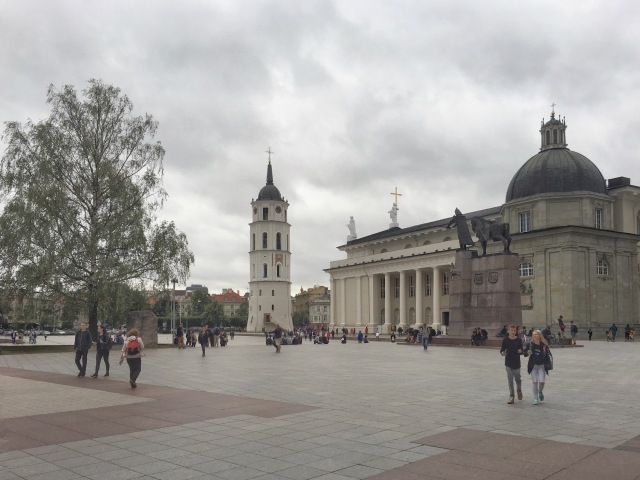 Our German friends had gone on ahead of us, so they weren’t in our group photo, but I had taken a picture of them on Nida as we waited for the ferry. This one’s better than the one I took of them in the van, sleeping. 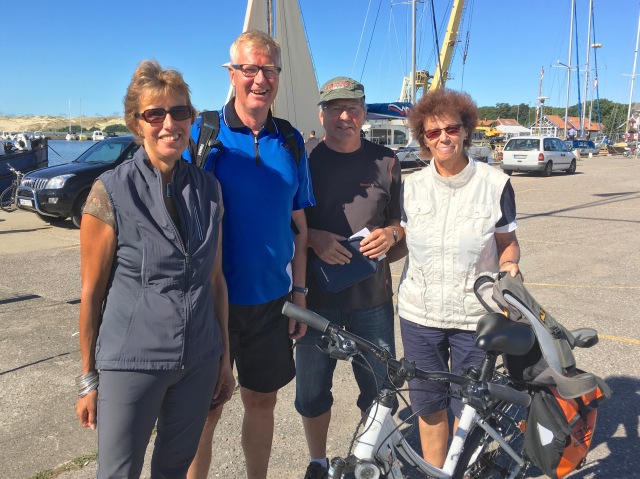 Tomorrow we fly to Moscow….