Not wasting any time in Moscow, we went on our first tour after dinner: 3 hours in the Moscow Metro (Моско́вский метрополите́н). Dale arranged all our tours through Happy Moscow Tours and we were lucky enough to have Ludmila as our tour guide on two occasions: the Moscow Metro; and, the Kremlin (in her other life, Ludmila is a history teacher).

Moscow, as everybody knows, is the capital of Russia (and of the former Soviet Union until its dissolution in 1991). It is one of the world’s largest cities with a city population of nearly 11 million people (15 million in the metro area). In fact, outside of Asia, it is the 2nd largest city in the world (São Paulo, Brazil, having just edged past it) and the 4th largest metropolitan area (behind Mexico City, São Paulo, and New York).

Since New York City’s subway system is the largest in the United States (as well as being the one most familiar to me), I wanted to look at some comparisons. Moscow’s Metro and the NYC Subway have about the same amount of track (Moscow has 207 miles; New York has 233), but New York has twice as many lines and stations (Moscow, 12 lines, 200 stations; New York, 24 lines, 422 stations) which means that the stations are farther apart in the Moscow Metro than in the NYC Subway.

The surprising statistic is average daily ridership: Moscow’s Metro carries 40% more people than New York’s Subway (Moscow, 6.7 million people daily; New York City, 4.8 people per day). How? The answer is that Moscow’s trains run incredibly frequently at 2 minute intervals throughout the day and at only 90 second intervals during rush hour! And the trains are faster. Standing in a station, it seems that as one train departs, another arrives. It’s like a conveyor belt for people and quite a marvel of coordination. But, it also means riders have to move fast when the doors open, since the trains do not linger and the doors only stay open for 10 seconds and are like guillotines when they close. 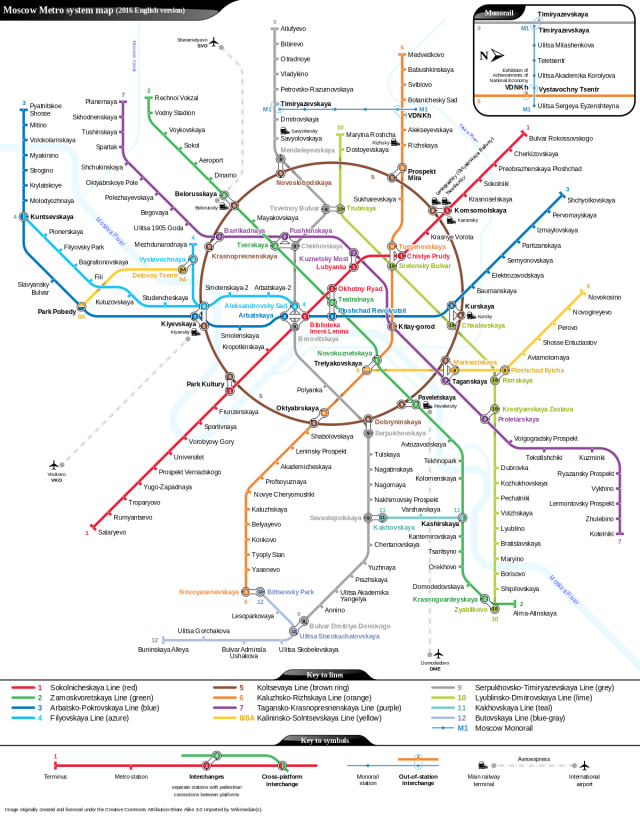 I want to point out that although the station names on the above map of the Moscow Metro are in English, there is virtually no English signage in the Moscow Metro itself – everything is in Cyrillic – so don’t think you’re going to be able to get around by yourself. We didn’t even try.

A few interesting tidbits: for the most part, the lines are numbered in the order they were constructed (ie., Line 1 was opened first in 1935, Line 12 opened in 2003); going toward the city center, the stations are announced with a male voice (going to work), but on the trains outbound from the city center, they are announced by a female voice (going home); and, of course, there is one ring to bind them all – Line 5, Koltsevatya, the brown ring, opened in 1950.

Our tour of the Moscow Metro with Ludmila included 12 stations, but I’m going to just focus on a couple of them. The first is Mayakovskaya station on Line 2, the station nearest our hotel and the busiest and loudest of the stations were visited. Many (75) of the stations are deep underground and Mayakovskaya is one of them at 108 feet below the surface. 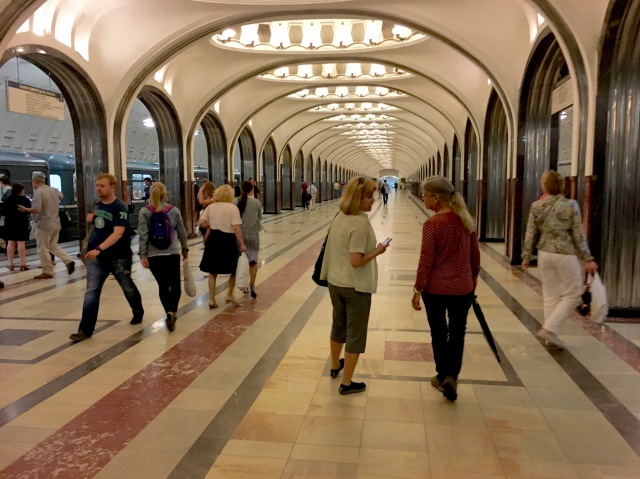 Ludmila explained that this station, like other stations of Lines 1 through 4, also functioned as a bomb shelter for the Moscow populace during WWII, as shown in this photo: 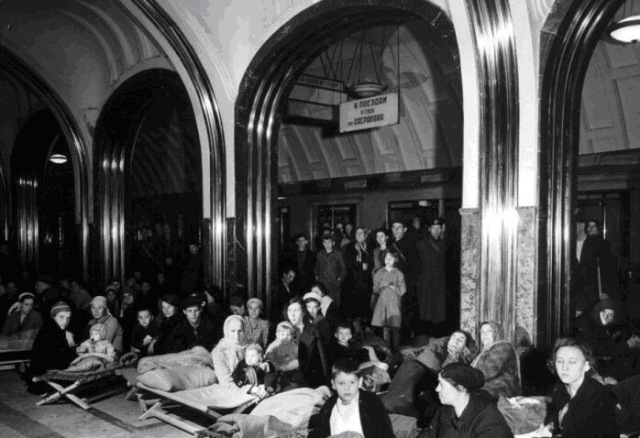 Novoslobodskaya station on Line 5 is a favorite of foreign visitors because of its stained glass: 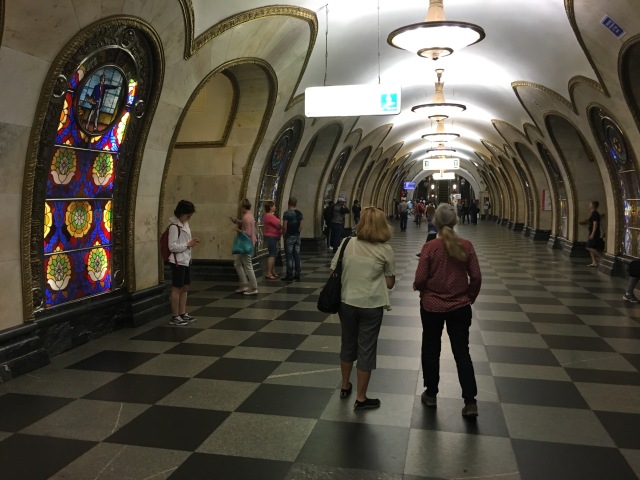 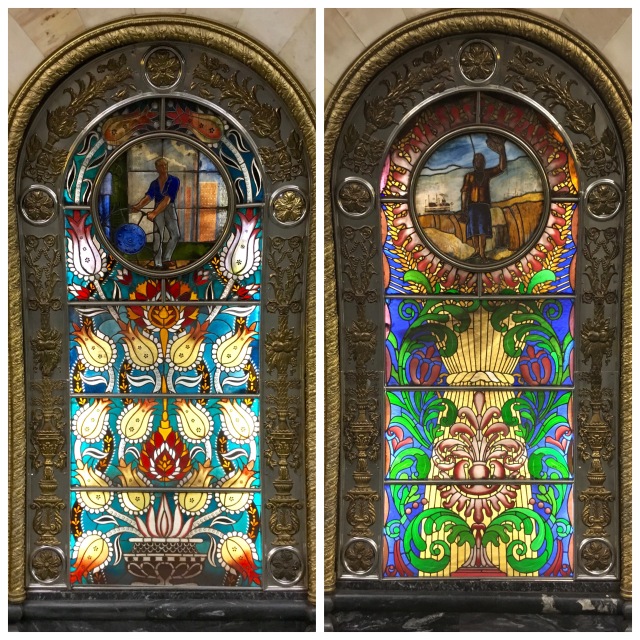 It turns out that the religious undertones one feels in this station are not imaginary. Take a look at this mosaic on the far wall of the station; the imagery is clearly Christian: Madonna with child, heavenly glance of the Christ child, doves of peace. 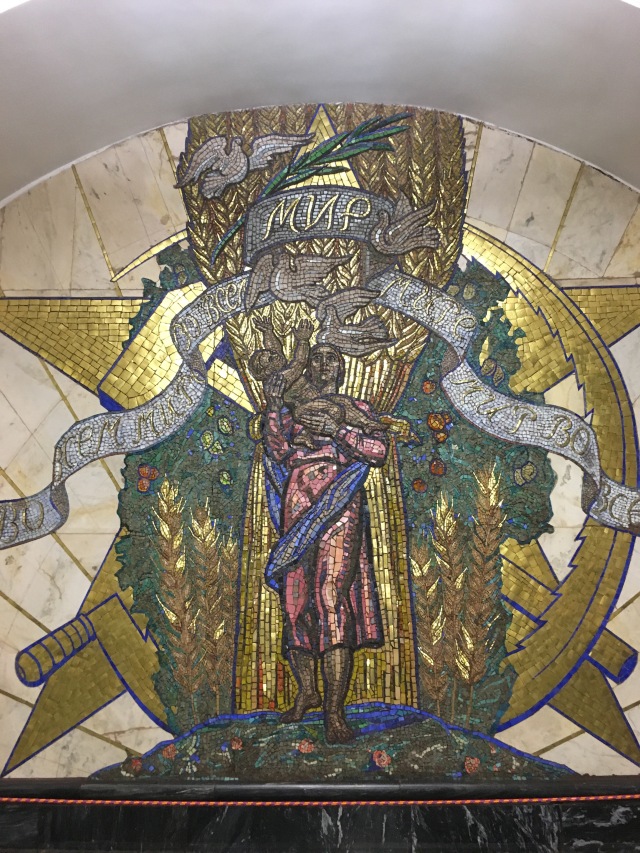 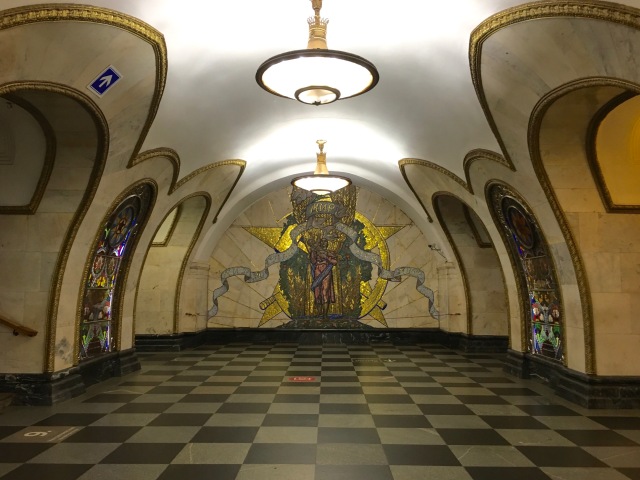 So how did the designers of this station get away with this religious motif in the Soviet age of “religion is the opiate of the masses?” Simple, put a profile of the General Secretary of the Central Committee of the Communist Party above it all! Here’s what it looked like when the station was first opened and inspected by the Soviet grand leader, Joseph Stalin, in 1952: 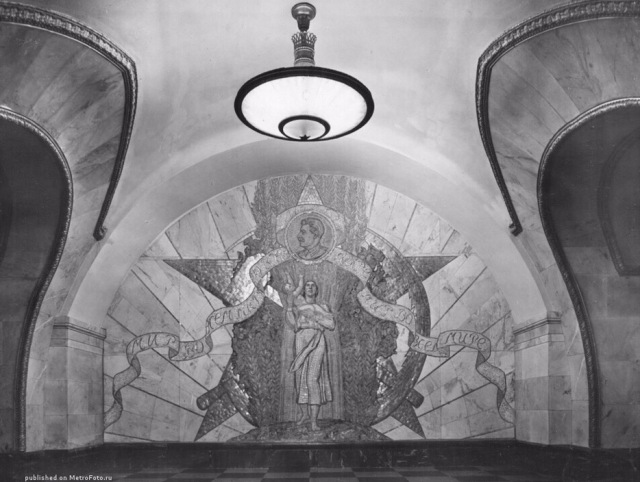 Stalin was the head of the Soviet Union for 31 years, following its founder, Vladimir Lenin, in 1922. During these years, the United States had four Presidents: Coolidge, Hoover, Roosevelt (3+ terms) and Truman. But after Stalin’s death in 1953, the astrocities committed during his tenure became known and his successor, Nikita Kruschev, who was in power from 1953 until 1964, attempted to erase Stalin from the public sphere. Today, only three statues of Stalin are exhibited in Moscow and all of his likenesses in the Metro stations have been removed. Here’s an example from the Kiyevskaya station which is on the brown ring, Line 5: 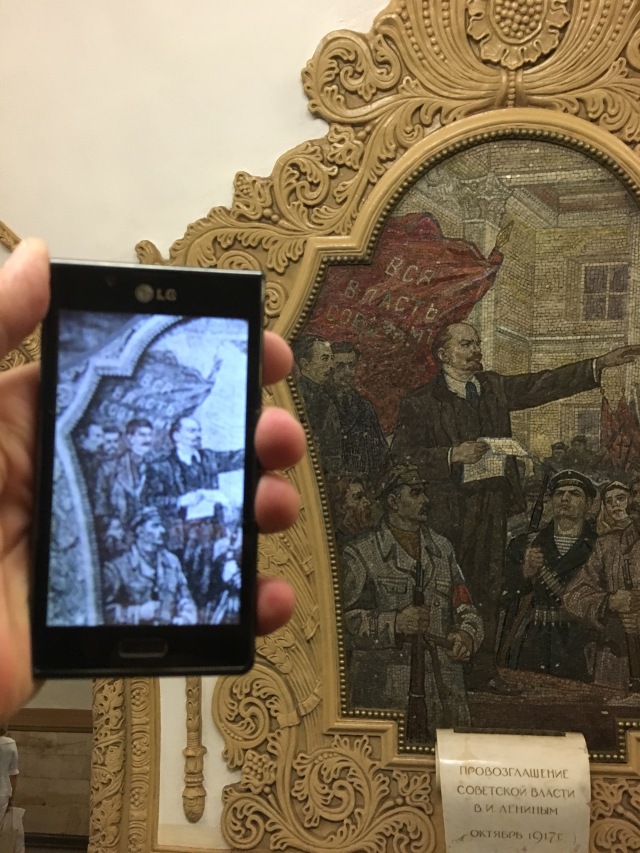 Many of the stations are adorned with beautiful mosaics… 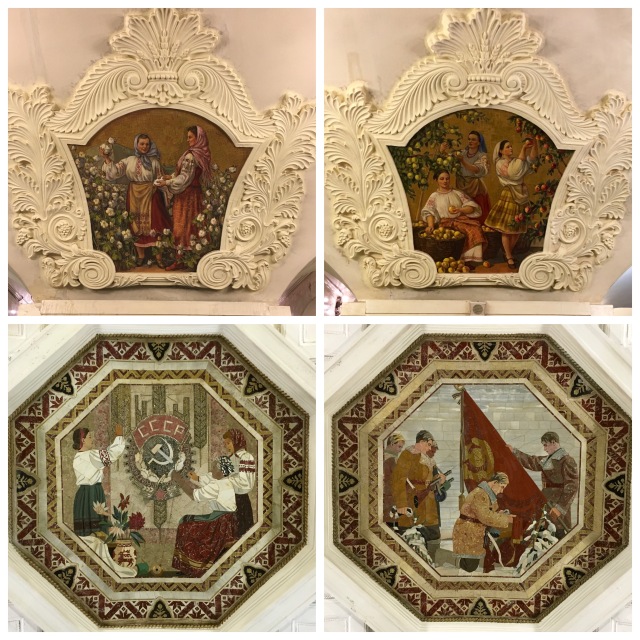 …and others, by bronze statuary… 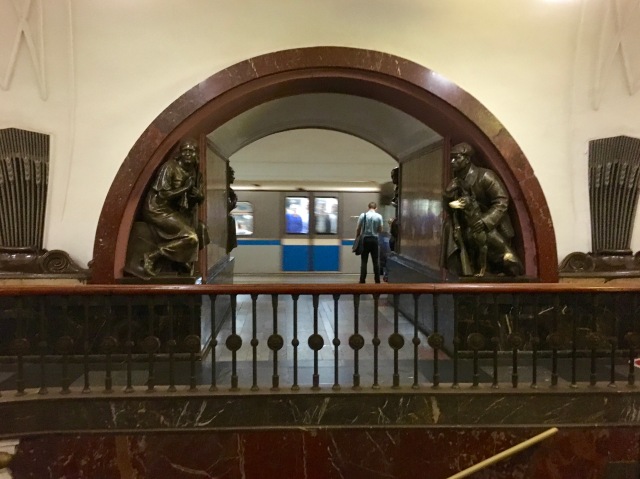 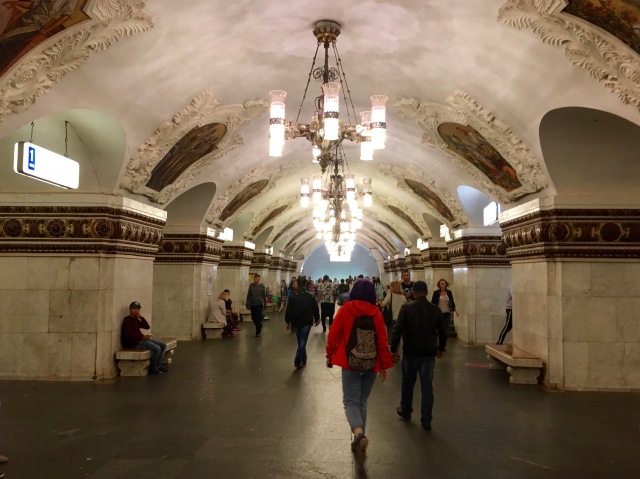 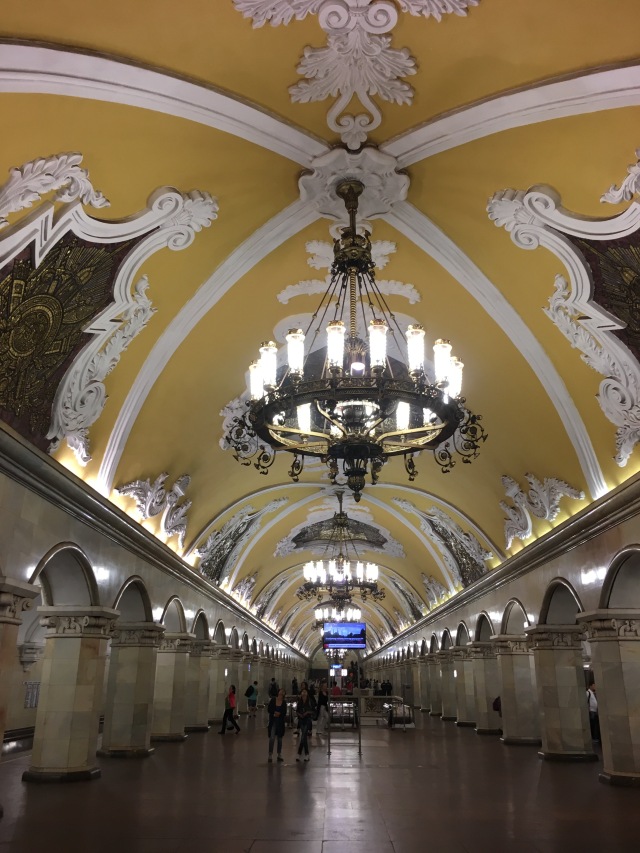 One of the last stations we visited on our tour was the Park Pobedy station on Line 3, the deepest station at 276 feet (84 m). It is one of the more modern (and least adorned) stations, having opened in 2003. It was almost 11:00 p.m. when we arrived here and the station was empty (the system is closed from 1:00 a.m. to 5:00 a.m. for cleaning and maintenance). 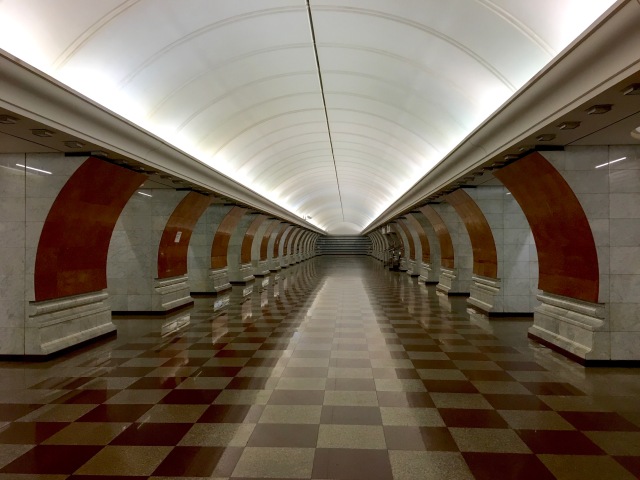 This station also claims to have the longest escalator in Europe at 413 feet (126 m); it takes 3 minutes to ride to the surface! 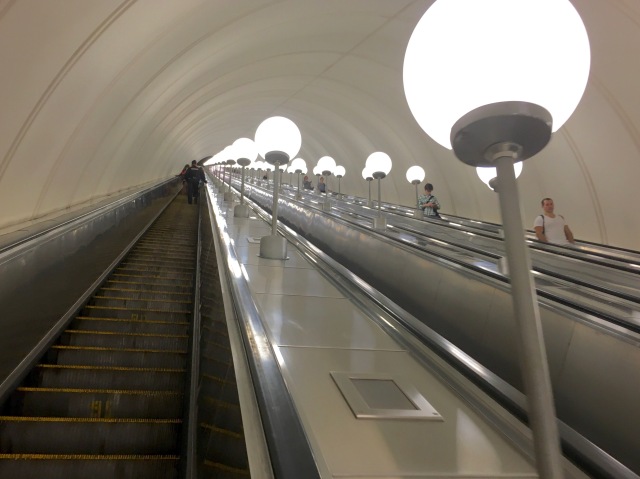 We rode it up and back down, then boarded our last train back to Mayakovskaya station and our hotel. We were lucky enough to catch one of the art gallery cars for our final ride: 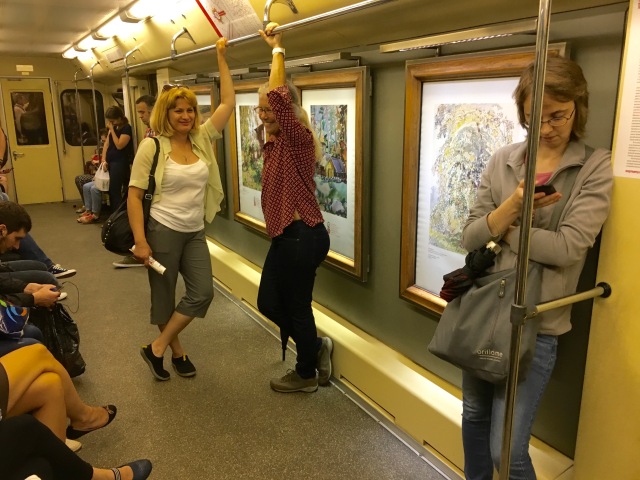