On our drive out to Jasper, the “low battery” light went on. Diagnostics on Tuesday showed that our chassis batteries needed to be replaced. Fortunately, there’s a NAPA auto parts store in Jasper where I was able to get the exact pair of batteries we needed, replacing the old ones in the RV without incident – a surprise, since the cabinet they are in is so tight. But that left us with only a half-day for hiking and the best place for that was Maligne Canyon, just east of town. On the drive out, we saw our first elk. It looked like he was trying to decide whether it was worth the trouble to head south to Banff and Lake Louise. 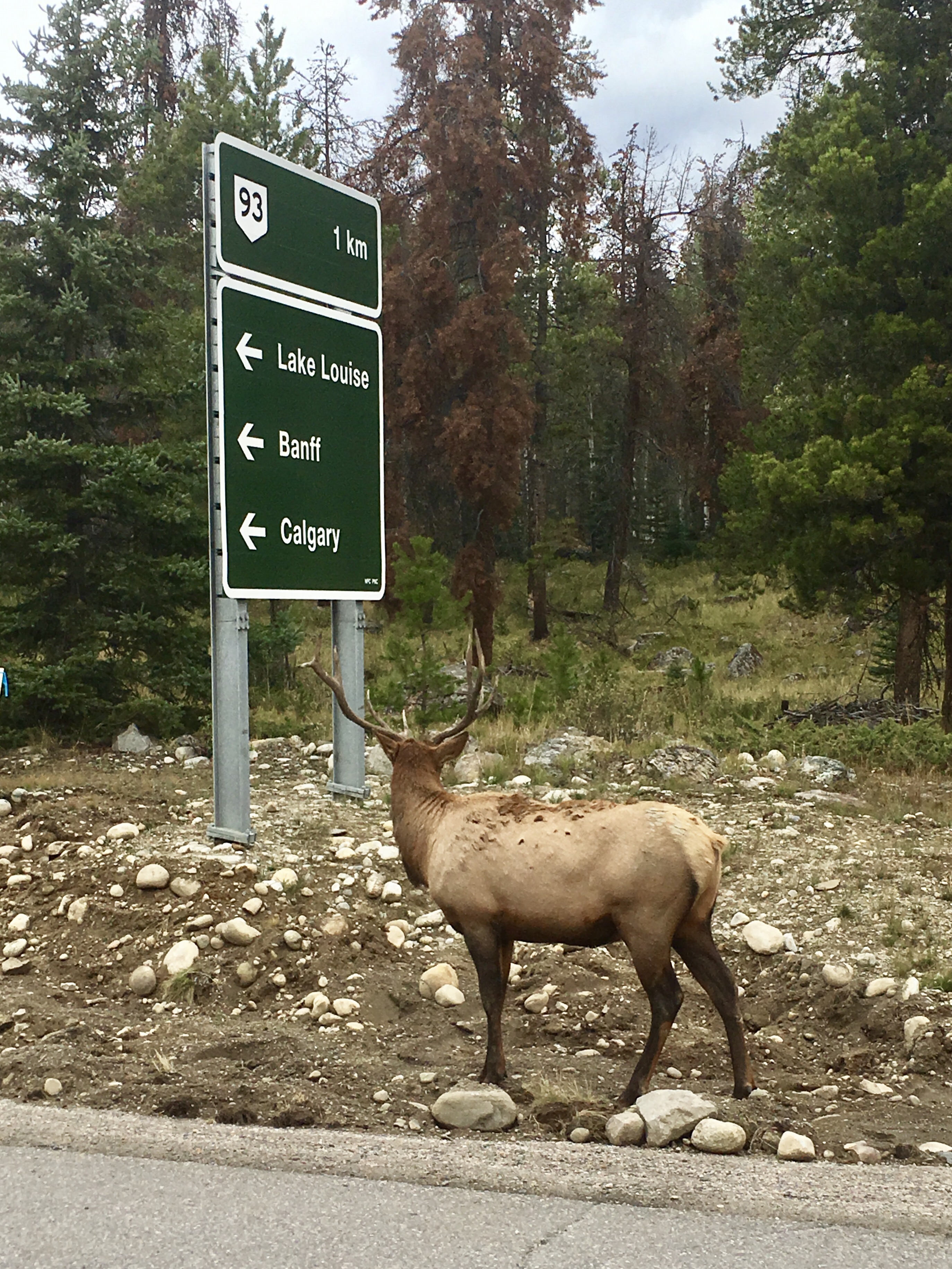 Maligne Canyon (pronounced “Ma Lean”) is crossed by six bridges, referred to by number and starting on the east at a heavily trafficked visitor center and restaurant at First Bridge. We started our hike at the west end at Fifth Bridge, hiking uphill on the north bank. 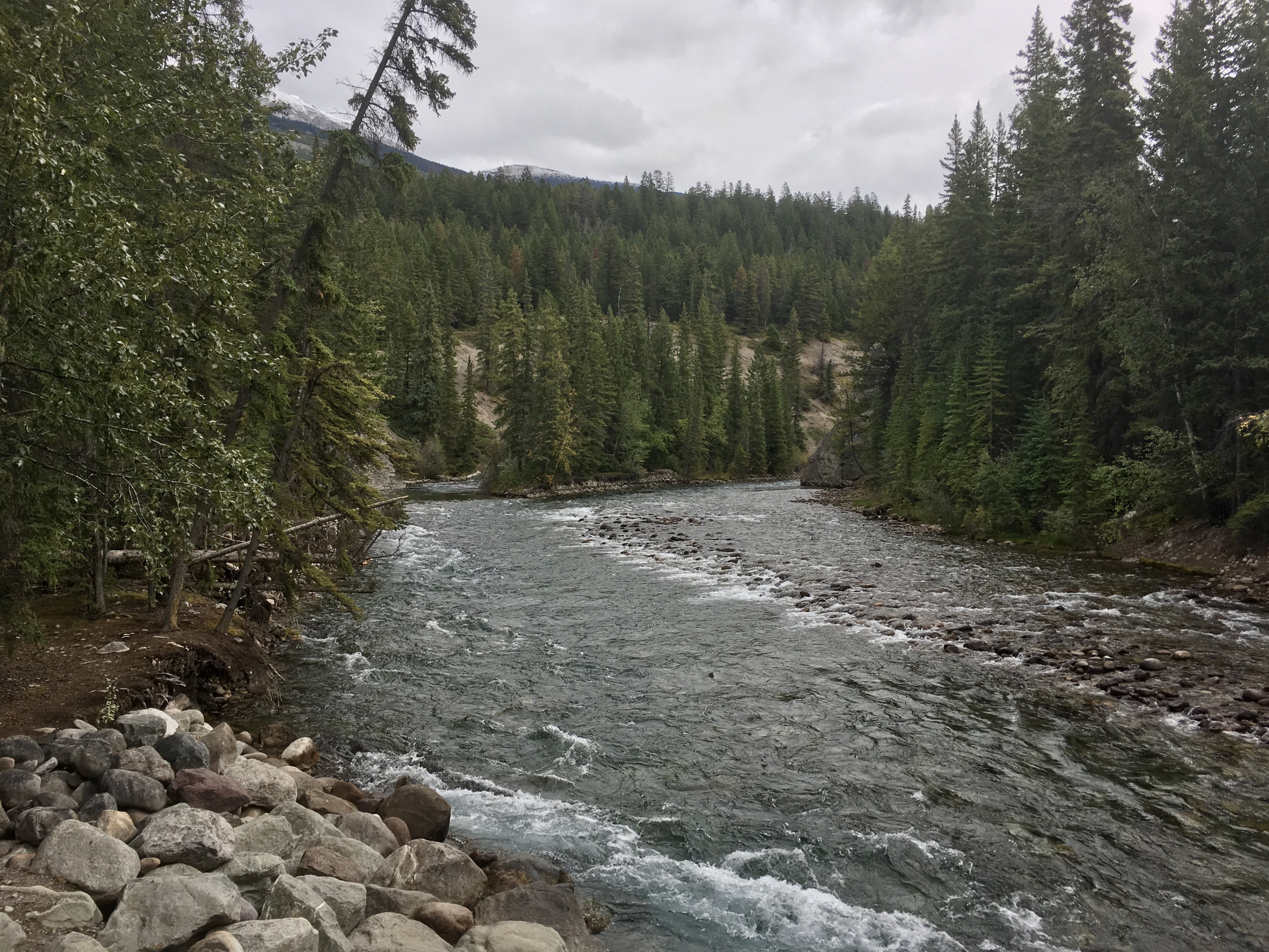 It’s not a long hike, nor is it difficult. In fact, after less than a mile, the path became a leveled, improved walkway with a handrail to prevent tourists from leaping off the trail into the river. Didn’t stop us, though. 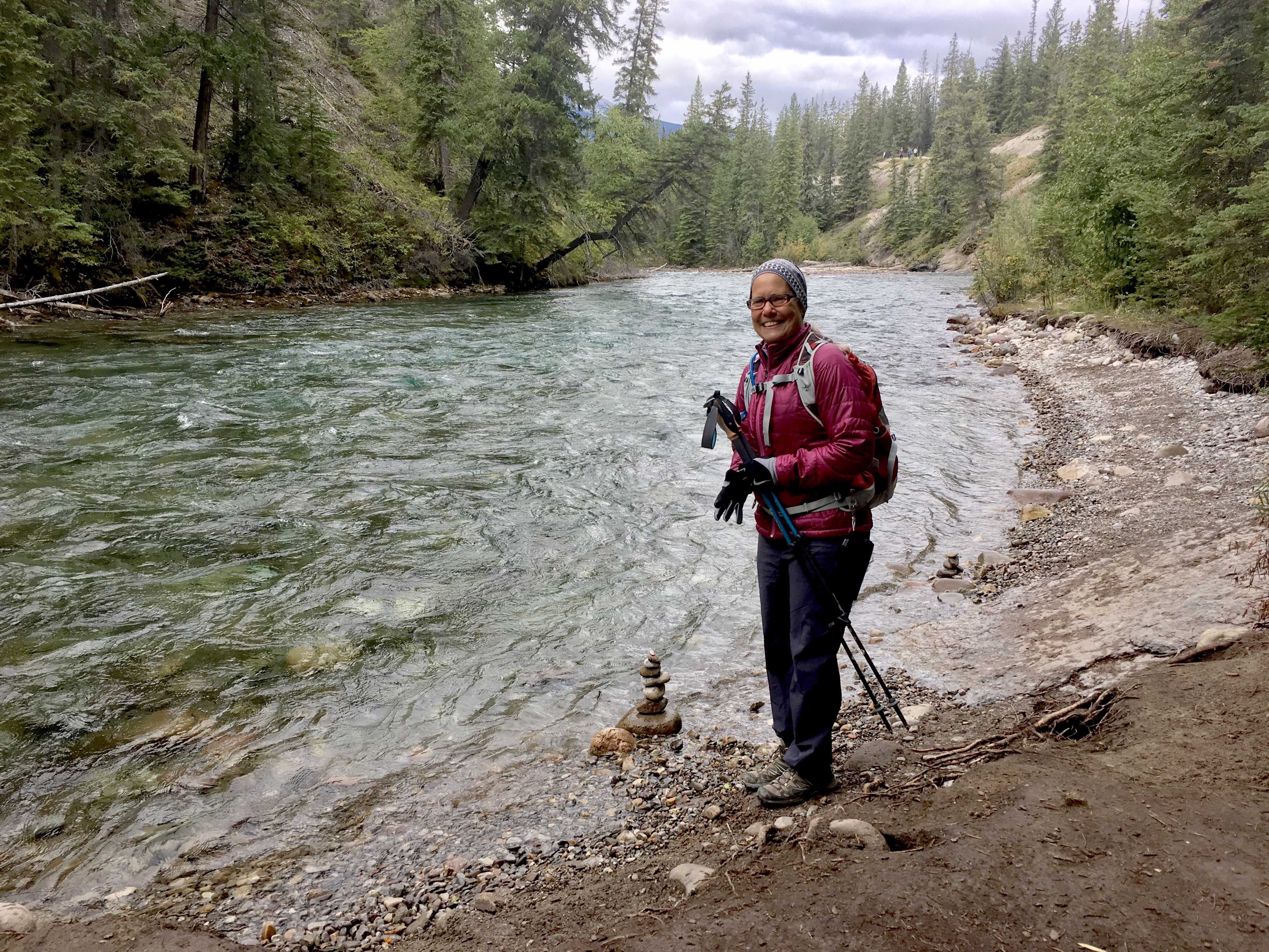 The Maligne River was beautiful. 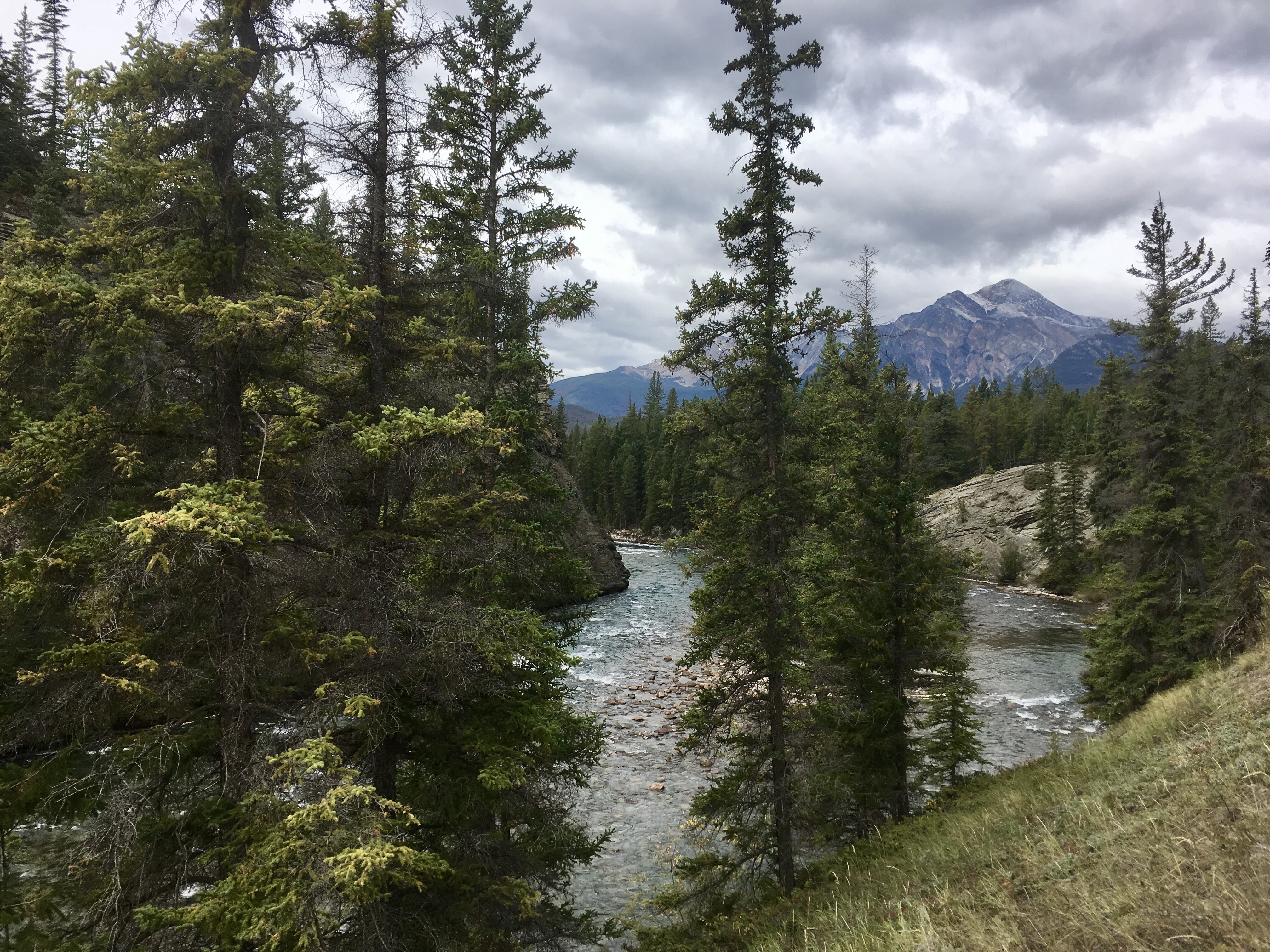 One theory is that Maligne Canyon was created by a fault in the bedrock, evidenced by the south bank being about 9 feet higher than the north bank, and that movement of the earth and glaciers diverted a river through the canyon, which was deepened by erosion over the centuries. The other theory is that the canyon was part of an underground cavern system that was exposed by glacial retreat, as evidenced by the fact that there are several “springs” along its sides that flow into the Maligne River from the underground karst system, such as this one: Whatever its origination, the canyon has become very deep in places, like here at Third Bridge: 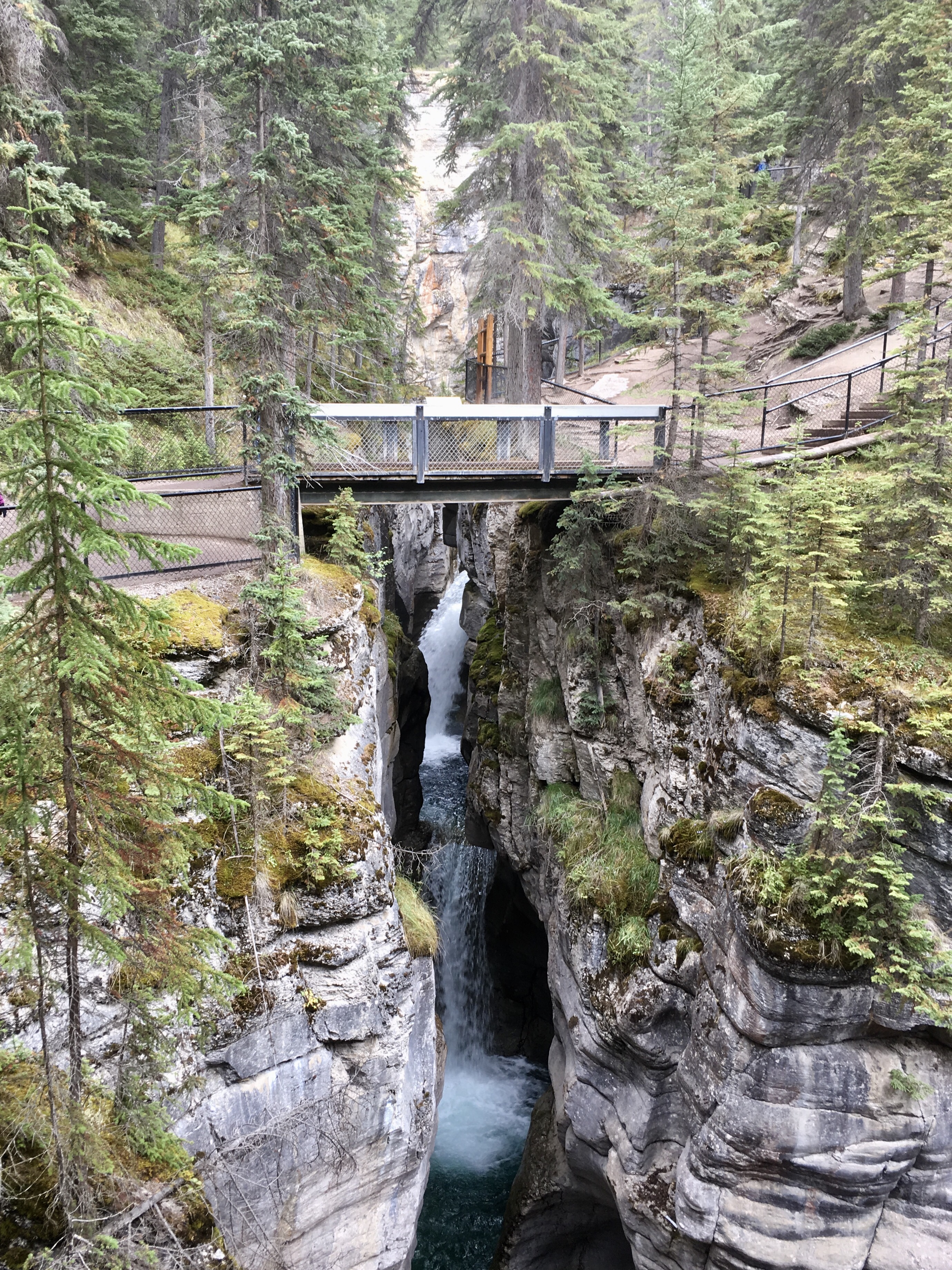 By the time we reached the visitor center at First Bridge, we had had enough of the crowds streaming west towards us, so we looked for an alternate hike back and found one a few hundred feet higher, away from the river. As we neared the end, we were treated to a view of Jasper, off in the distance, over my right shoulder: 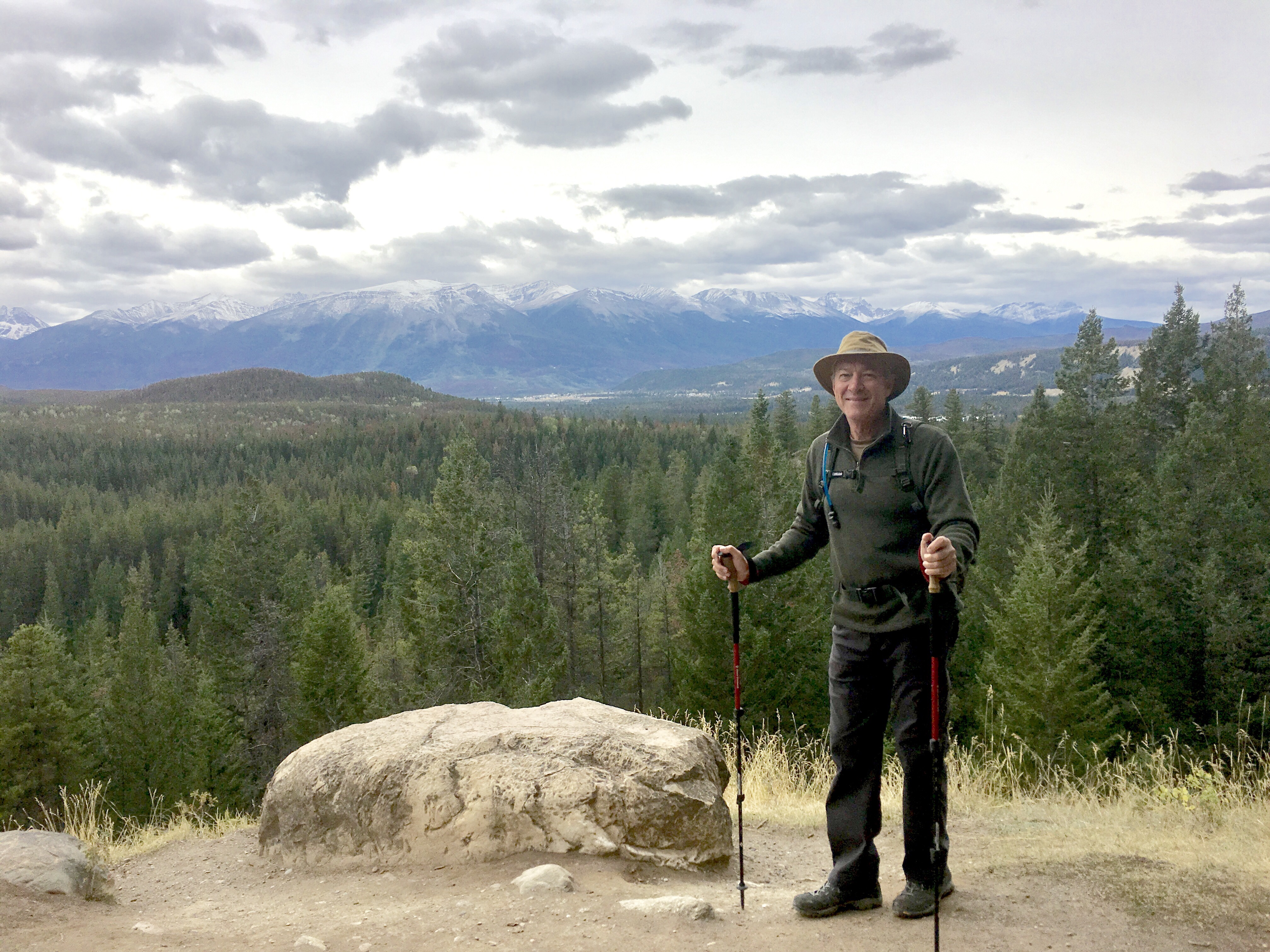 Something else I need to point out in the photo, above. Notice that the hill in the distance to the left is brown. Like most of the hills and mountainsides surrounding Jasper, it was previously covered with Lodgepole Pines, but thousands of acres of Lodgepoles have been killed by the Mountain Pine Beetle, a true scourge throughout Western Canada. Most of the Lodgepole Pines in the campground we are staying in are dead or dying as a result of the beetle. The problem is attributed, in part, to monoculture planting and fire suppression. Sad.

An even shorter hike than our first, but enjoyable: 3 miles with a 700 foot elevation gain.

One thought on “Maligne Canyon”