On Friday, after making a detour into Jasper for fuel, we drove south on the scenic Icefields Parkway (Alberta Hwy 93) about 150 miles to the crossroads at Lake Louise. There’s not much in Lake Louise other than a campground, a 550-room, luxury resort hotel on the lake, a ski resort and some of the BEST HIKING IN THE WORLD! We arrived at the Lake Louise Campground in the early afternoon.

Jasper and Banff National Parks are located in Canada’s Alberta province, but the other two parks that make up the UNESCO Canadian Rocky Mountain World Heritage Site, Yoho and Kootenay, are in the province of British Columbia. While this is probably a distinction without a difference, it does mean that almost our entire time here in the Canadian Rockies was spent in Alberta province. But on Saturday, we decided to drive west into Yoho National Park for a long hike up the Yoho Valley and to see the Takakkaw Falls: Yoho National Park is Canada’s second oldest national park, founded in 1886, and Takakkaw Falls is supposedly Canada’s second highest waterfall with a drop of 1,260 feet. We started with the tourists, making our way from the parking area to the base of the falls a half mile away. People were everywhere! In fact, if you look really closely, you might even be able to see the thrill-seeker in the middle of the photo, above, right at the bottom of the falls, just to the left of where the water disappears behind the rocks. Not liking crowds, we didn’t linger. Leaving the base of the falls where its waters flow into the Yoho River, we hiked upstream. 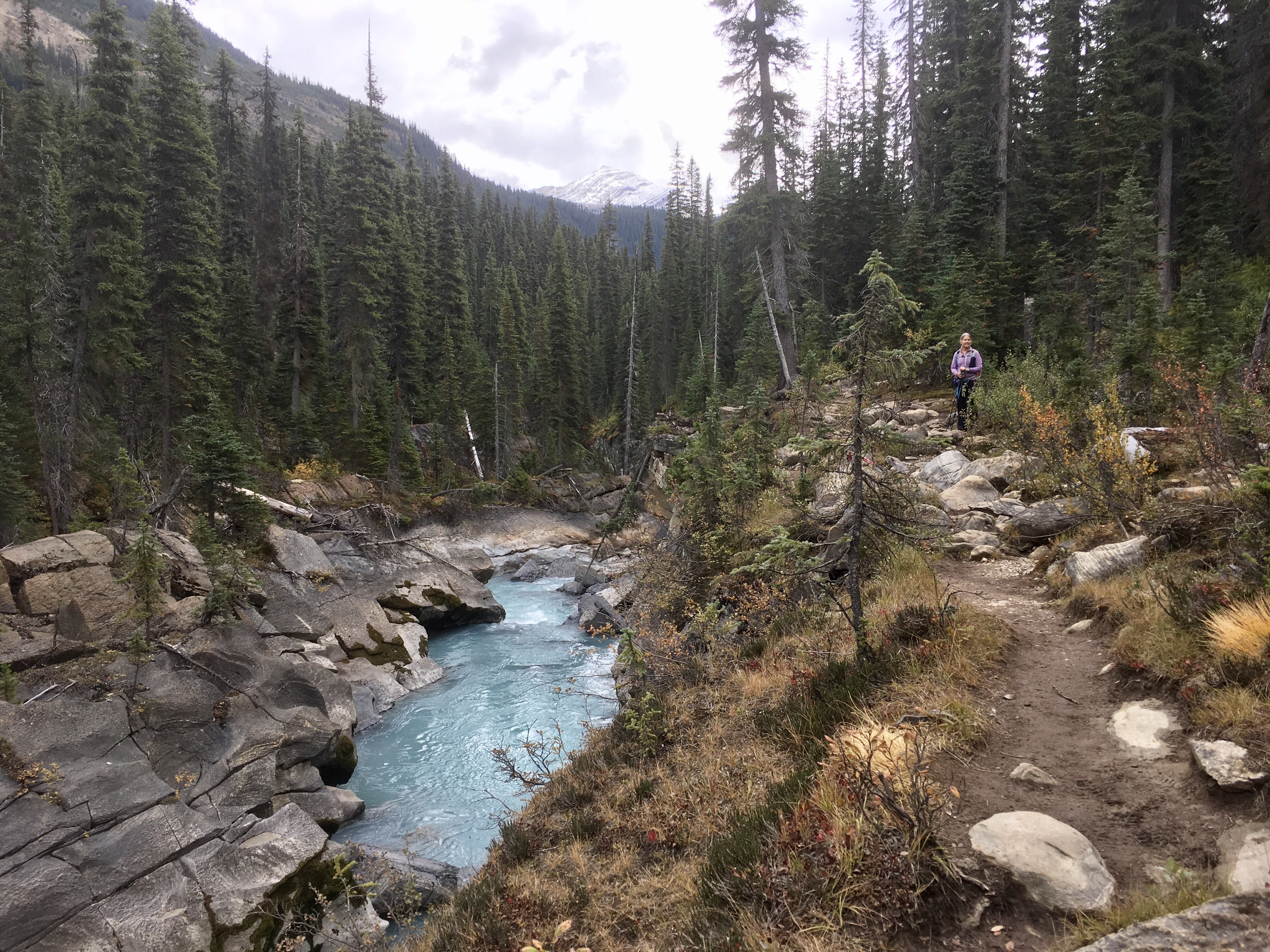 After about 3 miles, the trail left the river and headed uphill for another 3 miles, making its way around Celeste Lake before entering a clearing where the retreat of ancient glaciers had smoothed the plain. At this point, we caught up to a young couple hiking ahead of us:

We followed them across the plain, then up the other side to where the Celeste Lake Trail intersected with the Iceline Trail. The photo below is from the Iceline Trail, looking back at the point we entered the plain from Celeste Lake, the whitish, sandy-looking spot in the middle of the picture:

The Iceline Trail is appropriately named. It meanders through an extensive moraine of till – scattered and crushed boulders and other glacial debris – skirting the base of Emerald Glacier and the President Range of the Canadian Rockies.

We overtook the young couple ahead of us and soon left them behind as we continued across the till, doing our best not to lose the trail in the confusion of debris.

Rounding one large accumulation of till, we could see the glaciers and mountains of the Waputik Range on the other side of the Yoho Valley – the valley, itself, being invisible to us, several thousand feet below:

As we walked, we kept one wary eye on Emerald Glacier, towering above us, lest it calve and bury us:

If you look just above my head in the photo, below, you’ll see Takakkaw Falls way off in the distance. Remember that it is 1,260 in height, yet from where we now stood, it was just a chalk-mark on the opposing panorama.

We hiked under the hovering mass of Emerald Glacier for well over an hour before the trail turned downhill. 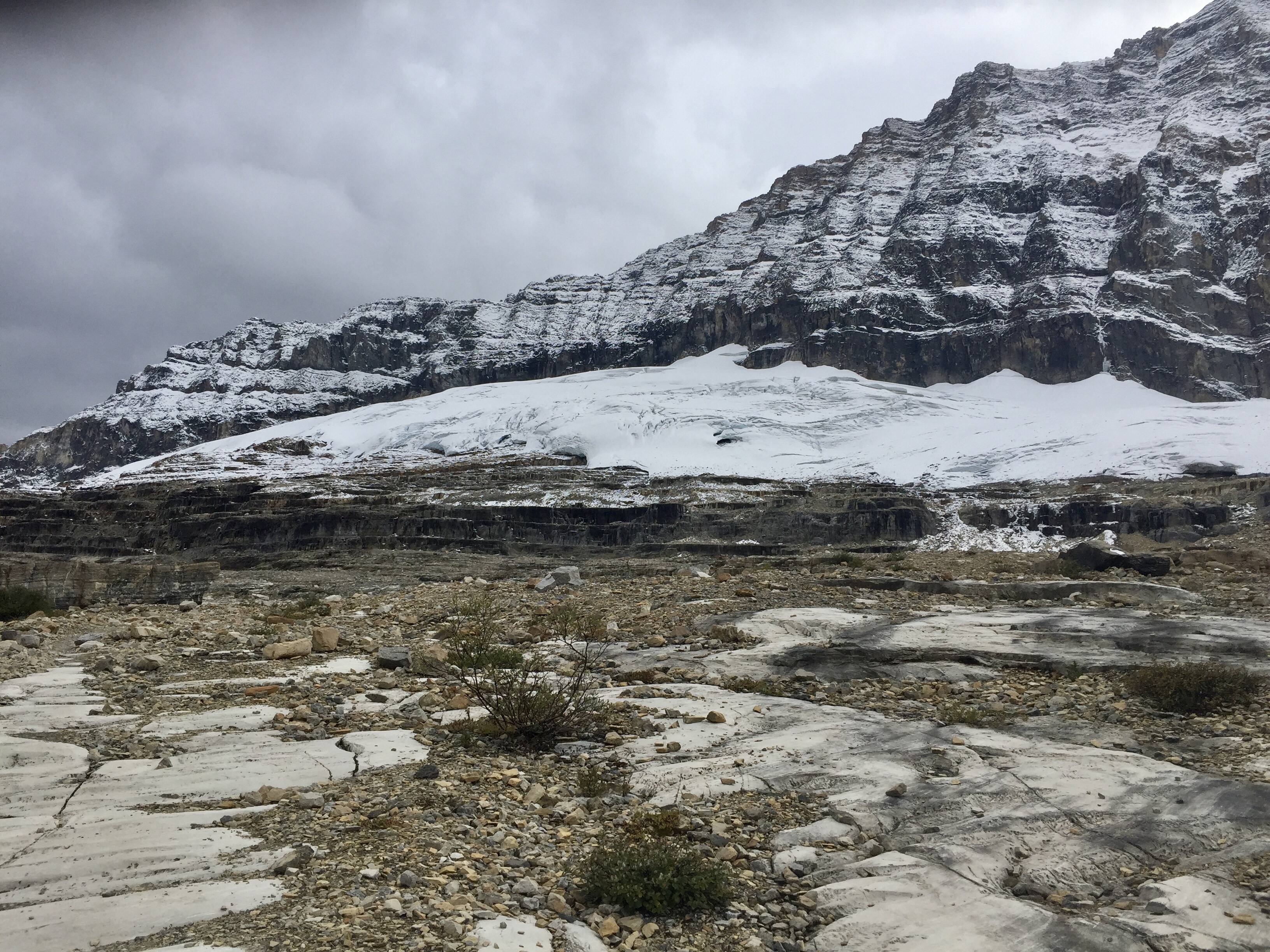 And just before we re-entered the sub-alpine forest, we came upon the only fauna of the hike, a golden mantled ground squirrel:

We had gotten a late start on this hike, so it was nearing dark by the time we made it back down to the base of Takakkaw Falls where we had begun. This hike, with its ever-changing scenery, was an unintended day-hiking record for us: 12 miles with a 2,800 foot elevation gain! One of our favorite hikes of all time.

But the day was not over yet. We still had the drive down the Yoho Valley Road with its handful of tight switchbacks… 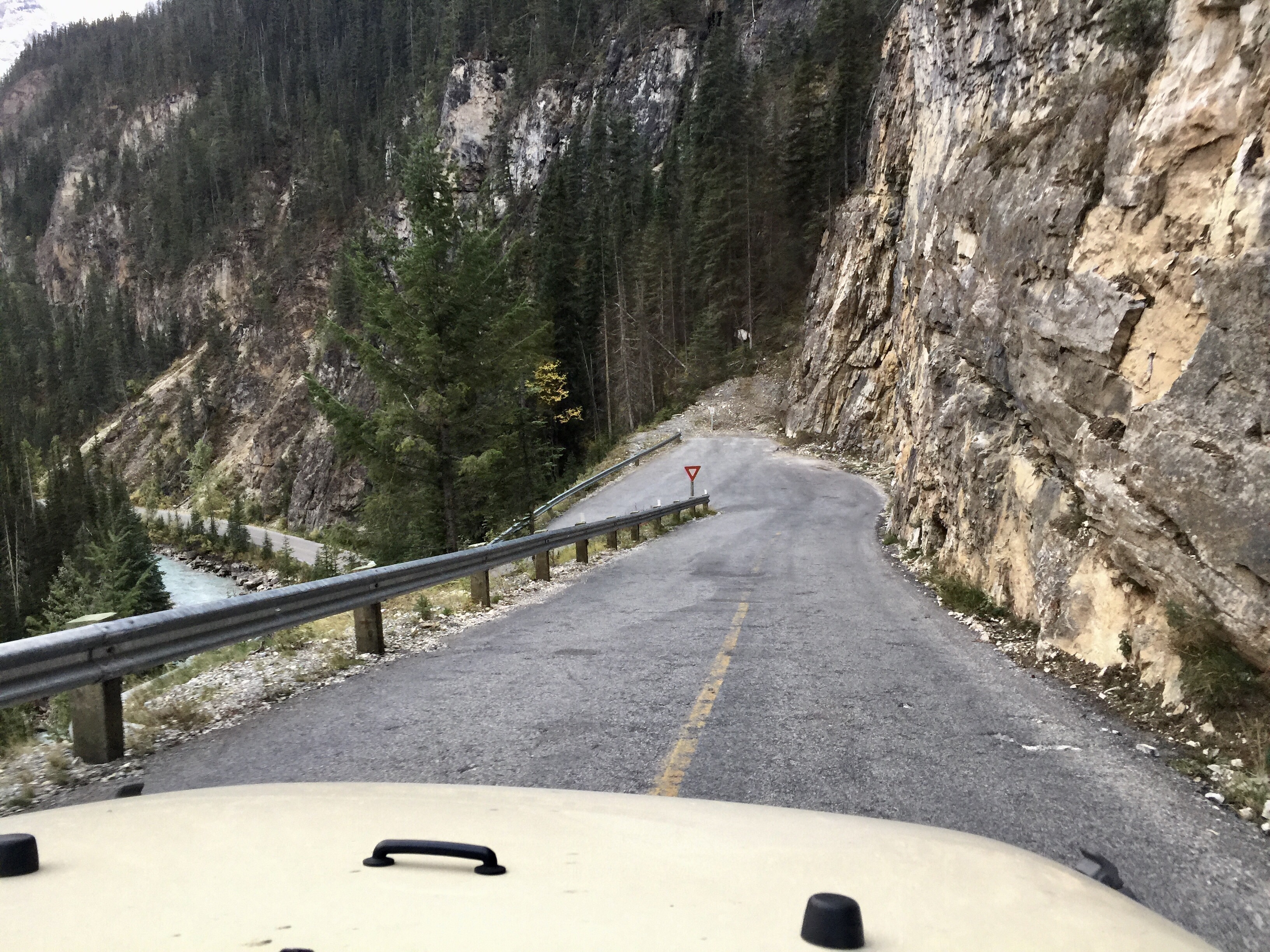 … and then dinner at the end of the road at the Cathedral Mountain Lodge, a fine and welcome ending to a very full day.