I miss Robin Williams. I remember him for three things: the TV show, Mork & Mindy; being the stand-up comedian and entertainer at Gator Growl at the University of Florida’s Homecoming weekend in 1982; and, for his role in the movie, “Good Morning, Vietnam.” I hardly remember the plot, but I’ll never forget his character in that movie opening his radio show with “Goooooooood morning, Vietnam!” And now, here we are, in Saigon, known since the North Vietnamese communist take over in 1975 as Hô Chî Minh City.

It was a cramped, 6-hour flight from Tokyo. Enroute over the East, then South, China Seas, we flew over Taiwan. There were so many ships in the shipping lanes, below (the white lights on the right in the photo, below), it’s easy to see the importance of the area to so many countries. 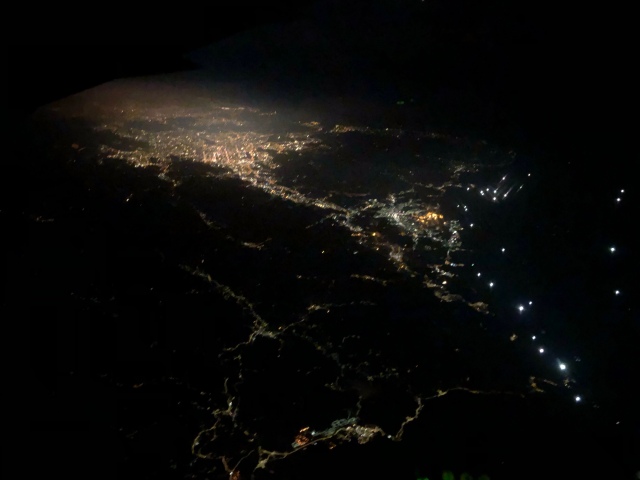 We arrived in Saigon at 10:00pm local time, midnight Tokyo time, checked into our hotel, the Grand Silverland Hotel & Spa, and fell right to sleep. Looking out the front window of the hotel the next morning at breakfast, this was our view, rush-hour in Saigon:

We have now changed from cold weather clothes to tropical attire, much like we do at home when we fly from Washington State to Florida. It was in the 40s and raining in Tokyo, but it’s in the 90s and sunny here in Saigon. Time to wash the cold-weather clothes and put them away in the luggage for the next four weeks.

The view of the buildings across the street from our hotel room is a true montage of Saigon, rich and poor, cleanliness and clutter:

And the motorbike chaos on the street, below, is a precursor of what we’ll be dealing with for the next couple days as we play a real-life game of Frogger here in this city of nearly 9 million.

Today was a day of rest, relaxation and regrouping. We spent the early afternoon at the hotel’s rooftop pool,…

…from which we charted our path for later in the day. First stop, the Bêń Thánh Market.

It’s crazy busy, mostly filled with clothing, shoes, foodstuffs and tourist items. It reminded me of the Nassau Straw Market on steroids. We looked, but didn’t buy anything; we’re holding out for real handicrafts in the countryside later on the trip. 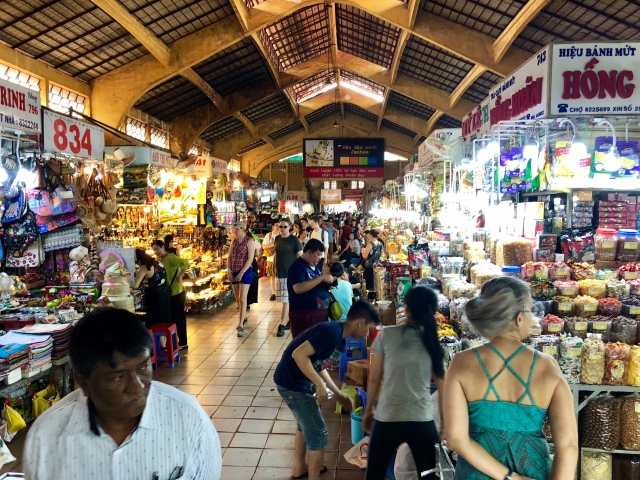 We stopped back at the hotel for High Tea – Vietnamese coffee for me (it’s like a miniature French Press coffee with condensed milk). 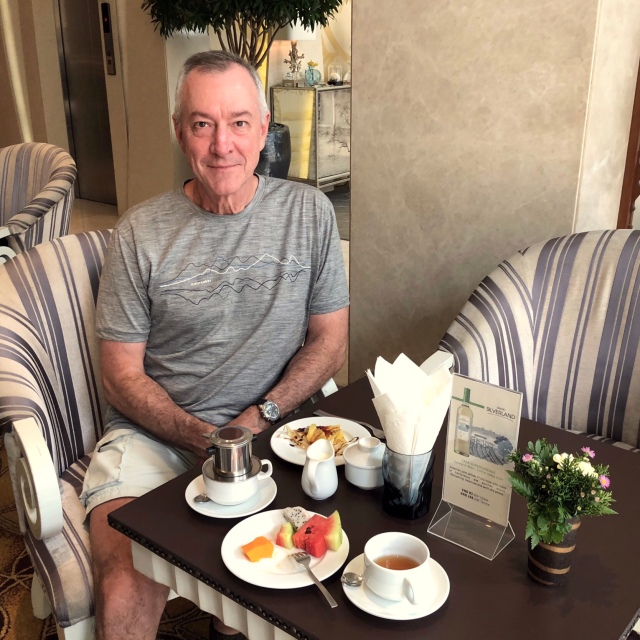 Then back on the street to see the Revolutionary Museum, a/k/a the Hô Chí Minh City Museum, housed in the Gia Long Palace, a French colonial building used as the last residence of the President of the Republic of (South) Vietnam, Ngô Dình Diêm, before he was assassinated on November 2, 1963, in a coup d’etat.

There was an interesting exhibit here for the 50th anniversary of the Viet Cong’s Têt Mâu Thân Offensive (the Tet Offensive) during the Vietnam War (the attack on Saigon began on January 31, 1968, but the entire country-wide operation lasted throughout the Spring and into the Summer).

I’m going to skip the history lesson in this post; there will be plenty of time for that as we visit other important sites in the days to come.