Cars are a luxury in Vietnam. Everyone goes everywhere on a motorbike – scooter, motorcycle, moped, it doesn’t matter, as long as it only has two wheels.

Moms use them to take their kids to school. Dads use them to commute to work. Families use them for general getting around and it’s not uncommon to see dad, mom, and 2 or 3 kids on a single motorbike!

Students use them to get to school and go out with friends. By the way, the legal age for driving is 18 and helmets are required, although the efficacy of some of the helmets is questionable – I’ve seen everything from army helmets to bike helmets.

Nearly everyone wears a face mask for city driving.

In addition to face masks, many girls and women cover every part of their bodies. I thought that this was some cultural thing or to avoid scrapes in case of a fall, but Loc tells me it’s because the Vietnamese prize light, fair skin, so the females cover up to avoid sun exposure. It can be a little excessive, especially since it is normally in the mid-to-high 80s with 100% humidity.

Nearly anything can be transported by motorbike and many motorbikes are designed specifically for making deliveries. 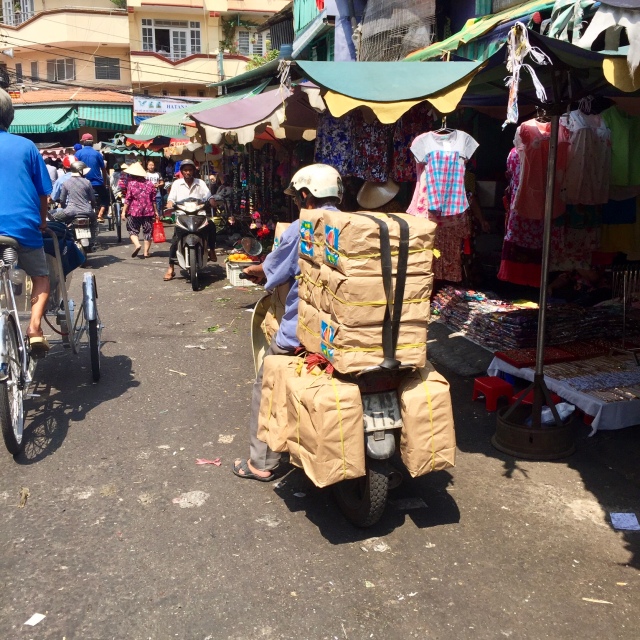 The delivery guys seem to constantly push the limit. I’ve been told that it’s even crazier outside the city where people have even been known to carry livestock on their motorbikes!

There are curbside mechanics and 20-gallon plastic jug “gas stations” and you can accessorize to your heart’s content. Just look at this assortment of customized shocks. 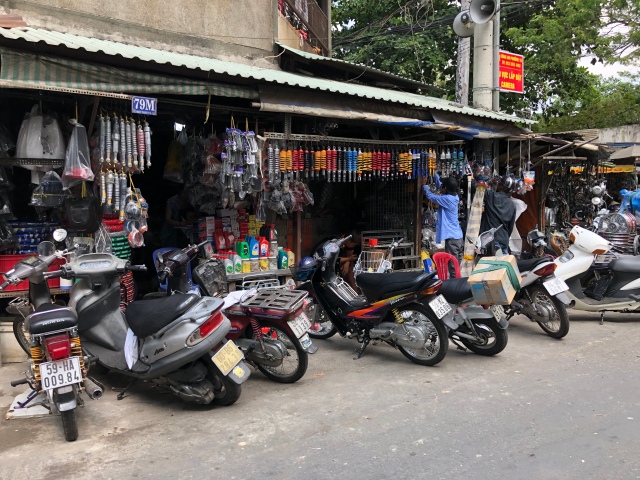 To the untrained Western eye, there are no rules of the road, other than the fact that right-of-way is yielded to the vehicle with the most wheels. Here’s a typical view out the windshield of the van we’re now being shuttled around town in.

People here have amazing balance on their motorbikes and it doesn’t seem to bother them to load up with a high center of gravity, like the guy with the refrigerator-size box on the back of his seat, below. I’m told that riding a motorbike is second nature to these folks since nearly all of them have one from the time they are old enough to drive.

Notice the driver in the green jacket and helmet, above, That’s a “Grab,” kind of like an Uber for motorbikes, in this case with a paying passenger on the back of the seat. Grab is cheap and pervasive.

On St. Patrick’s Day, we were all supposed to go out for a night on the town on motorbikes, chauffeured by local university students. Unfortunately, Dale and I had “Uncle Ho’s Revenge” and couldn’t leave the hotel (if you catch my drift), so we didn’t go, but the rest of our group did. Here they are: 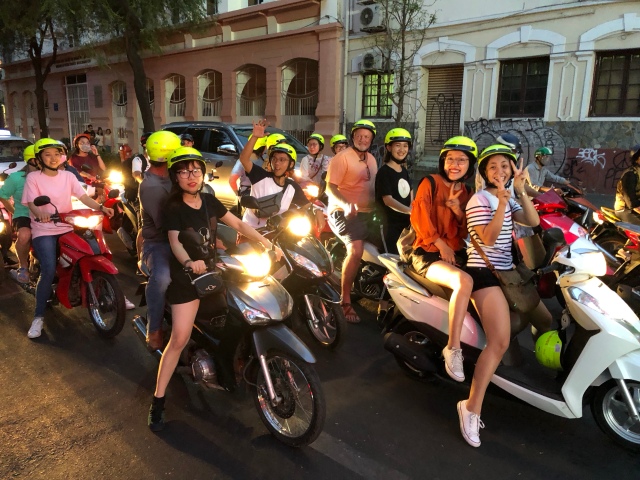 Looks like a good time was had by all.