The city of Takayama is located in Gifu Prefecture in Japan’s Northern Alps, a little less than 200 miles WNW of Tokyo, although by going to Nagoya first we traveled a little over 300 miles by train to get here. Takayama’s sister city in the USA is Denver, Colorado, but it should be Jacksonville, Florida. Like Jacksonville, Takayama has expanded its municipal borders over the years to the point that it is now the largest city in Japan by land area (Jacksonville is the largest in the Continental United States).

For us, Takayama has a familiar feel to it with its old downtown, limited building height and population of around 90,000, just like Bellingham, Washington. The weather and vegetation are also similar to the Pacific Northwest, including the cherry trees that are in full bloom now.

The train station lies nearly in the center of Takayama and the railroad, which runs north/south here, divides the city nearly in half with modern Takayama lying mostly to the west. The eastern side of town is further divided by the Mayagawa River which parallels the railroad – the historic old town, castle ruins and temple district are all in this easternmost side.

We are staying east of the river near the temple district about a 20-minute walk from the train station. I mentioned in my last post that we are in a B&B that is next to a public bath-house; I’ve labeled it on the map, below, by its local name, Takanoyu Sento. The map, by the way, is oriented with North to the left and East at the top. The green buildings are temples and shrines; the orange areas are the historic old town. 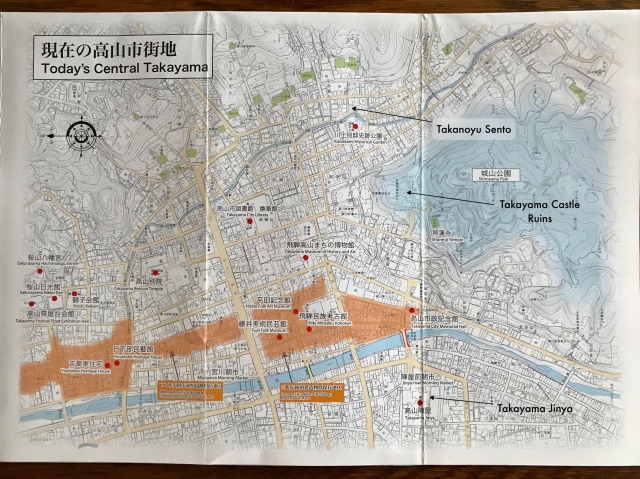 At the bottom of the above map I’ve labeled the old government building known as the Takayama Jinya, originally constructed in the 1690s. It was used as a courthouse, tax office and rice warehouse, rice being the currency for tax payment. It is now a National Historic Site. It was our first stop on this Thursday morning:

One of Takayama Jinya’s claims to fame is its 49-tatami mat conference room, shown below. By comparison, our bedroom at Takanoyu is 8.5 tatami mats in area.

There’s a very scenic red bridge crossing the Mayagawa River near the Takayama Jinya, lined with cherry trees. There are two daily markets in town, one on the plaza of the Jinya and the other downstream along the riverbank.

We strolled through the old town, an historic preservation district maintained just as it was in the 1800s. The two big cedar balls hanging under the eves in the photo below each signify the location of a sake distillery, opposite each other on this street. 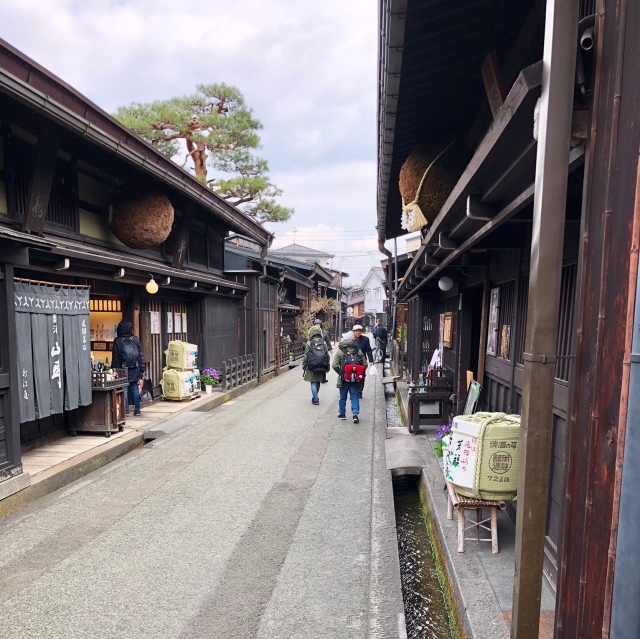 The streets in town are all lined with storm drains, usually covered in the inhabited neighborhoods, but mostly open in the old town, as you can see in the photo above. The old merchant buildings and residences were interesting and most of them are still in use as retail stores and restaurants, although the wares they sell are of course quite different today. One shop just sold chopsticks! Here’s a small sample of the variety they had on display:

We had an early lunch of cold soba noodles just down the street after watching these buckwheat noodles being made. 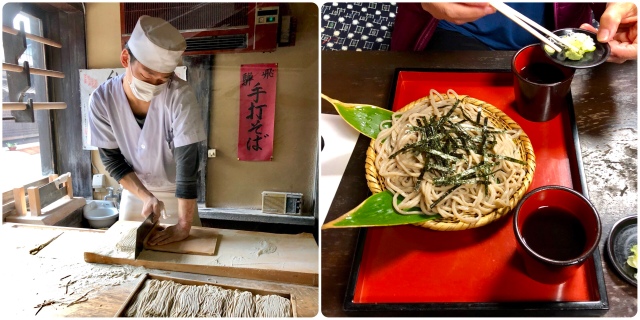 Our plan had been to hike the Higashiyama Walking Course after lunch, a 2 to 3 mile path (depending on which route you take) through the temples and shrines that line the eastern edge of town and then up and around Shiroyama Park, the site of the Takayama Castle ruins. Somehow, we missed a turn and consequently didn’t see most of the old temples and shrines, exploring, instead, the Nishikiyama-jinja, a more modern Shinto shrine, guarded by traditional Komainu, lion-dogs, nestled among the cedars.

Shinto shrines are believed to house the Kami, the local deity, normally an element or force of nature, but occasionally a deceased individual or entire clan. I took a course on world religions in college and we briefly studied Shinto, the traditional religion of Japan, the principles of which I’ve mostly now forgotten, but I plan to read up on it before we get to Kyoto where the shrines are more numerous and impressive.

We explored the complex,…

… stopping to take a picture of the gate and Komainu with the town below and Shiroyama – Castle Mountain – off in the distance:

We continued on this leg of the Higashiyama Walking Course, passing through the Dairyuji Temple and graveyard on our ascent up Shiroyama.

We passed several stone monuments and small shrines, like this one, apparently dedicated to the Kami of “See No Evil, Hear No Evil, Speak No Evil,” the unifying principle of all religions. 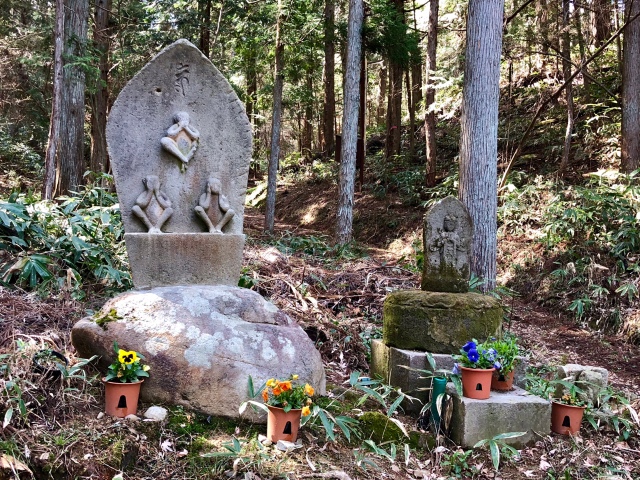 Shiroyama is probably a modern name for this hill that overlooks Takayama. It means “Castle Mountain” and at the end of the 16th Century, the entire hilltop was encased within castle walls. Here’s a brief history from the Higashiyama Walking Course Guide:

The history of modern Takayama dates back to 1586 when Nagachika Kanamori, a feudal lord, took control of the Hida region. In 1588, Kanamori started to complete the construction of Takayama Castle and the infrastructure of the castle town it protected. The higher ground around the castle was designated as a residential area for the samurai and the lower ground, now the Old Private Houses, was for the merchant housing. In the eastern hills, now the Higashiyama Temple Area, the temples and shrines were built or relocated from other places. Kanamori also built and maintained the roads which stretch from the castle town to all four cardinal directions and made Takayama the political and economical center of the Hida region. By Kanamori’s efforts, the foundation of today’s Takayama was established. 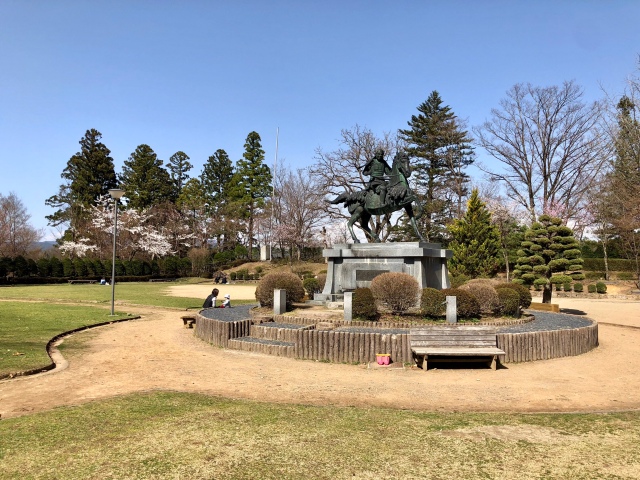 … where you can see modern Takayama off to the west. 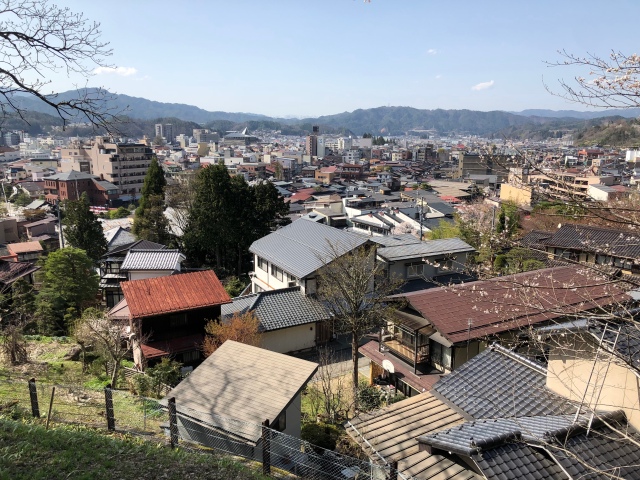 We wound our way downhill, then went back to the B&B. While Dale rested, I walked back through the old town, then to the train station and back to get Dale for the completion of our circumnavigation of Takayama.

We walked north to the Takayama Matsuri Yatai Kaikan, the Festival Float Exhibition Hall where the town stores several of the “floats” that are used in the Spring and Autumn Festivals. The floats in the Exhibition Hall right now are used in the Autumn Festival. If the weather holds up, the Spring Festival will take place this weekend, April 14-15, and I’ll have more to say about the floats then.

Just past the Exhibition Hall, we briefly visited the Sakurayama Hachiman Shrine before heading back to relax in the baths at Takanoyu Sento.