Another late start, we left Smithers around 10:00 a.m. after stopping to fuel up. Diesel in Canada costs about CAD$5.00/gal, but the favorable exchange rate between the US$ and the CAD$ (1.00:1.32) makes our cost US$4.00/gal, just a little more than what we were paying in Washington State when we left. Of course, fuel is sold by the liter (and the speed limit is in kilometers), so it’s always possible that I’ve made a calculation error and we’re paying out the wazoo for fuel. For now, I’ll content myself with my math.

Back to our journey: Our plan was to drive about 200 miles this third driving day, in hopes of reaching Stewart, BC, in the mid-afternoon. We continued north out of Smithers on Canada Hwy 16, the Yellowhead Highway, to the Hazeltons where the road curves to the west toward Prince Rupert. Off in the distance, the Coast Mountains loomed large. 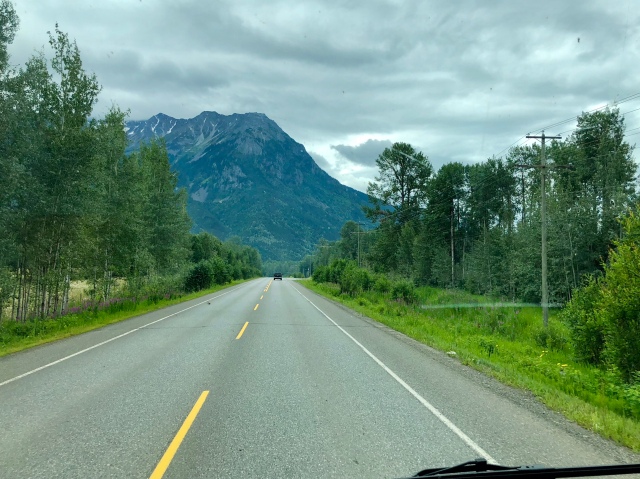 At Kitwanga in the Gitwangak Indian Reservation, we turned north onto BC37, the Cassiar Highway. It’s pretty remote in this area, so I wasn’t surprised to see that fuel prices were 40% higher here; nor was I surprised that we had no cellular reception.

The Cassiar Highway is less developed than the TCH and the Yellowhead Highway. Constructed in the 1970s, it has only been fully paved for a couple years now and there is continual construction underway to improve the bridges and road surface. Not far north of Kitwanga, we crossed this single-lane wooden bridge as construction crews worked on its replacement. 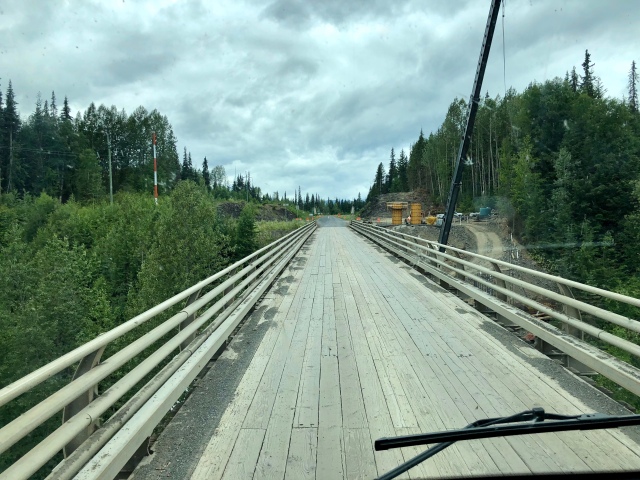 Although the Cassiar Highway is a scenic route, you can’t take your eyes off the road for long due to the fact that is has sub-standard width lanes and no shoulders or passing lanes. Here’s a typical section: 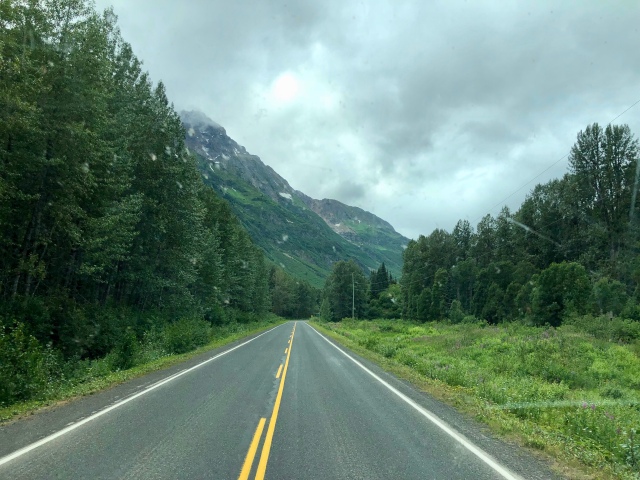 Remember that I commented that the Coast Mountains were to the west? The Cassiar skirts along their eastern flank and at Meziadin Junction, where we turned west onto the Glacier Highway, BC37A, winding our way westward through the river valley toward Stewart, we were treated to a beautiful view of Bear Glacier.

Shortly after we crossed the wooden bridge north of Kitwanga, we had seen a black bear pop its head up along the side of the road, but that hadn’t prepared us for what we saw as we rounded a curve on the Glacier Highway:

We eased ahead as the on-coming rig departed. This black bear seemed oblivious to our presence!

Had Dale wanted to, she could have reached out the window and patted him on the head. I was content to watch him wander off in the rearview mirror. 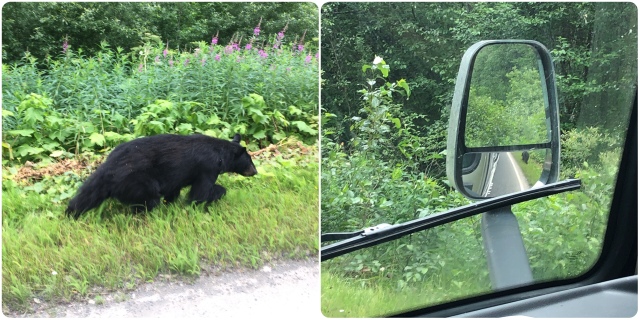