On Good Friday, 1964, the most powerful earthquake in U.S history – and the second most powerful earthquake in recorded world history – ripped right through Valdez, the epicenter of this magnitude 9.2 quake being just 56 miles to the west of town, the result of the Pacific Plate lurching underneath the North American Plate. The earth shook for nearly 5 minutes and in some areas east of the fault the land was thrust upward as much as 38 feet. To the west, the ground subsided 8 feet. The area affected, more than 100,000 square miles, was so vast that it was reported that the Space Needle in Seattle swayed perceptably.

The quake also resulted in the second largest tsunami ever recorded, caused by the general movement of the sea floor and local underwater landslides triggered by the colliding tectonic plates. In Valdez Arm, the inlet upon which the town of Valdez was and is located, the waves reached as high as 220 feet. The waterfront of Valdez was washed away, killing 32 people in Valdez. Amazingly, only a total of 131 people died, primarily due to the low population density in Alaska at the time.

After the event it was determined that the ground underlying the town of Valdez was no longer stable, so the town was relocated four miles to the east and 52 buildings that had survived the quake and tsunami were relocated there, near where we stayed for the four days we were in Valdez. To my eye, the town still looks vulnerable in the event another earthquake of such magnitude strikes the area.

At any rate, Wednesday, August 8, the day before we left rainy and foggy Valdez, we took an all-day cruise on the Valdez Spirit, an 82-foot catamaran built in Bellingham, Washington – our home town – across Prince William Sound to see the Meares Glacier and to look for whales and other sea critters. Here’s what it looked like at 10:00 a.m. as we cast off: 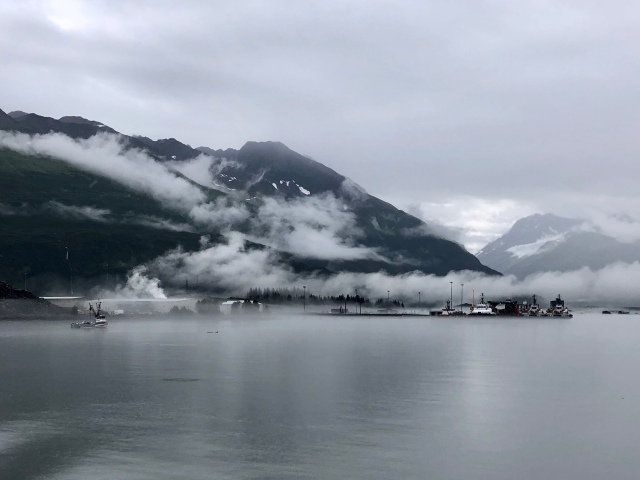 Our captain, Amy, was a one-woman-band: navigator; pilot; tour guide; announcer; and general font of knowledge about all-things-Alaska.

Within minutes of leaving the dock we encountered a raft of sea otters, right in front of the Valdez Marine Terminal, terminus of the Trans-Alaska Pipeline.

I took the photo, below, just as we headed out the Valdez Narrows into Valdez Arm on our way to Prince William Sound.

On one of the buoys marking the eastern edge of the deep water ship channel used by oil tankers heading into and out of Valdez Marine Terminal, there were three sea lions sunning themselves. 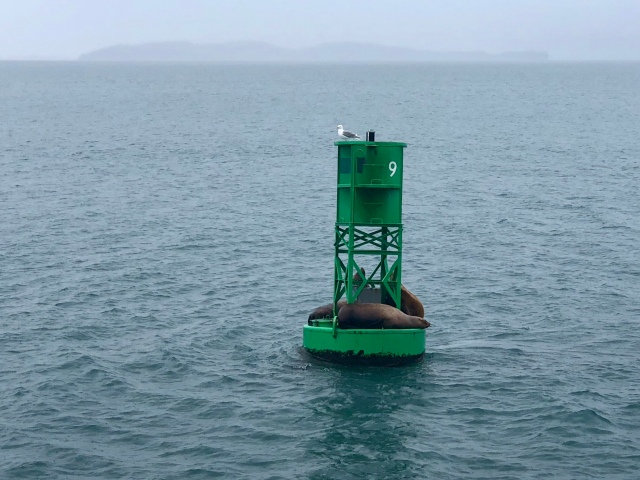 We wound our way around the north side of Glacier Island, continued west, and then slowly made our way north up Unakwik Inlet,…

… surrounded on both sides by the Chugach National Forest.

We sat there, engines off, for about half an hour, watching the glacier calve along its mile-wide face, dropping large and small bergs into the inlet.

At one point, we were encircled by growlers.

Like what we discovered to be the case in Glacier Bay NP – and contrary to popular belief – Meares Glacier is advancing, plowing down the forest on its periphery in the process.

Eventually, Capt. Amy cranked up the engines and we retraced our route south out of Unakwik Inlet. Inside the cabin, we were seated across from a pair of young, female, Korean journalists, one a television producer, the other a newspaper reporter on her way home after covering The Donald for the last two years. It was fascinating getting their impression of America and Americans in the Age of Trump. And we were left speechless when they told us the story of their journey to catch the boat that morning. They had driven all the way from Denali the day before, letting the GPS on their phones navigate for them. The GPS took them onto the Denali Highway, AK8, a graded road through the permafrost and mountains. On the way, they got a flat tire in their rental car. In the middle of nowhere. Outside of cellphone coverage. Fortunately, a passerby stopped and helped them change the tire and they finally got underway again, only to arrive in Valdez too late to check in to their hotel for the night.

They slept nearly the entire boat ride back to Valdez, with the exeption of the sighting of a couple Humpback Whales. They woke up for that.

And they also stayed awake to see the colony of Stellar Sea Lions we passed on the southern shore of Glacier Island a little while later. 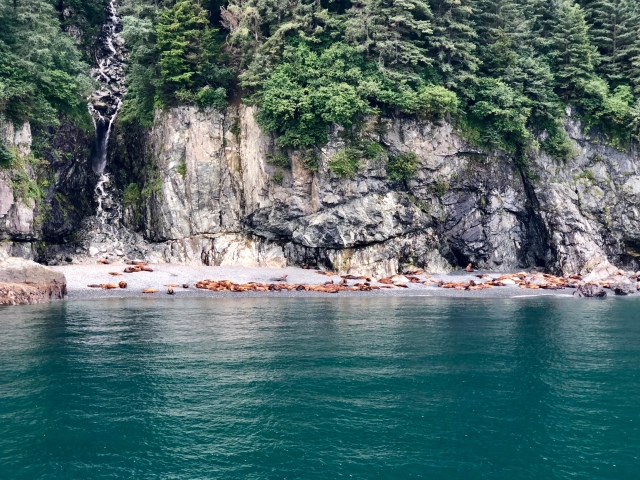 Rounding the eastern end of Glacier Island, we turned north, back up Valdez Arm. Capt. Amy pointed out Bligh Island and Bligh Reef to Starboard, where the Exxon Valdez ran aground, ON GOOD FRIDAY 1989! You can’t make this stuff up. What is it with Good Friday around here?

The grounding of the Exxon Valdez, 25 miles out of port from the Valdez Marine Terminal, was considered at the time to be the worst environmental disaster in America, exceeded since then only by the Deepwater Horizon blowout in 2010 in the Gulf of Mexico.

In an earlier post, I talked about the Trans-Alaska Pipeline. To date, nearly 18 billion barrels of oil have been transported from Prudhoe Bay on the North Face to the Marine Terminal at Valdez and, excluding two acts of vandalism, less than 15,000 barrels have leaked and all spilt oil was contained and has been recovered. That’s a leakage factor of just 0.0000008% – essentially 1 barrel spilt for every 1,250,000 barrels pumped!

When the hull of the Exxon Valdez tore open on Bligh Reef (due to human error), 260,000 barrels of oil spilled out and spread over 1,300 miles of indented Alaskan coastline. Clearly pipelines are a much safer way to transport oil than doing so by sea. And yet, thinking of the Keystone and Dakota Access pipelines, people who depend upon oil for nearly every aspect of their daily life protest this way of bringing crude to market. I don’t get it.

Arriving back at Valdez, we again passed the Valdez Marine Terminal. The fog had mostly burned off and the sea otters had gone, but now we could see the 18 storage tanks on shore, capable of storing a little over 9 million barrels of oil from the North Slope. It’s a secure area, so we weren’t able to visit there, though I would have liked to.

On the map, below, I’ve outlined our route in red. Tomorrow we will be taking the Alaska Marine Highway ferry to Whittier (blue dashed line), then we’ll drive to Cooper Landing in the heart of the Kenai Peninsula, hoping for sunny days.

2 thoughts on “Not Such a Good Friday”