Leaving Seward, we retraced our steps northward on the Seward Highway to its junction with the Sterling Highway which we took west, passing Cooper Landing and Skilak Lake again before crossing the Border Ranges Fault and descending into the Kenai Flats at Sterling. The Sterling Highway continues south along the shoreline of Cook Inlet to its terminus at Homer, the southernmost point of Alaska’s continental highway system.

As far as I can tell, Homer, Alaska, has no history. It first showed up in the U.S. Census in 1920 with 46 people residing in an area designated as “Homer Spit and Vicinity.” That’s still a pretty good description, although the population today is estimated at more than 5,000. It’s a tourist town, plain and simple. Key West of the North. And like most tourist destinations, it’s a beautiful place, in spite of its modern-day trappings: gift shops, bars, restaurants and tour hawkers.

But, who am I to complain? It looks like my kin have been here working the crowds for a while…

… unless, “on the spit” means something other than being located on this four-mile long, narrow gravel bar that’s home to most of the activity in this place, a recessional moraine left by the retreating Harding Icefield glaciers 13,000 years ago. 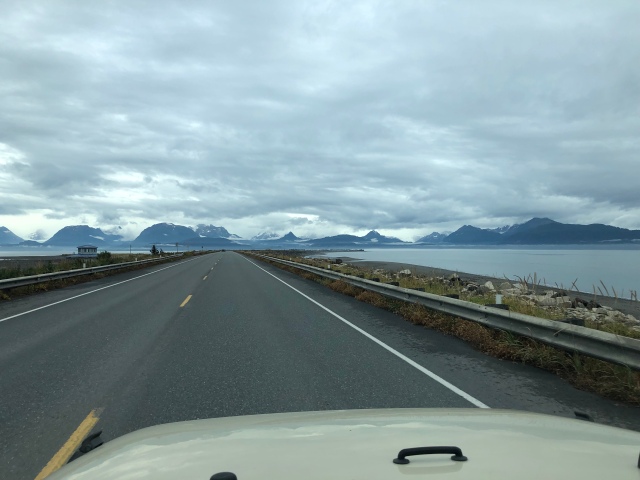 A settlement didn’t really start to grow here until the Sterling Highway was extended south to Homer in 1950, which was overshadowed until then by the larger settlement at Seldovia on the other side of Kachemak Bay which still has no road connection to the larger world. Most of the “historic” buildings in Homer were originally built and located across the Bay in Seldovia and Halibut Cove, disassembled and moved here when the road came to Homer.

Although there was a brief attempt around 1900 to mine the extensive coal deposits nearby, the effort was short-lived and the coal remains in the ground. Commercial fishing became the mainstay of the economy by mid-century, supplemented, if not surpassed, by tourism in more recent years. The economic center of Homer is the marina and docks on the Spit where a fleet of 700 commercial and charter fishing boats tie up and the occasional cruise ship and Alaska Marine Highway Ferry moor.

We are staying at the Heritage RV Park on the Spit, right on the water. There was a small notice on the check-in counter when we arrived that said, “Closing for the Season on September 3.” We’ve noticed that the Fireweed flowers have fully bloomed. Summer is over.

If you ask an Alaskan to name the four seasons, they’ll say, “June, July, August and Winter.” We arrived in Homer on August 19. Need I say more?

Bad weather along the Alaskan coastline generally arrives from the south, a result of the low pressure systems moving west to east across the North Pacific, spinning counter-clockwise, ever-inward, just like the hurricanes and tropical storms of the Atlantic. This works to the benefit of Homer which lies in the rain shadow of the Kenai Mountains. The result is a relatively mild, maritime climate with an average winter temperature just below freezing and only moderate precipitation.

But that doesn’t mean it’s clear skies and sunny days here this time of year. We’ve had nothing but fog and clouds since arriving, which makes it a challenge to “get up and go” in the morning, especially as we near the end-days of our trip. The dreariness does make for some beautiful photographs, though.

The singer/songwriter, Jewel, grew up in here in the 1970s and ’80s, although she left home and moved away when she was just 15. If you listen to her music, you might be able to sense the melancholy a teenager could feel in Homer at the approach of winter.

The forecast for tomorrow, however, looks good, so we’ll be taking a water taxi across the Bay to go hiking in Kachemak Bay State Park. I can use the exercise.