Yesterday was a very busy day for us. Besides going to all the ancient Roman ruins and walking probably 10 miles around the city, we also went to the history and archeology museum, located near the Imperial Baths.

Inside the museum, on the top floor, they had models of all the old Roman structures that we had seen. I thought I’d post pictures of the models so you could get a better understanding of what they might have looked like in ancient times when they were in use.

And here’s the Basilica:

They also had an amazing model of the entire city as it would have appeared in its prime with 80,000 inhabitants.

That’s the Porta Nigra at the bottom.

The big complex on the right is the Basilica and the large, long structure on the left was a chariot race track that has since been lost to development (the Amphitheater sits on a hill above it).

Here’s the Amphitheater in the foreground and the Imperial Baths in the middle of the picture. 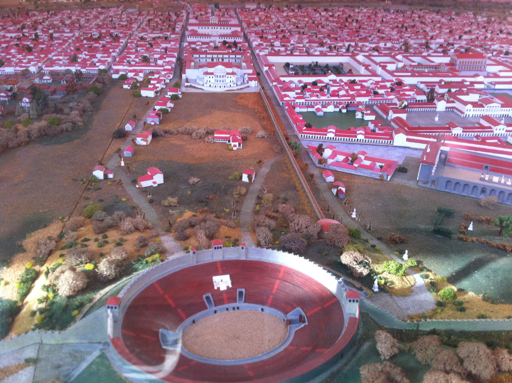