After our horseback ride on Saturday morning, we set out again on our quest to get to Mustafapaşa. But, we didn’t take the detour to Pancarlik Church, so the GPS took us on a different route over and down the hill. 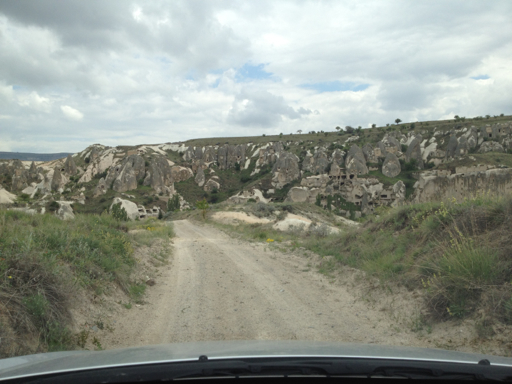 This time, our trail dead-ended at the most amazing rock dwelling we saw in Cappadocia. And there, at the end of the road, was a little tea stand for farmers and backpackers, with three German girls and a Turkish guy that had befriended them and was acting as their guide. The German girls called their guide “Hans” and he called them all “Helga.” The girls told us that’s what the Turks call Germans: Hans and Helga.

Hans (whose real time was Mustafa, like half the Turkish men we’ve met so far on our trip) told us that it was not possible to drive to Mustafapaşa from this side of the cliff, notwithstanding that my GPS said that it was.

We took Hans’ word for it and asked the tea seller if we could leave our car parked by his cart while we hiked to Mustafapaşa. He said that would be okay and then Hans told us we would get lost. It turned out he was right, but not in the way that he thought. The Helgas said that they were all hiking to Mustafapaşa in just a few minutes and that we were welcome to join them and Hans since he knew the way. 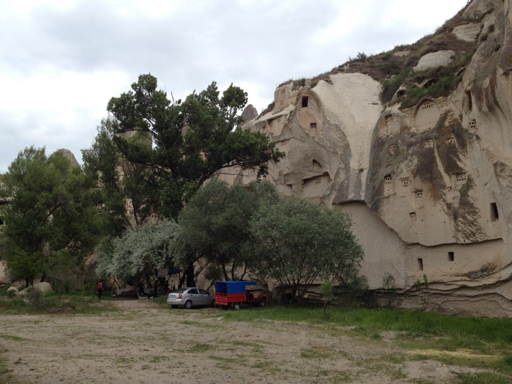 Against my better judgment, we joined them. But first, we all explored the cliff dwellings where the road had ended.

Hans did not know the name of this impressive compound; the tea merchant thought its name was Üzengı. But, today when I looked at the satellite map for where we were, the name “Ibrahimpaşa” appeared at that location, so maybe that’s it. At any rate, nobody knew anything about the history of the place.

Here’s a view from where we left the car: 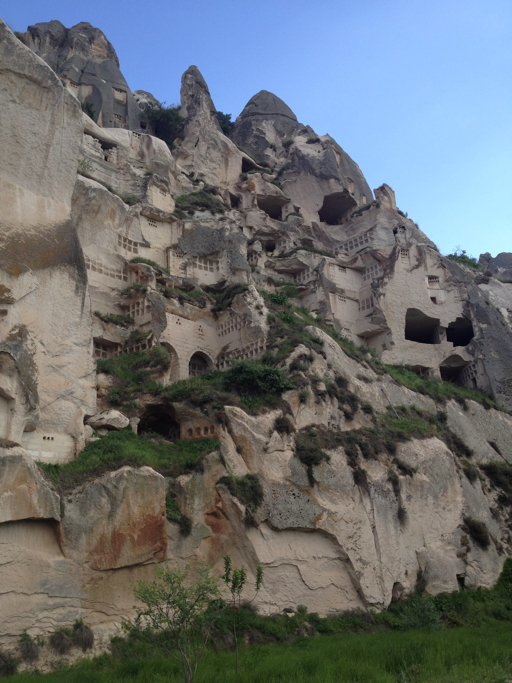 And here’s a view from a little further along the cliff face: 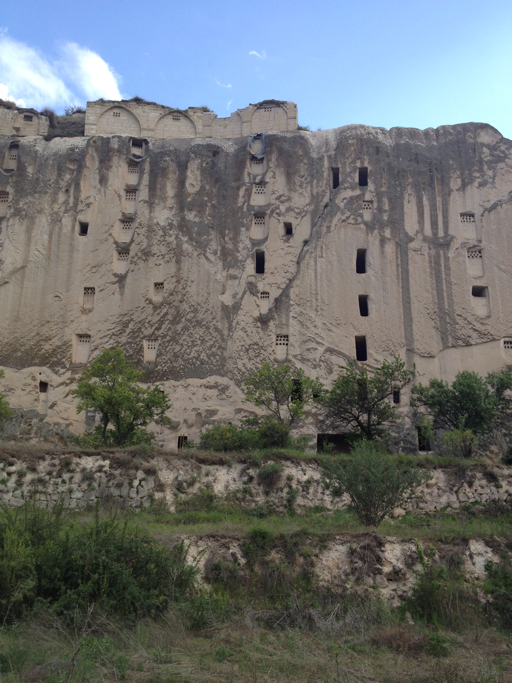 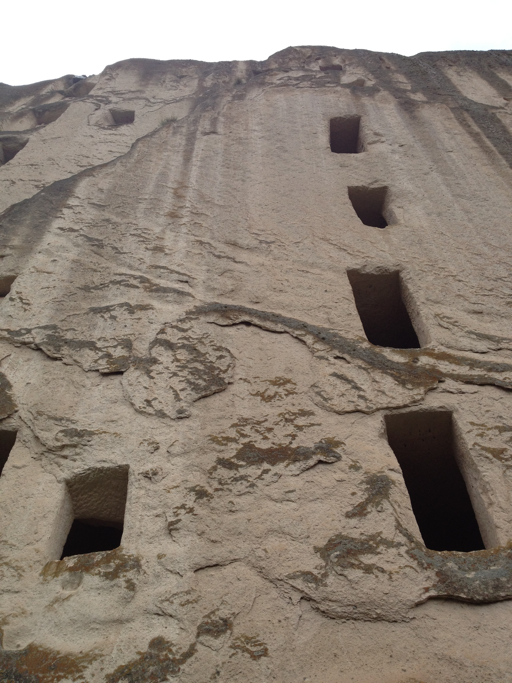 Anyway, just to be on the safe side, I logged our location on my GPS and set it to track us as we hiked along with Hans and the three Helgas. 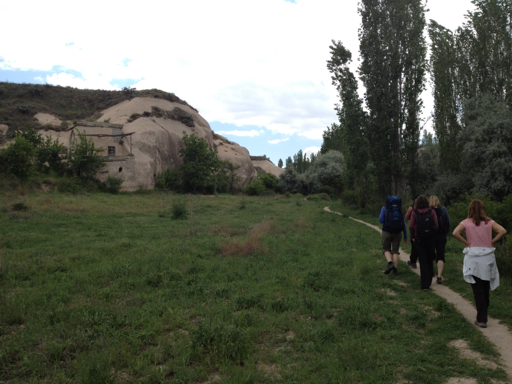 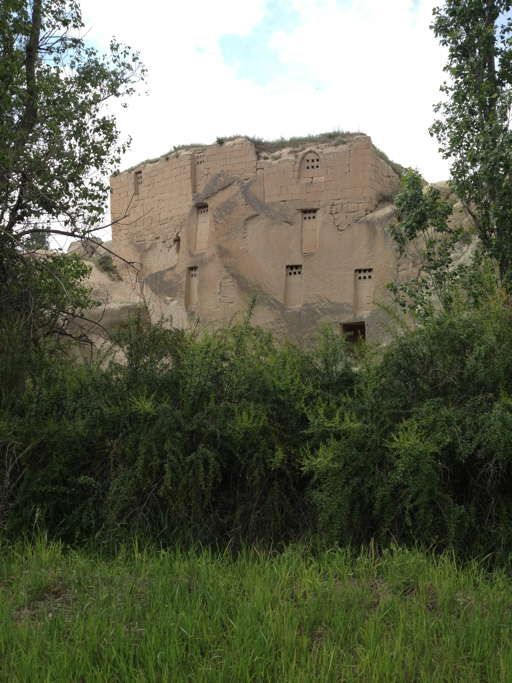 And then we came upon what I’m sure is the most amazing dove cote in all of Cappadocia: 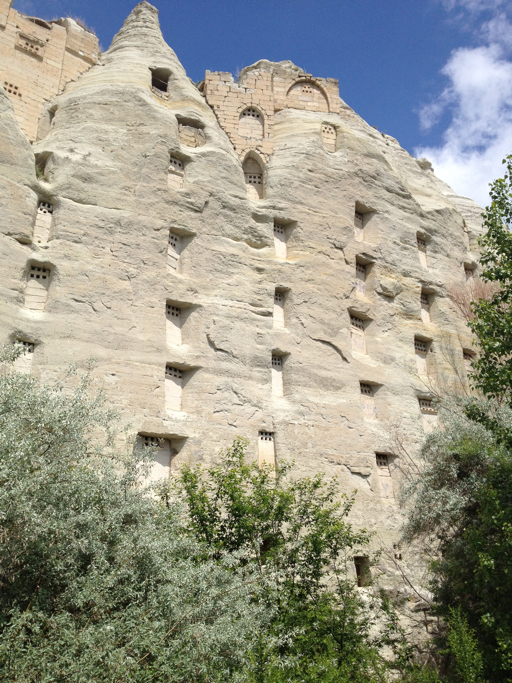 Farmers, it turns out, have been keeping dove safe houses, or dove cotes, for centuries. In return for providing safe and sheltered nesting areas for pigeons (which is what I prefer to call doves), the farmers get a source of feathers, meat and, most importantly, fertilizer from the pigeon droppings that build up. The pigeons also eat insect pests. No wonder we’ve seen so many of these dove cotes throughout the cave communities and churches.

About this time, however, I noticed on my GPS that we appeared to be well off track and I started to watch Mustafa/Hans to see if he really knew what he was doing and where he was going. He didn’t. The further along we went, the further away from Mustafapaşa my GPS said we were getting. But I decided to stick it out with him a little longer – to see which direction he would choose at the next fork.

He soon turned uphill, which is what I had hoped he would do, because that took us back in the direction of where my GPS said we would find Mustafapaşa. Up we went. 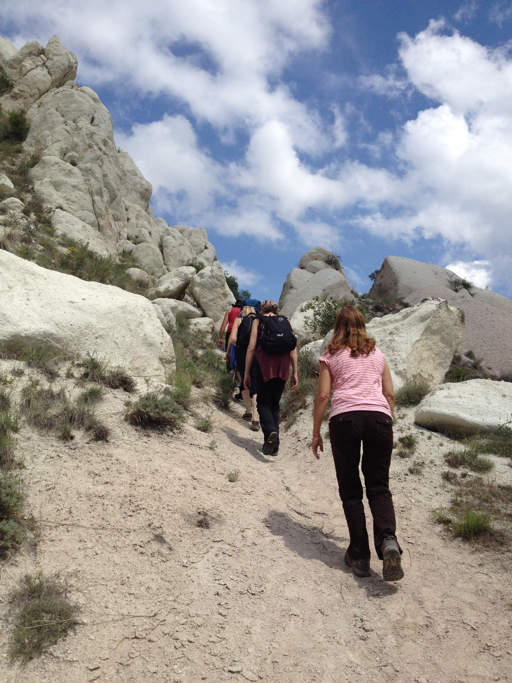 From the top of the cliff, I looked back toward where we had been heading before that last turn upward: 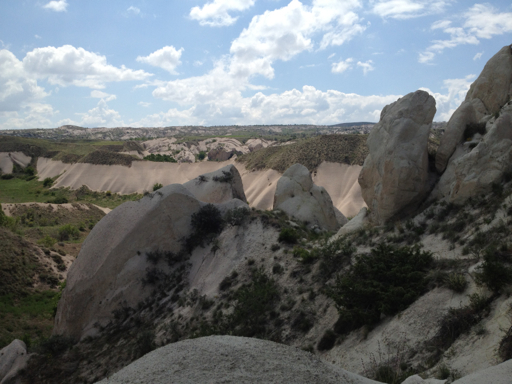 And from the top of the plateau, we saw Mustafapaşa not far ahead. 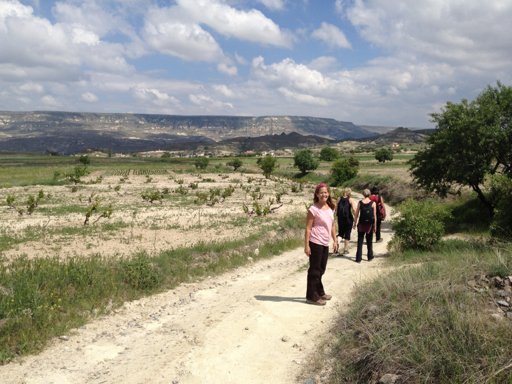 Finally reaching town, we stopped for Hans and the Helgas to fill canteens at one of the village wells. 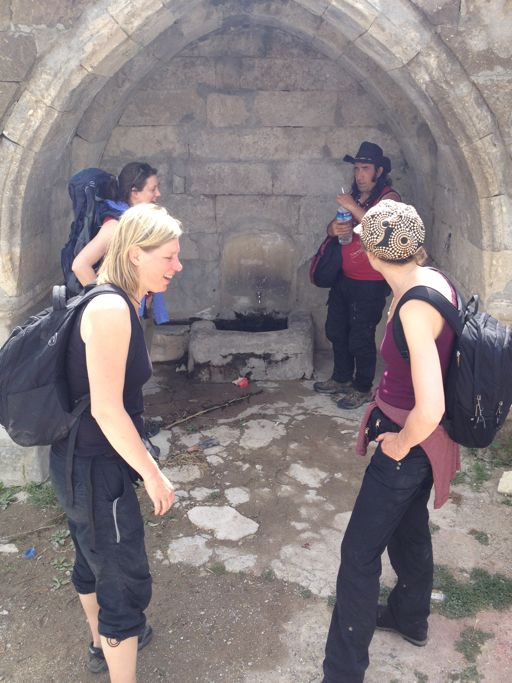 Once in town, we thanked them for letting us tag along, then set off to explore Mustafapaşa on our own.

This village is known for its old “Greek” buildings. Here are a few of them: 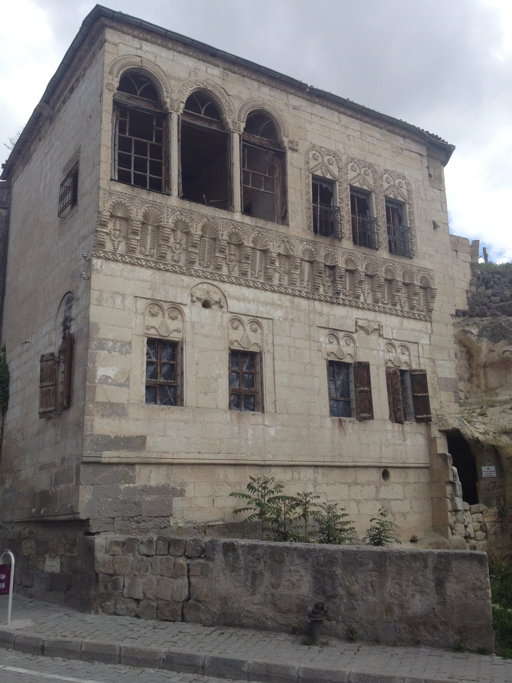 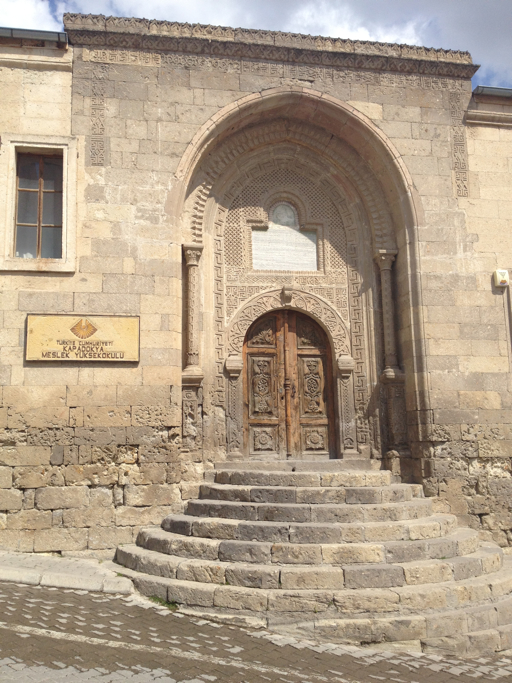 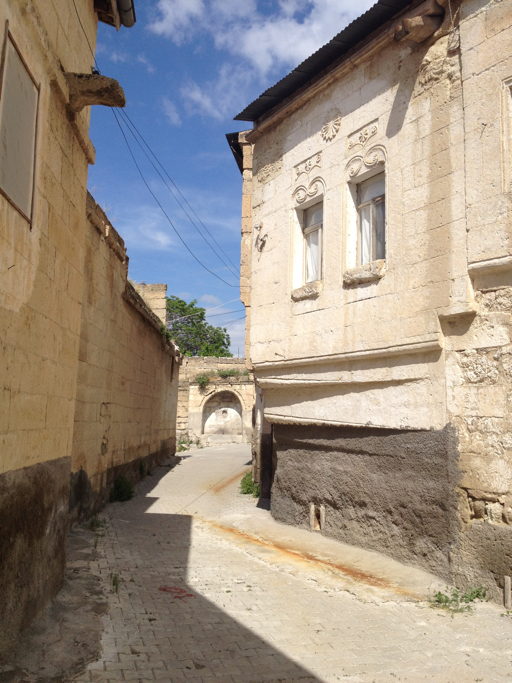 Here’s the Greek church near the village center. 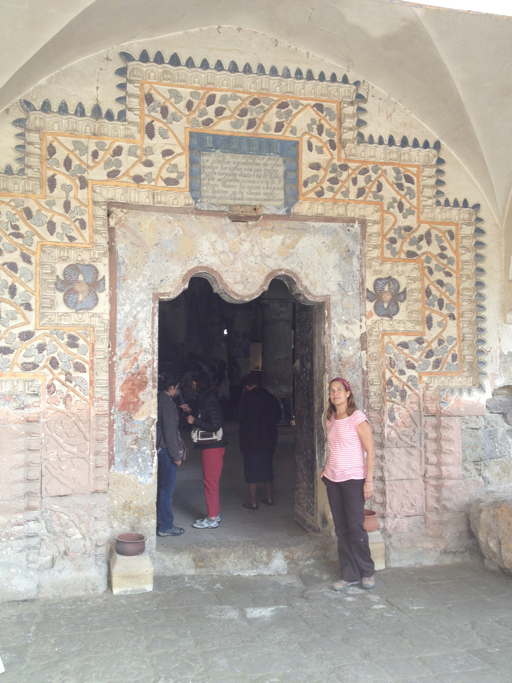 But the town is clearly Muslim now. 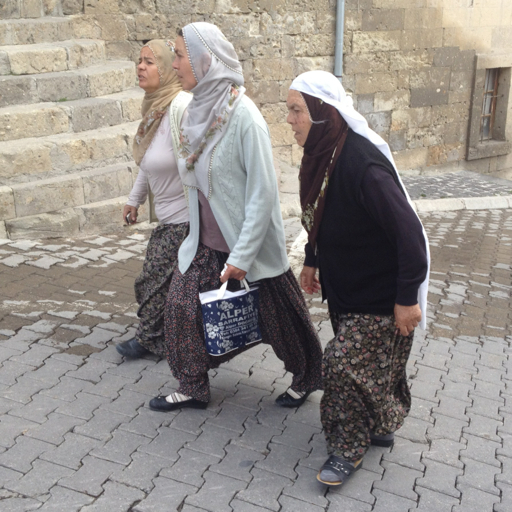 Satisfied, now that we had visited Mustafapaşa, Dale and I set off for our return hike to the car, but we decided to follow the GPS route, rather than try to retrace Mustafa/Hans’ steps. 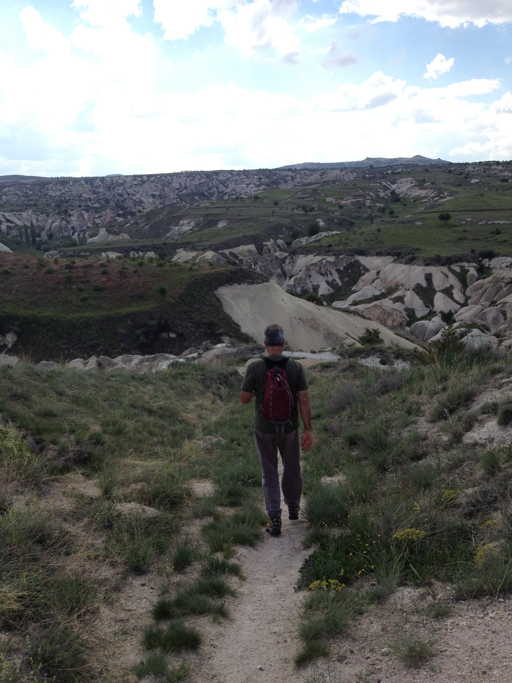 The GPS took us in a much more direct and easy to traverse route, shaving our hiking time from 1.5 hours to just 30 minutes. 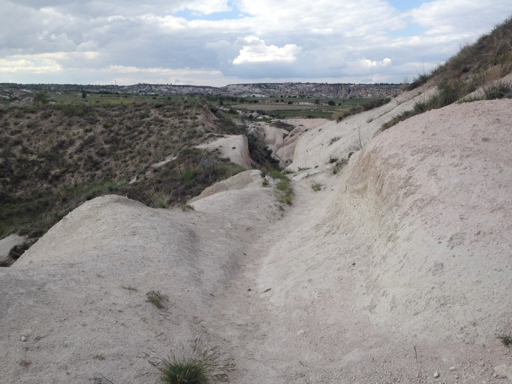 Back to this familiar sight…

…and our friend the tea merchant and our car. 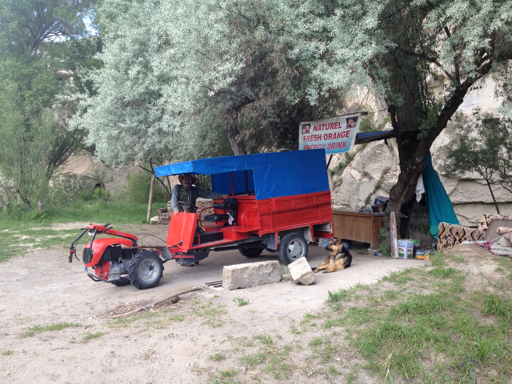