We left Göreme Sunday morning with a destination of Side (pronounced “see day”) on the Mediterranean coast; total driving time, 8 hours. There’s not much to see in the very center of Turkey. It’s pretty much like driving through Kansas or eastern Colorado, but without the corn and wheat. There’s a lot of farm land and it looked like they were growing mainly grasses and grains, but we couldn’t tell exactly what kind.

Our route took us from Göreme to Aksaray to Konya along what was the Silk Road between China and what is Europe today. In ancient Turkey, or Anatolya, the route, originally known as the Persian Royal Road, was first used around 475 B.C. to carry post from Persia to Smyrna, which is modern day Izmir (from where we will leave Turkey in two weeks).

The silk road was used by merchants to transport trade goods from the east to the west, and vice-versa. Along the way, the traders needed secure stopping points to rest and obtain water and supplies for their caravans, so outposts sprang up along the way.

We call such an outpost a caravanserai, the Turks say Karavansaray or Han. The largest caravanserai in Turkey was, and is, the Sultanhani, built in 1229 by the Seljuk Turks and located about 25 miles west of modern-day Aksary. From the outside, it looks like a fortress, complete with watchtowers. 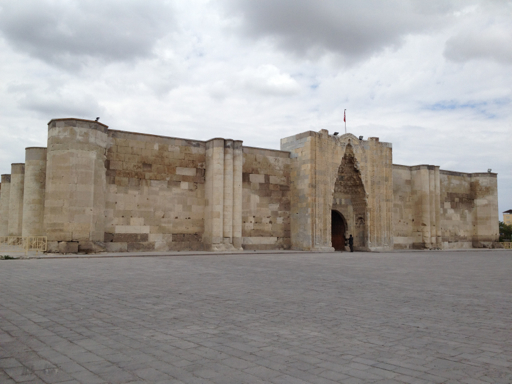 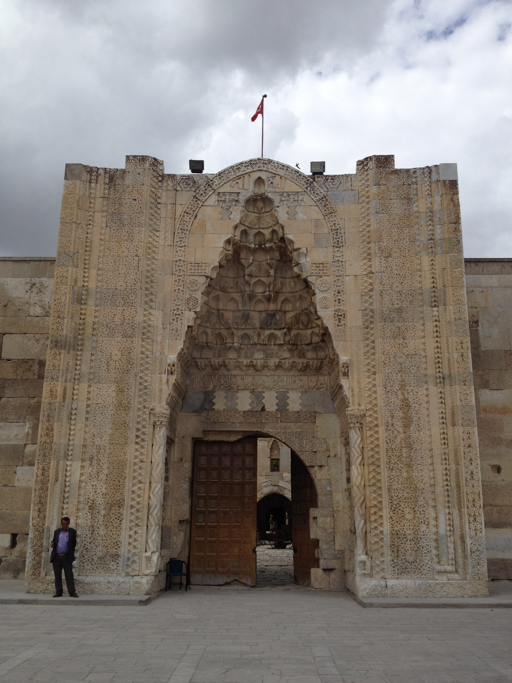 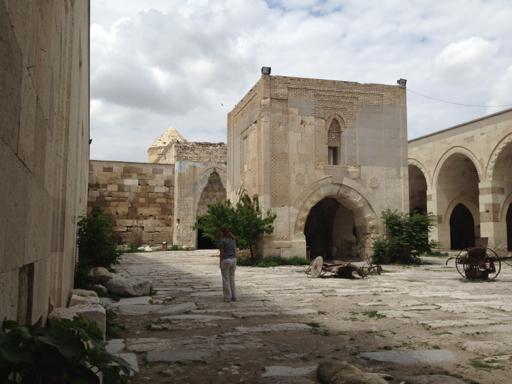 Around the perimeter of the caravanserai are numerous rooms used primarily for lodging, but also for storage or as merchants’ stalls. Since the caravans needed to be secure from marauders, these rooms had very small exterior openings and were, consequently, rather dark. Here’s a view of one of the rooms with the exterior wall at my back and a guard dog at the entry door, sleeping on the job. 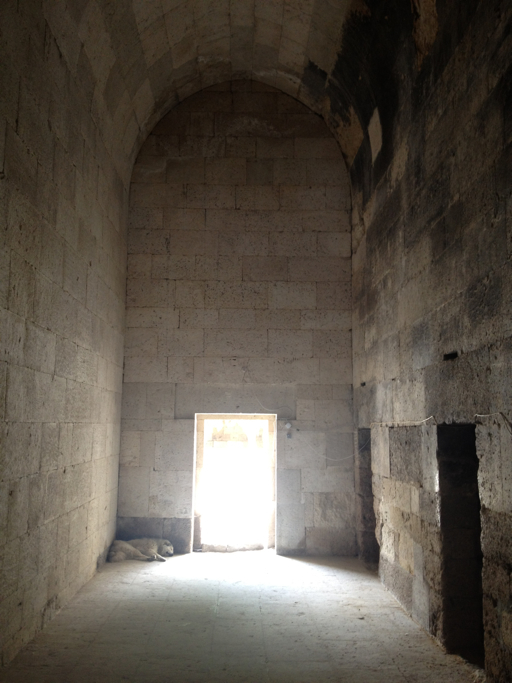 The caravan’s animals, camels and horses, typically, were sometimes kept in the courtyard or the surrounding stalls, but in the case of Sultanhani, there was a separate, huge, attached structure that could also be used for that purpose. 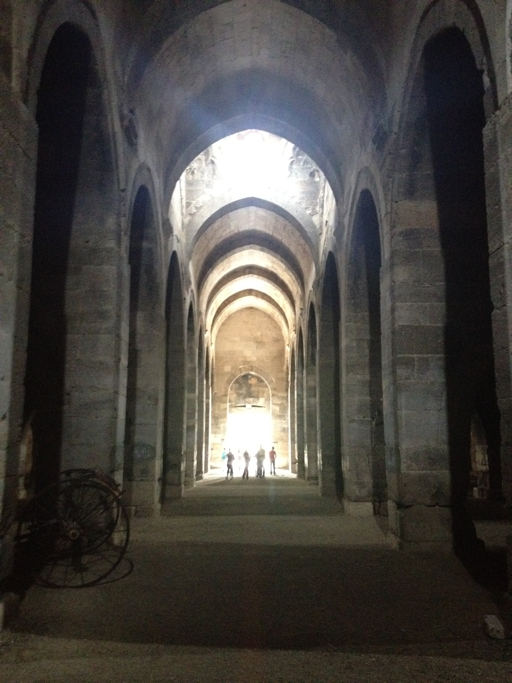 Dale admired the doorway between the main courtyard and the attached structure. It was quite ornate. 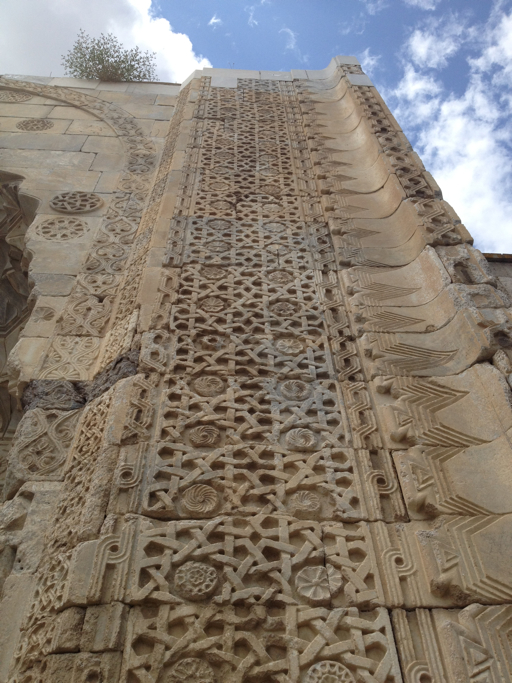 The drive beyond Sultanhani was rather uneventful. We had thought about stopping in Konya to see the Dervish Museum, but it was a busy city, so thought better of it and went on. The road continued west and took us up into the mountains, then turned south toward the Med.

We had been told in Göreme that we should stop to eat at an Et Mangal, a Turkish roadside BBQ. We did. We had lamb (kuzu); it was delicious. Here’s our cook, the lady with the big smile and the inside-out apron (note the slabs of meat hanging in the background). 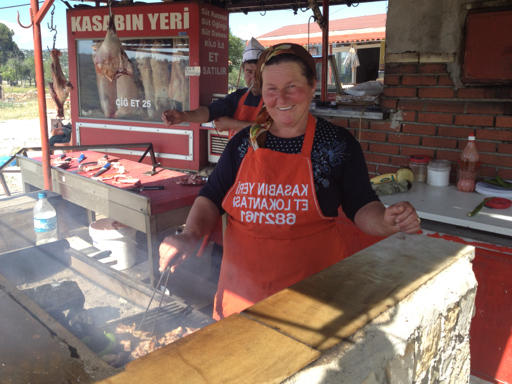 And here’s where we were served by a young boy named, you guessed it: Mustafa. 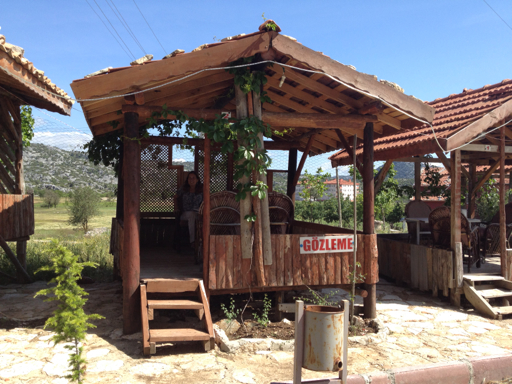 We got into Side around 5:00 p.m. and discovered that the small waterfront hotel we wanted to stay at was on the point on the other side of the walking streets, but we eventually found our way to it. It’s called the Beach House Hotel (not very Turkish sounding). It’s a pretty amazing place, built right into an old Roman palace residence. The wall supporting our room is around 2,000 years old!

Here’s the view from our balcony at sunset: 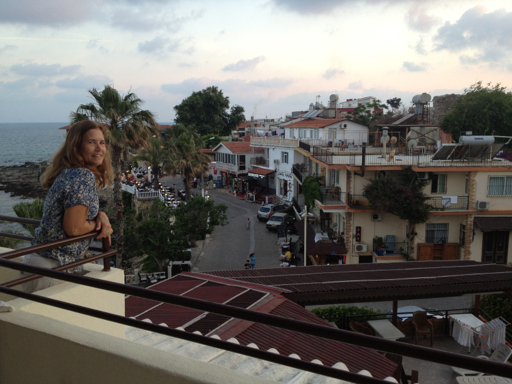 And, just a little to the right, the Roman wall you see is part of our hotel’s courtyard; and, of course, there’s the obligatory mosque and minaret in the distance. 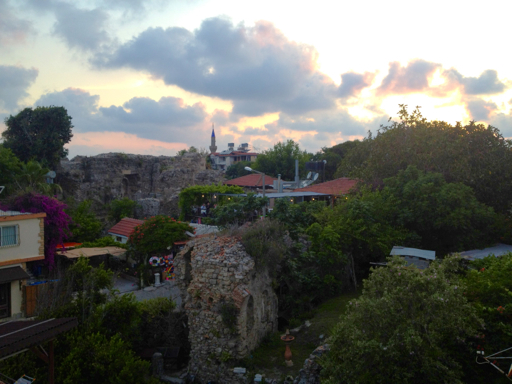 After a good night’s sleep (we didn’t even hear the call to prayer), we had breakfast on the water… 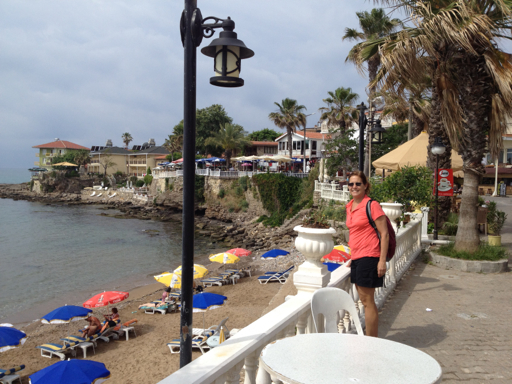 …then had our second cup of coffee in the courtyard amidst the Roman ruins. 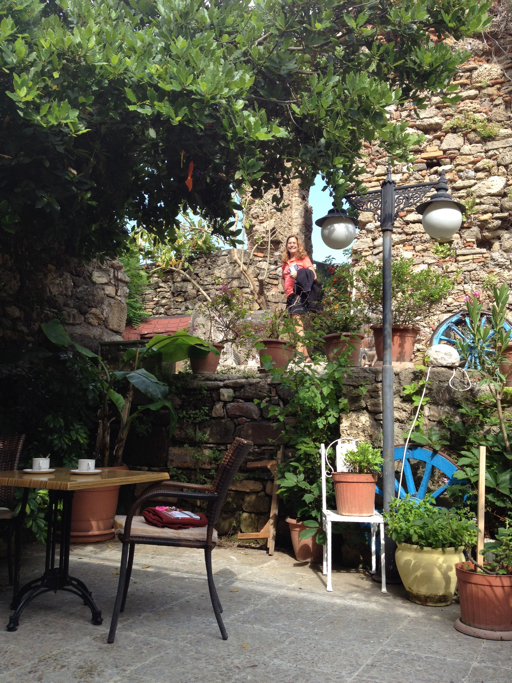 A nice way to start the day.