The peninsular settlement that is modern day Side was first inhabited by Greeks from Cyme around 700 B.C. It was subsequently occupied by Alexander the Great, another Greek, in 333 B.C. and by the Greek island city-state of Rhodes in 190 B.C. So, by the time the Romans came to Side around 75 B.C., the town was already steeped in Greek, or Hellenistic, culture.

Prior to the Roman conquest of Side, the Greeks had built temples to Apollo and Athena near the harbor that had attracted them to the area. Both temples were rectangular and constructed in dimensions of 6 marble columns by 11 marble columns. The Apollo Temple was nearer to the water, but the Athena Temple was slightly larger. Both temples were damaged, but restored by the Romans in the 2nd century A.D. The Apollo Temple was partially reconstructed much more recently in 1980.

In the map, below, you can see the location of the two temples. Our hotel is approximately where the little guy with the camera is standing, above the Ancient City Baths.

Here’s the Apollo Temple which we visited this morning after breakfast. You can see the part that’s been reconstructed on the right, with the broken columns yet to be re-erected still laying on the ground. 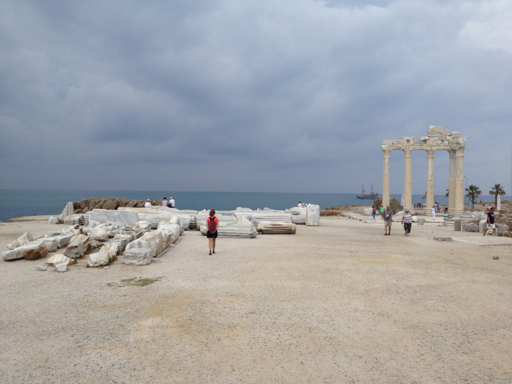 Here’s a part of the upper portion that had not yet been put in place. It’s upside down, but it was a great place to relax for a few minutes.

Landward of the Apollo Temple was the foundation of the Athena Temple, though there wasn’t much to see anymore.

In the 5th century A.D., the Romans built a basilica next to the two Hellenistic temples, but even that is now in ruins.

In this picture you can see the foundation of the Athena Temple in the foreground and the ruins of the Roman basilica in the background.

Turning 90° I looked eastward into what was formerly the Nave of the basilica: 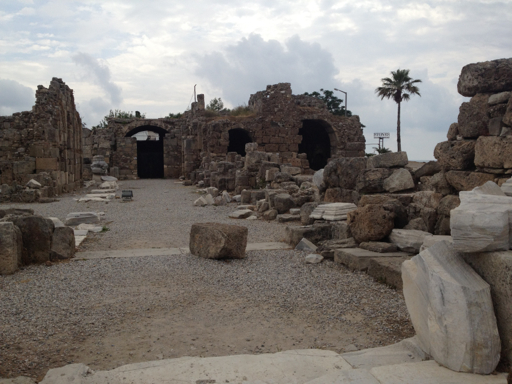 It was interesting to see how the Romans incorporated the earlier Greek structures into their own.

After wandering around these ruins for a while, we walked along the Side waterfront toward the main Roman ruins, the subject of my next post. 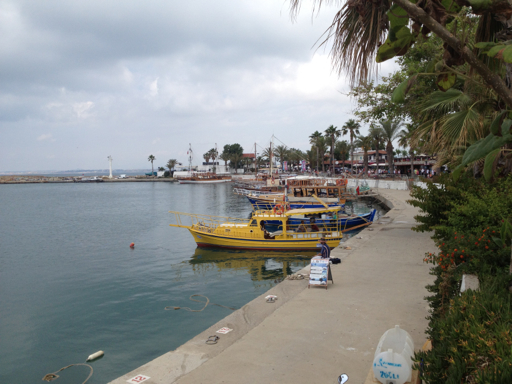