This morning, we left early and drove up into the mountains to the Saklıkent Gorge, discovered as recently as 1986. In Arizona, if dry, Saklıkent would be known as a slot canyon. Supposedly, at 11 miles long, it’s the third longest canyon in Europe, assuming you consider Turkey to be in Europe.

On the way into Fethiye the other day, we saw quite a few small bus tours heading back from the Saklıkent in the afternoon and we wanted to beat the crowds, and we did. When we got there, perhaps only 15 people had started the walk up the gorge ahead of us.

The trek starts at a 300 foot long catwalk bolted into the side of the canyon.

After the catwalk, the canyon opens up slightly where a number of springs gush forth from the canyon walls. Strange: a couple days ago we saw rocks emitting fire; now we’re seeing rocks emitting water. What’s next? Ice cream?

The water from the springs joins the water rushing down the gorge at this point:

There, nailed on a tree, is a sign announcing: “Dikkat!!!” that is, “Beware!!!” Not mincing words, tourists are told to hire one of the local guides.

Ah, but we had read the guidebooks and set forth on our adventure well equipped with waterproof hiking shoes and a waterproof case for my iPhone, wallet and keys. Plus, we’re fit and confident – we didn’t need a guide, even though one was tugging at my sleeve the minute we arrived at this point.

It may not look it in this picture, but the initial crossing is waist-deep. We sat and watched to see how the second group upstream forded the water…

No problem. Off we went.

And it was no problem, at least this part was no problem. But, soon we encountered slick rocks and deep pools. Whoops. Maybe a guide would be a good idea.

So we joined the group and their guide that we had watched cross before us, three couples from Mannheim, Germany. Our Turkish guide graciously accepted us into the tour, even though he was the very guide I had turned down back at the entrance to the gorge.

We made it about a half mile up the gorge…

…to this unique stopping point…

…before turning around where the water was chest-high and heading back downstream.

The water got shallower and the sun came out. It was like a day at the beach. And just about here, the crowds began to appear, coming toward us. 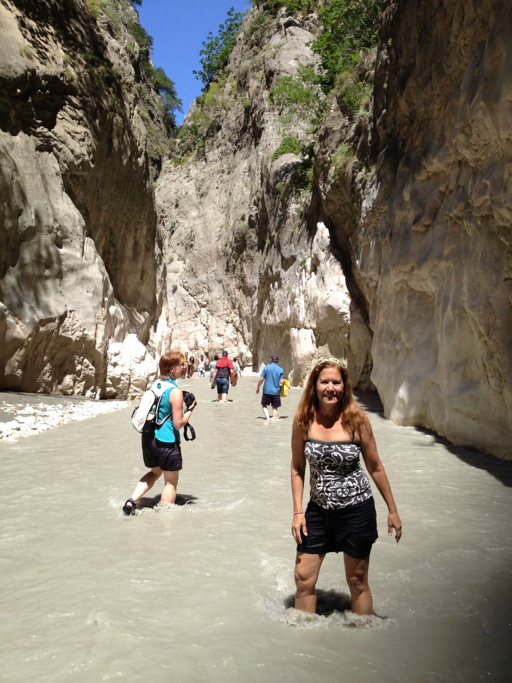 So, we went back to where we started, crossed the river, and had a cup of coffee as we watched the river run. 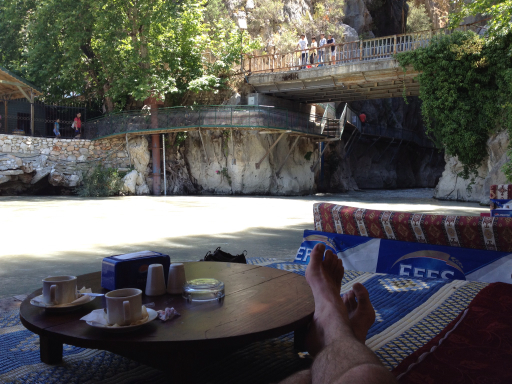 After a while, we took the car and drove further downstream. At one point, we found a hand-pull cable car across the river, but we weren’t brave enough to test it. 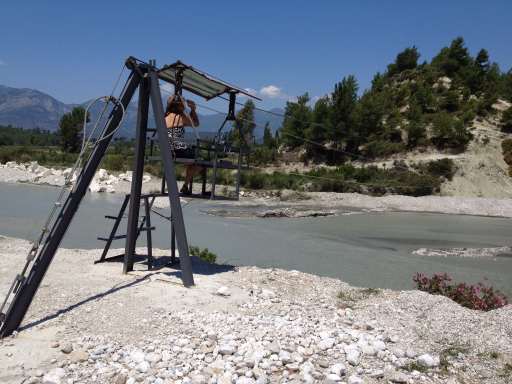 Then we drove back upstream to the gorge on our way to Tlos, another ancient Lycian and Roman city… 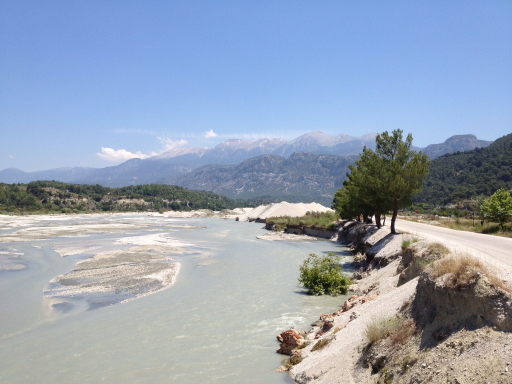 …passing these slowpokes along the way.