We arrived in Selçuk yesterday in the late afternoon. After checking into a nice, small hotel called Nilya, we walked further up Ayasuluk Hill to the ruins of the Basilica of St. John, built in the middle of the 6th century A.D. by Emperor Justinian on top of a former church that had also been built to honor the Apostle John.

Here’s a photo of Selçuk, with Ayasuluk Hill on the left.

In the 7th century, the basilica was encircled by walls to protect the church from muslim invaders. We entered through the southern gate, shown below. We also exited from this gate an hour later, where we were approached by a middle-aged man who claimed he was a “digger” in the excavations of the church and that he had found old Roman coins that he wanted to sell us. Uh, huh. Sure.

Inside the compound, the first thing that hits you is the Ottoman fort sitting at the top of Ayasuluk Hill.

The fort is currently under renovation, but it has an imposing façade that is fully visible from the church ruins.

The basilica is quite massive. The foundation covers an area of more than 400 by 200 feet and, when it stood, the church reached a height of over 90 feet. Here’s a model of what the basilica looked like before it was destroyed (some say by Mongols, others say Seljuk Turks); the model is laid out just like the ruins which you can see in the background. 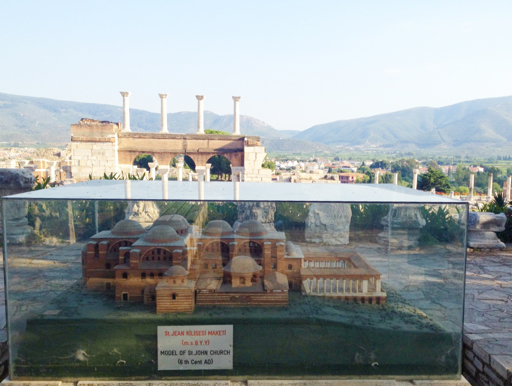 Although the domes are long gone, you can see that several of the interior columns stand; whether they are reerected or have been standing for all this time, I don’t know. At any rate, here’s a picture of the ruins of the Nave…

…and here’s a view looking just to the right of the above photo, taken from the same vantage point, showing the courtyard.

Here’s a photo looking into the basilica from the courtyard that, I hope, captures the enormity of the building. The placards say that if the Basilica of St. John still stood, it would be the 7th largest cathedral in the world.

Inside, there’s a full immersion baptismal pool that predates the basilica by 100 years.

But the most significant artifact is the Tomb of St. John, the Apostle, around which the church was constructed and in whose honor it was dedicated.

John was one of the first disciples to follow Jesus, along with his brother and fellow fisherman, James. John sits next to Jesus in the famous painting of the Last Supper. After the crucifixion, around 43 A.D., King Herod began to persecute Jesus’ disciples, executing John’s brother, James. All the remaining disciples fled Jerusalem, including John, who supposedly took the Virgin Mary with him and settled in the Roman city of Ephesus.

We visited Ephesus today. Ephesus is ancient and its location has not been static; it has been moved and rebuilt four or five times, primarily a result of the silting in of the harbor. The last location of Ephesus is surrounding and including Ayasuluk Hill, the location of the Basilica of St. John and the modern town of Selçuk.

In Esphesus, St. John supposedly wrote the Gospel of John (you know, Matthew, Mark, Luke and John), the three epistles of John, and the book of Revelation, also known as the account of the Apocalypse. Modern scholars do not agree on this authorship, nor do they agree on whether or not St. John was actually buried on Ayasuluk Hill. All agree, however, that John the Apostle did live for a time in Ephesus.

We were finally kicked out of the basilica at 6:30, closing time.

On our way to dinner on the rooftop of the Hotel Bella (where we’ll be staying on our last night here in Selçuk) which is directly across the street from the gate to the basilica, we noticed some funny looking birds nesting atop the ruins. 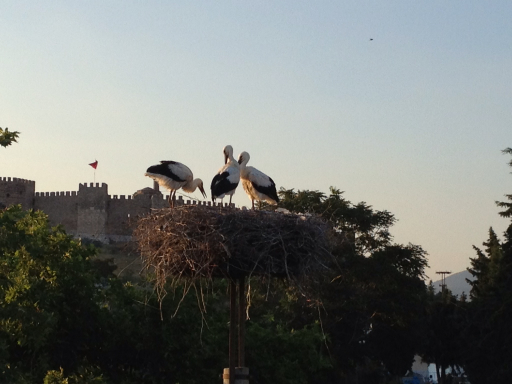 Now we know where babies come from: Ayasuluk Hill!