Last night at dinner, we were introduced to Tom and Linda, a couple from Sonoma Valley, California, by Nazmi, the owner of our hotel, for the purpose of sharing a guide for a tour of Ephesus. Ephesus is known as the best example of a complete Roman city; not only in Turkey, but anywhere around the Mediterranean.

Supposedly, based on the type of artifacts found here, this area was settled around 6,000 B.C. The real history of the place begins, however, around the 6th century B.C. when Ephesus was settled by Ionian Greeks that were fleeing from the Dorian Greeks. The city was originally developed as a Greek city, although it was later taken over by the Romans in the 2nd century B.C.

And so, today we spent five hours walking the streets of the ancient city of Ephesus. I mean that literally. We spent five hours walking the streets of Ephesus, from one end to the other. There are four primary, connecting streets that from end to end must be at least a mile long: the Royal Walk; Curetes Street; Marble Street; and, Harbor Street, also known as Arcadian Way. We entered at the highest point of the city, where the Upper Agora and the Odeon meet, joined by the Stoa and its Royal Walk.

The structure that looks like a theater in this picture is actually called the Odeon, a small theater used primarily for governmental meetings and small performances. It differs from the Theater, which is further down the hill, by its size (seating for 1,500, whereas the Theater seats an incredible 25,000), and for the fact that when it was in use it was small enough to sport a roof.

From the top of the Odeon, I took this picture back toward the Upper Agora which was a marketplace and public square. In the foreground, note the columned street. 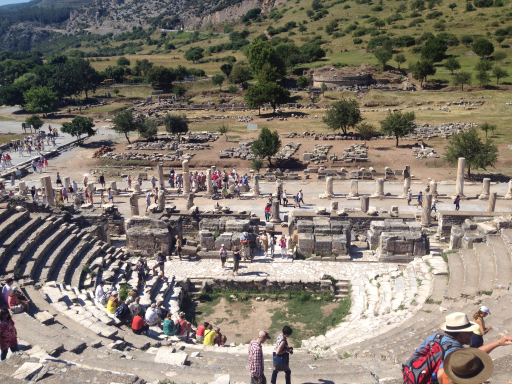 That columned street was called the Royal Walk and it was actually a two-story, roofed (but open) Stoa where merchants sold their wares to pedestrians passing between the Upper Agora and the Odeon. Here’s the Royal Walk, the beginning of our stroll with Tom and Linda, and our guide, “John.”

But, before we get started, I wanted to point out one other feature on the top of the hill: the waterworks. In the picture below, taken across the Upper Agora, there are three features of note. About midway up the hill (and barely visible at this distance) is a lone, remaining column of the Aqueduct that brought water to Ephesus. The large, circular building across the Agora was a cistern where that water could be stored. And, in the foreground you can see several of the waterlines that carried water from these waterworks, down to the city. 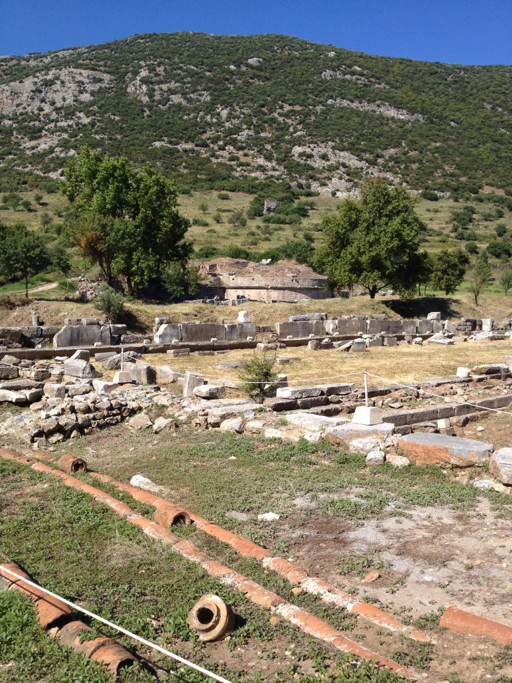 Those ceramic water pipes are worth a little comment, too. The pipes were made in uniform sections, cast in molds, one end being female and the other male so that they could be easily joined with a little glue made of egg white, sand and water. The pipes were also made in different diameters, as you can see in this picture:

Now, let’s get going. At the end of the Stoa, the Royal Walk becomes Curetes Street and starts a gradual descent. Actually, from this point to the end of Curetes Street, the road drops 60 feet. As we descend, the wall on the left dates back to the ancient Greeks, probably 4th century B.C.

Perhaps halfway down Curetes Street, I turned around and took this picture back up. Although you can’t see it, water pipes run along under the street, as does a large sewage drain that continues all the way to the end, emptying into the harbor.

Also at this point, I climbed up on some stones along the side of the street and took this picture of the end of Curetes Street where it intersects with Marble Street in front of the Library of Celsus.

We continued our walk down toward the intersection…

…to this point, at the Temple of Hadrian… 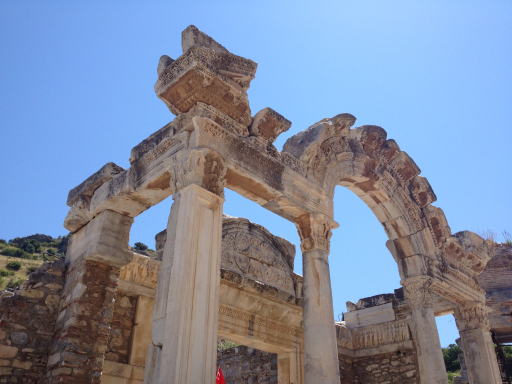 …where it looked like a tour bus full of Japanese tourists had just stopped. Here, I turned around and took a picture back up the hill.

To my right, but out of sight in this photo, were several Roman villas that were under reconstruction. I will skip them for now because they will be the subject of a separate post.

…then stopped to take a peak at the ancient public toilets. It gives a whole new meaning to the phrase, “party-pooper.” 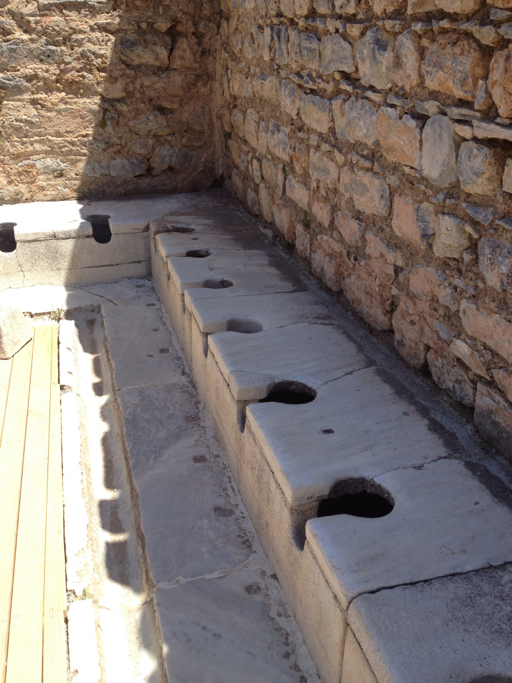 The Library of Celsus, like most of the buildings in Ephesus, was destroyed by earthquakes; however, in 1976, the Library was re-eretected from the broken pieces. And they did a rather incredible job, I must say. 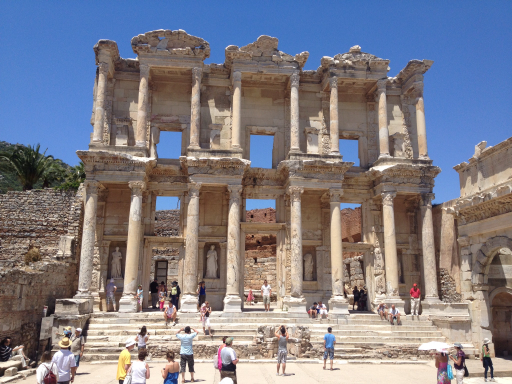 We entered the Theater, from which I took this picture down Harbor Street where, 1/4 mile away, boats used to unload before the harbor silted up in the 7th century A.D. 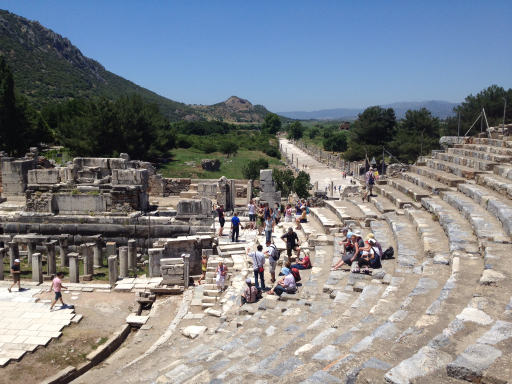 Shops and eating places lined Harbor Street on both sides back in the old days.

Our walk concluded just a few hundred yards down Harbor Street, where I turned and took this final picture of the Theater.

At its peak, Ephesus was home to 250,000 free men; together with their slaves and the surrounding “suburbs,” there were supposedly over 1,000,000 people living here.

Besides John the Apostle and Mary, mother of Jesus, Luke and Paul evangelized in Ephesus; the Apostle, Luke, is supposedly entombed here and Paul was sent from this place to Rome where he was executed.

It was a fascinating day and I have spared you our many trips up the side streets and alleys and all the buildings, monuments and fountains that lined the main roads. Much of that was similar to what we have already seen elsewhere. But the Roman villas were something else, entirely.