In my last post, I mentioned the Roman villas in Ephesus on Curetes Street, opposite the Temple of Hadrian. We’ll start this post at that point, on the left hand side of Curetes Street, slightly more than 3/4 of the way down toward the Library of Celsus. Here, the Romans constructed multifamily residences on the slope of the hill, lining an elevated promenade covered with mosaics.

These houses, being near the very heart of the city, were the residences of the rich and famous, that is, the wealthy and political class, who spared no expense in the construction and decoration of their homes.

The first houses we came across, accessible from the street, were interesting, but they had been heavily damaged by earthquakes over the years.

But notice that modern structure in the background in the above photos? That is an active archeological dig, covered by a huge cable and canvas roof constructed in 1979, known as Terrace House 2.

The first level, being dwelling units 1 and 2, has been uncovered and restored and is now being used by the restoration crew as a staging area for reassembling the marble slabs that cover the walls of some of the dwellings.

You can see that the mosaic floors have already been uncovered on this level.

These dwellings were built in a peristyle design, that is, there was a central (and typically, columned) courtyard, open to the sky. All of the rooms of the house opened onto this courtyard, which supplied light and ventilation. In the restoration, it looked like the courtyards were identified by the wooden beams forming rectangles connecting the columns. 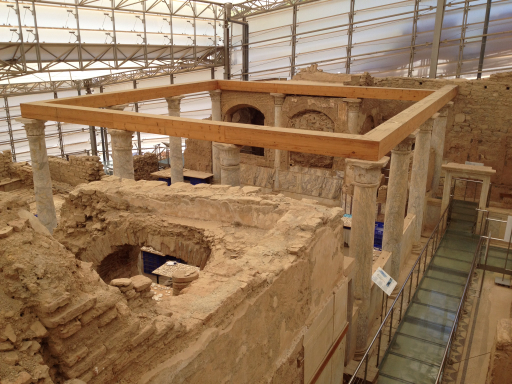 …to reveal painted walls and mosaic floors underneath.

On the ground floor of each villa, the rooms surrounding the courtyard were typically the dining room, living room, toilet, bath/sauna, kitchen and perhaps, slave quarters. Here you can see the doors to two rooms (top and right), opening onto the courtyard to the left.

We climbed all the way to the top of the second story of the third and highest terrace so that we could get the best view. The bedrooms would have all been on the second floor of each villa. 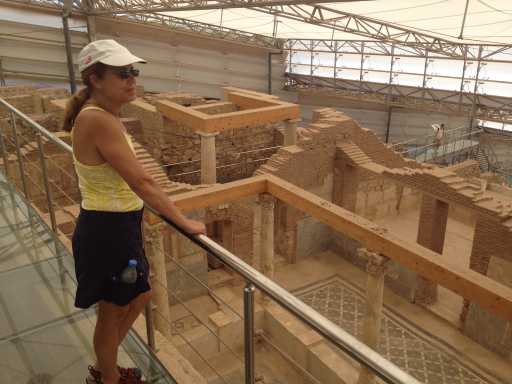 Some of the floor mosaics were great works of art:

These villas were pretty amazing. Through the use of raised floors, under which heated air was forced, most of the rooms had central heating. They all had full indoor plumbing with piped-in hot and cold running water, controlled by faucets, just like we do today, as well as sewage lines that took waste down to the central disposal system that ran under the street to the harbor.

Kind of like the way the bottom 1% lives today.