The Seven Wonders of the Ancient World no longer exist, except for a pyramid or two in Egypt. On this trip, we’ve seen where two of the seven previously stood: the Temple of Artemis in Ephesus; and the Statute of Zeus in Olympia. All that remains of the Temple of Artemis is a lone, reerected column that was so unimpressive that I didn’t even bother to photograph it. However, while the Statute of Zeus may be gone (it stood 40 feet high and was gold-plated), the ruins of the temple that housed it in Olympia are extensive.

Here’s a picture of the foundation of the Temple of Zeus, in the process of being restored. The column you see was reerected from original components for the 2004 Olympic Games, held in Athens. The temple was originally constructed in 460 B.C.

To give you an idea of just how big this temple was, here’s a picture of me leaning against one of the capitals, what I would call a column capstone, the square thing on the top of the standing column in the picture, above.

The temple was 13 columns long and 6 columns wide. Here’s a picture taken along the temple’s length.

Back in the museum they had the friezes that covered the front and rear of the temple, depicting the Twelve Labours of Hercules. 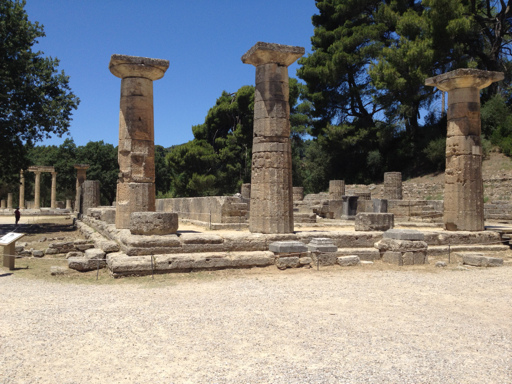 When we returned to our rental car, a Volvo S40, we saw that we had parked next to another amazing column, this one honoring the God of Nature.