The southeastern district of the Big Island of Hawaii, called Puna, is known for its eclecticism and for the fact that it is the easternmost point in the Hawaiian Islands. On Thursday, we drove to Puna, about an hour away, intending to spend the morning at a local’s beach known as the Champaign Pond.

On the way, we came upon Lava Tree State Park and decided to stop to see what a “lava tree” might be. Answer: When lava flows through forests, you would expect all the vegetation to simply burst into flames. But, some of the larger trees contain so much moisture that they don’t immediately ignite. Instead, they burn slowly and, as the lava that first encounters the tree trunk cools, more liquid lava flows around the tree, enveloping it and the cooling lava. After all the lava cools and hardens and the tree trunk burns to ash, what remains is a lava mold of the lower part of the tree: a “lava tree.” Here are two examples:

It was a nice walk through Lava Tree S.P., about a half-mile loop through the regrowth forest, covered with giant tree ferns. A different, but similar, variety surrounds Hale Mauka, the house we’re staying in.

Leaving Lava Tree, we continued on to the end of Highway 132. The paved road ends about two miles before the point at Cape Kumukahi, the easternmost tip of Hawaii, but we were in a 4-wheel drive Jeep, so we continued to the end on the dirt road. Reaching the point, we stopped to look at the rugged, volcanic shoreline. By the way, that tower in the distance on the left, the Cape Kumukahi Lighthouse, is the only thing that survived the lava flow back in 1960 that created this lava field (over 100 houses were destroyed).

Dale spotted a green turtle in the surf.

We continued, following the shoreline over a volcanic gravel road to Champagne Pond. The road was cut through the lava, which came up to the top of the car door as we drove through. 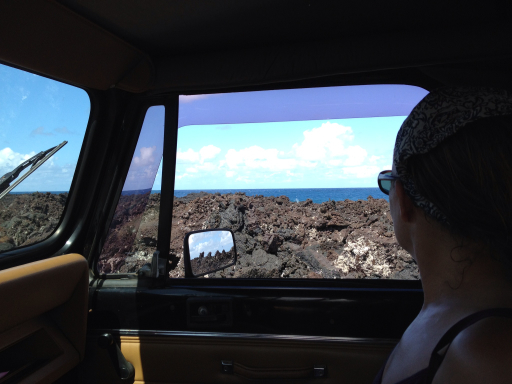 Champaign Pond can be accessed only one of two ways: through a gated community (only by the residents); or via 4-wheeler, the way we came. This swimming hole (I can’t really call it a beach) is popular with the locals because it is feed by a thermal spring that flows into the ocean, making the water brackish and warm. There were a bunch of Hawaiian families enjoying themselves here when we arrived. I doubt many tourists find this place or have much luck getting to it.

There was a little surf break and one of the dads paddled out on his longboard with his little girl in his lap to do some paddle surfing.

We lounged around for about an hour and went for a swim, but the water didn’t really feel all that much warmer than the ocean to us. The thermal springs aren’t always flowing and this must have been one of the days when they weren’t, since we stopped at another thermal pool after leaving Champaign Pond and it was even colder. But the cool water was refreshing after laying in the sun.

The water was as clear as the air, which is saying something since the guidebooks claim that scientists that have studied the issue have found that Kumukahi Point has the cleanest air in the world!