Our trip to the Waipi‘o Valley yesterday was our main stop on a drive to see the two northern volcanos, Kohala and Mauna Kea.

Starting from Volcano Village, we first drove through Hilo where we stopped to look at the statue of Hawaii’s great King, Kamehameha I.

Kamehameha the Great (b.1758-d.1819) was King of the Big Island of Hawaii when Captain Cook landed in 1779. He was also the king that unified all the Hawaiian islands into one “nation” in the early 1800s, which gave him the nickname, “Napolean of the Pacific.” He is highly revered here by the native Hawaiians.

Just north of Hilo there was a very scenic drive along the coast. This side of the island, the eastern side, gets a lot of rain, which we have experienced daily during our time here.

Along this side of the island, we drove past a number of hidden bays and crossed several “gulches:” dead end valleys, like the one at Waipi‘o. 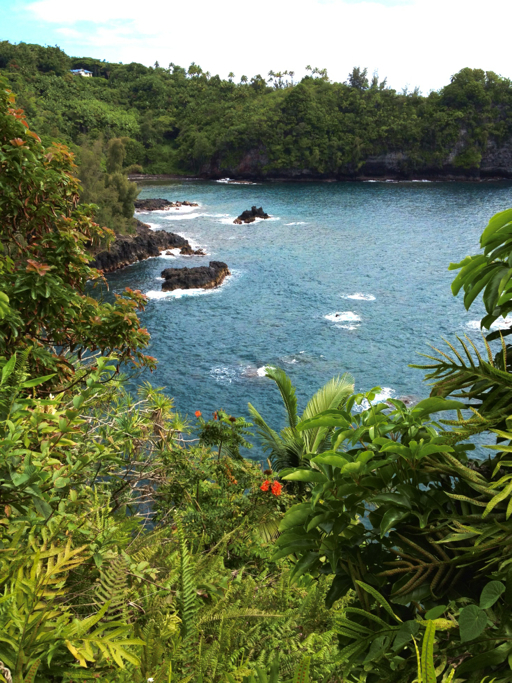 The ocean on this day was relatively tranquil.

After our surfing safari at Waipi‘o, we drove through the town of Waimea, then turned north, driving along the side of Kohala mountain to the town of Hawi, where we stopped for coffee and where I bought a new ukulele.

As I mentioned a couple days ago, Kohala is the oldest volcano on the island of Hawaii, dormant now for over 60,000 years. Consequently, this area has less exposed volcanic rock, more soil and vegetation and is more gently rolling than the volcanoes on the southern part of the island.

Here are a couple photos of the Kohala region to give you an idea of the contrast to the southern coast.

As we drove south from the village of Hawi (by the way, King Kamehameha was born near Hawi), the terrain became much drier than anything we had seen on the eastern or southern coasts.

This was clearly ranch land.

As we headed back mauka (“toward the mountain”), the changes continued: 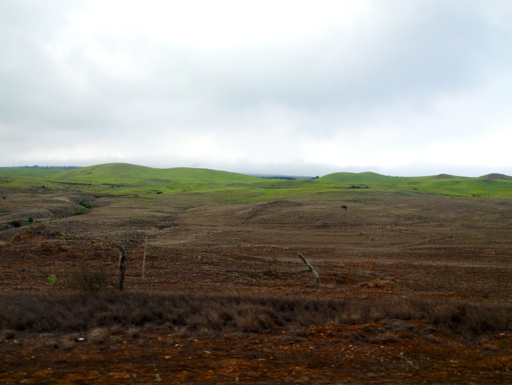 Then, as we started our ascent back to Waimea, we left the arid lands behind as we entered the huge Parker Ranch lands that cover the interior of the island.

Highway 200, the road from Waimea back to Hilo, is called the Saddle Road, and I’m guessing that’s because it passes (at an elevation of 6,632 feet) between the two highest volcanoes on the island: Mauna Kea, to the north; and, Mauna Loa, to the south. It may also be that “saddle” might also refer to the fact that this is cattle and horse country. In fact, Dale and I both had the sensation that we were somewhere in Texas or the American Southwest.

And then it started to rain and either fog or low-lying clouds drifted in, nearly obscuring all visibility.

We had to slow to a crawl for about an hour, finally making our way back down to Hilo and, ultimately, home to Hale Mauka, where I learned that Saddle Road is known as the most dangerous road on the island because of the fog, the numerous one-lane bridges and the condition of the pavement. I would agree, but for the fact that I had already driven down the road to Waipi‘o Beach; that one gets my vote.