We’ve been traversing Maine via U.S. Highway 1, known to us in the Florida Keys as the “Overseas Highway,” but here along the North Atlantic coast, referred to as the “Atlantic Highway,” and also, occasionally, as “Maine Street” (those clever New Englanders).

At any rate, as we left our Walmart camping site in Rockland, Maine, this morning, we ignored the GPS (which told us to go inland) and, instead, continued South on U.S. 1. 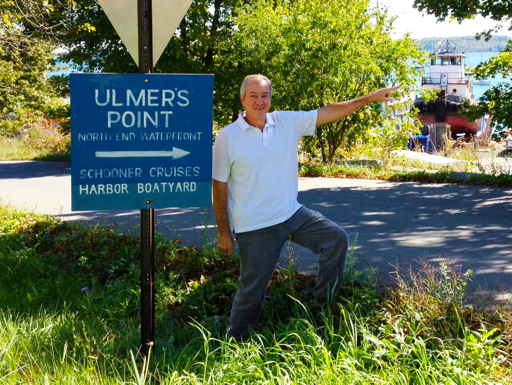 We stopped to take a picture, then walked down to the shipyard on the point and asked, “Is this Ulmer’s Point?”

The lady we asked said, “Well, the city council says it is, and they put up those signs, but it’s really not; Ulmer’s Point is down the road somewhere. And there aren’t any Ulmers around here anymore, either.”

“Well, we replied, there are now.”