Fort Niagara sits at the mouth of the Niagara River where it empties into Lake Ontario; Niagara Falls lies up river several miles, between Fort Niagara and Grand Isle. The Niagara River is, of course, impassible at this point because of the Falls, but the location of the fort has been strategic, historically, because it is the location of the shortest portage between the Lake and the River, circumventing the Falls.

The French undertook the original construction of a structure at this location in 1726 with the consent of the Iroquois Indians, calling the building the “House of Peace” and asserting that it was to be, primarily, a trading post, though, in reality, it was constructed to function as a barracks and fort.

The Fort has been enlarged and rebuilt over the years. We entered through the main gate. 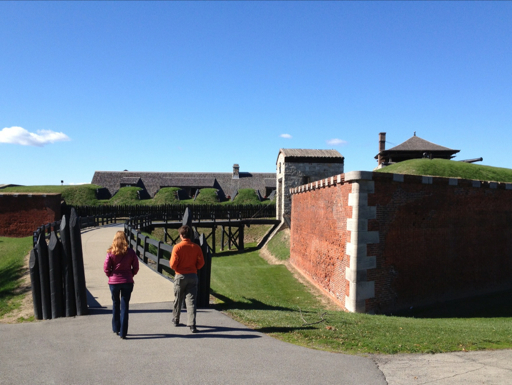 Once inside the fortress walls, we could clearly see the original 1726 structure, renamed the “French Castle” by the British years later, due to its appearance.

The French gave up the Fort to the British in 1759 after their defeat in the French & Indian War and the British added two blockhouse-like towers, reinforcing the artillery installations that faced inland to protect against potential American attackers during the American Revolution.

We climbed up into one of these redoubts; there was a great view of the Niagara River and of the Fort’s landward defenses from there. 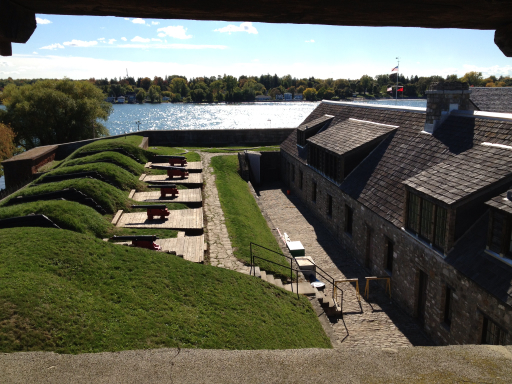 The British held Fort Niagara from the end of the French & Indian War until the end of the American Revolution, during which many British Loyalists fled to the Fort for protection.

The Treaty of Paris at the end of the Revolution settled the separation of the American colonies from England and ceded the Fort to the Americans, but the British didn’t physically turn the Fort over until 1796, thirteen years after the end of the war, at which time the British built Fort George on the opposite bank of the Niagara River in Canada.

We climbed down from the redoubt, then back up on the fort walls where Trevor tried to re-aim one of the cannons…

…and we took a partial family portrait atop the wall.

In the early 1800s, the British and the Americans went to war again. The War of 1812 was fought mainly along the Great Lakes, although the British also landed in the Chesapeake and advanced to and burned the nation’s Capitol in Washington, D.C.

In May 1813, the Americans captured Fort George on the Canadian side of the Niagara River, but in December, the British launched an attack, retaking Fort George and capturing Fort Niagara, holding them until the end of the war, at which time they were given back to the Americans in the Treaty of Ghent which ended the War of 1812. Fort Niagara has been in American hands ever since.

While we were at Fort Niagara, we got a history lesson about the uniforms and firing procedures used by the Americans in the War of 1812. The presentation was both informative and humorous, our “teacher” explaining that the tall hats were intended to make the soldiers look bigger to the enemy with the crossed white uniform belts forming an “X” target on each soldier.